With less than two months until the 2014 elections, the political falsehoods are rolling in. Consider the Colorado Senate race, between incumbent Democrat Mark Udall and his Republican challenger, Rep. Cory Gardner. Trying to brand himself as just as green as Udall (a longtime clean energy champion), Gardner recently ran an ad claiming that as a state senator in 2007, he “co-wrote the law to launch our state’s green energy industry.”

But when 9 News, Denver’s NBC affiliate, fact-checked the ad, it found the law Gardner was touting didn’t accomplish much at all to promote green initiatives. Asked for a statement, Gardner’s campaign responded, “Cory says that he co-wrote a law ‘to launch our state’s green energy industry,’ not that launched it.'” (The emphasis is Gardner’s.) In other words, the impression given by the ad is just wrong, as the Gardner campaign winkingly admits! “Folks, we honestly do not know if we have ever seen such a frank acknowledgement of purposeful deception from an American politician,” commented the local politics blog ColoradoPols. You can watch the 9 News segment here.

Gardner comes off, in this instance, as reminiscent of GOP pollster Neil Newhouse. While working for Mitt Romney in 2012, Newhouse infamously declared, “We’re not going to let our campaign be dictated by fact-checkers.” Gardner’s cavalier response, like Newhouse’s brazen statement, raises the fear that despite a voluminous growth of fact-checking in the past half decade, there’s really nothing the media can do to keep politicians honest. But is that really true?

Not according to Dartmouth political scientist Brendan Nyhan, who has focused much of his research on employing the tools of social science to figure out why fact-checking so often fails, and what can be done to make it work better. The cynical view on fact-checking is “too negative,” argues Nyhan on the latest installment of the Inquiring Minds podcast. “I think you have to think about what politics might look like without those fact-checkers, and I think it would look worse.”

Nyhan hasn’t just been studying the fact-check movement; he was there at its origins. In the early 2000s, he coauthored a site called Spinsanity.com, a nonpartisan fact-checking outlet. It was the beginning of a wave: In 2003, the Annenberg Public Policy Center at the University of Pennsylvania launched FactCheck.org. But the real fact-checking movement kicked into gear in the late 2000s, with the launch of PolitiFact, by far the most widely known of these outlets, as well as the 2007 launch of the Washington Post fact-checker column, now written by Glenn Kessler. 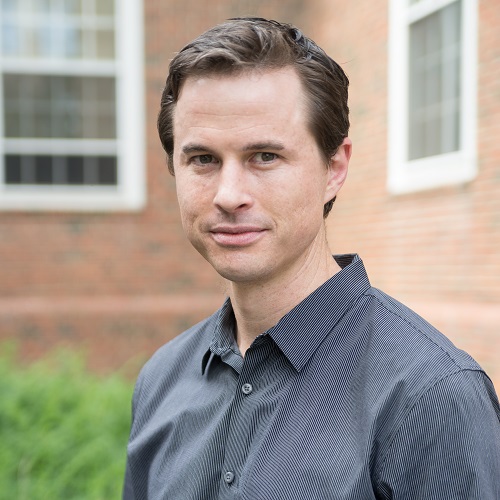 As a result, in the last few years, a huge volume of claims have been given one to four Pinocchios by the Post, or declared “True,” “Pants on Fire,” or somewhere in between by PolitiFact. That includes the repeated debunking of the last half-decades’ mega-lies: birtherism, for instance, and claims about the Affordable Care Act creating “death panels.” So what does the evidence show about this endeavor?

First the good news: Overall, the fact-checkers have reinforced the idea that reality exists, and journalists are capable of discerning what it is. That may seem obvious, but it’s actually worth underscoring that we don’t live in a postmodern nightmare of subjectivity. “The fact-checkers, when they rate the same content, come to the same conclusion a very high percentage of the time,” says Nyhan. “So that’s a good indication that they are seeing the evidence and interpreting it in a consistent way.” For instance, FactCheck.org, PolitiFact, and the Post‘s Kessler all refuted Sarah Palin’s “death panel” claim; PolitiFact dubbed it the “lie of the year” in 2009.

That’s not to say that fact-checkers are themselves entirely unbiased. PolitiFact in particular has been repeatedly criticized for false equivalence in how it treats the left and the right. It’s just to say that they largely agree with one another, suggesting that facts are, for the most part, discernible.

The Backfire Effect
A far tougher issue, though, is whether minds change when fact-checkers make their pronouncements. On the level of individual psychology, repeated studies by Nyhan and others have shown that it is very hard to correct a misperception once it is out there in the media ether. We’ve previously reported on the so-called “backfire effect,” discovered by Nyhan and his colleague Jason Reifler of the University of Exeter. Again and again, they’ve found in experiments that trying to correct certain false claims that are highly politically charged—the claim that tax cuts increase government revenue, for instance—often just doesn’t work. Partisans can actually become stronger in their wrong beliefs upon encountering a refutation.

Consider the data, for instance, when Nyhan and Reifler attempted, in a classic study, to get partisans to change their minds about the tax cut claim (which they attributed to George W. Bush). In the experiment, participants were shown a fake newspaper article containing an actual George W. Bush quotation: “The tax relief stimulated economic vitality and growth and it has helped increase revenues to the Treasury.” In one version of the experiment, the article then contained a correction, refuting this claim; in another version it did not. It turned out that conservatives who read the correction believed Bush’s falsehood more strongly than did conservatives who never read the correction: 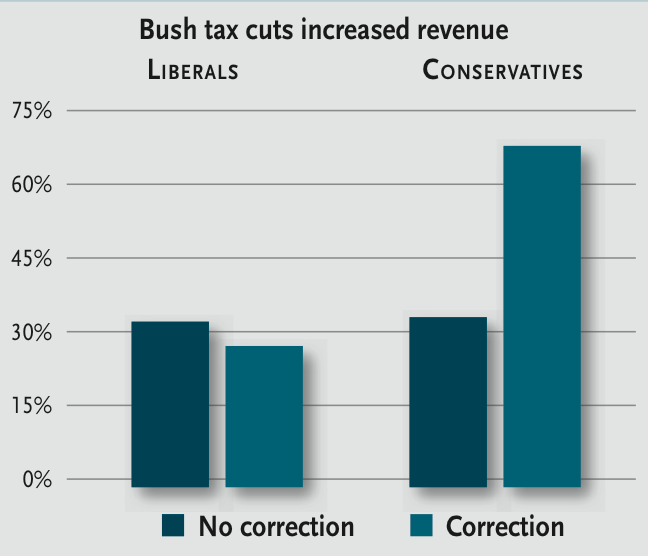 And that’s just the beginning of the difficulties related to correcting errors and making the corrections stick in people’s heads. Nyhan also notes that much research suggests that negating a claim (“the Affordable Care Act doesn’t create death panels”) actually has the effect of reinforcing it in our minds (“there are death panels”). “We should be pretty cautious about how high our hopes are for changing people’s minds,” he says. “Once those myths are out there, it’s very hard to change people’s minds.”

Fact-Checking As Deterrence
Such are some of the reasons to question the power of fact-checking. So then why does Nyhan think a world with fact-checking in it is way better than one without it? The answer is that it’s not so much about changing the minds of the partisans as it is about deterring the politicians. “They’re so often the vehicle for these myths,” Nyhan says. “If they know they’ll be called out publicly, they may not reinforce or disseminate these myths in the first place.”

So what about fact-checking as deterrence? Does it work? After all, no politician wants the campaign narrative to revolve around allegations that he or she is a liar, or detached from reality.

Mother Jones‘ David Corn has made the case that in the 2012 election, politicians like Mitt Romney just weren’t deterred. And it may well be that on the national level, and especially on the presidential level, politicians get fact-checked so often, and fact-checkers try so hard to spread around the opprobrium, that ultimately it’s a wash.

However, on the local level, this stuff seems to really matter. Nyhan and Reifler provided data to support this idea in a 2013 New America Foundation study. During the 2012 election cycle, they sent letters to 392 state legislators who had PolitiFact affiliates in their states. The letters simply noted that the politicians’ statements might be fact-checked, and that there were reputational risks associated with getting a poor rating. “We sent them a lot of letters,” Nyhan explains. “Some of them became very sick of hearing from us in the mail, as we sent them letter after letter, reminding them just what a significant threat fact-checking could be to them.” Two other groups of legislators, of similar size, received either no letters or a “placebo” letter saying the authors were studying how accurate politicians are, but didn’t bring up reputational risks or fact-checking.

The study found that the warning letters had a statistically significant effect: Legislators who received them were less likely to have their accuracy questioned by PolitiFact, or by other news sources found in a Lexis-Nexis search. Of course, it was also extremely unlikely for any legislator to be fact-checked at all. Thus, the risk declined from just under 3 percent down to 1 percent: 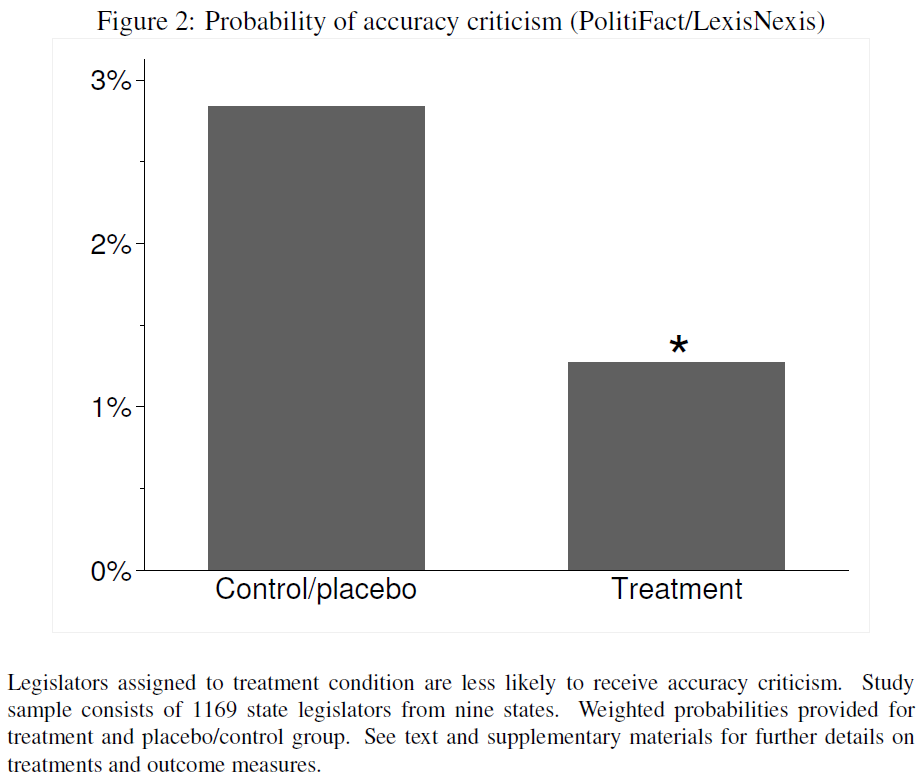 From Nyhan and Reifler, “The Effects of Fact-Checking Threat: Results from a field experiment in the states,” New American Foundation Research Paper, 2013

To Nyhan, this suggests that fact-checking can serve as a deterrent, and can be a particularly big deal in local as opposed to national races—which means it matters in 2014. Indeed, in one case, fact-checking already appears to have significantly damaged a campaign. In Alaska, incumbent Democratic Sen. Mark Begich ran an ad suggesting his opponent, former state Attorney General Dan Sullivan, had not been tough enough on sex offenders, going on to state that one of them got out of prison early and went on to commit a horrific crime—a sexual assault and double murder. But PolitiFact rated the ad’s claims “pants on fire,” finding that Sullivan was not responsible for the suspect’s release. Begich’s campaign soon pulled it off the air.

In other words, the ad itself became an issue, and Begich has had to contend with a major backlash, as well as the black eye of having to pull an ad.

To Nyhan, that’s the whole point. Backfires and biases notwithstanding, there remains the potential for a prominent factual correction to cause a media furor, and, in some case, to damage a politician’s reputation. Partisans may stick with their candidate, but they’ll be sticking with a candidate who has been forced to play defense.

So facts work—kind of. Sometimes. Even if politicians try to avoid them.

“I think fact-checking has caused big important changes in how we cover the news now,” Nyhan says, “and it’s gotten especially the younger generation of reporters much more interested in going beyond that ‘he-said, she-said’ reporting.”

To listen to the full podcast episode with Brendan Nyhan, you can stream below:

This episode of Inquiring Minds, a podcast hosted by neuroscientist and musician Indre Viskontas and best-selling author Chris Mooney, also features a discussion of a new study suggesting that religious and nonreligious individuals are equally moral, and new research on gender discrimination in job performance evaluations, particularly by men with traditional views of gender roles.

To catch future shows right when they are released, subscribe to Inquiring Minds via iTunes or RSS. We are also available on Stitcher. You can follow the show on Twitter at @inquiringshow and like us on Facebook. Inquiring Minds was also recently singled out as one of the “Best of 2013” on iTunes—you can learn more here.