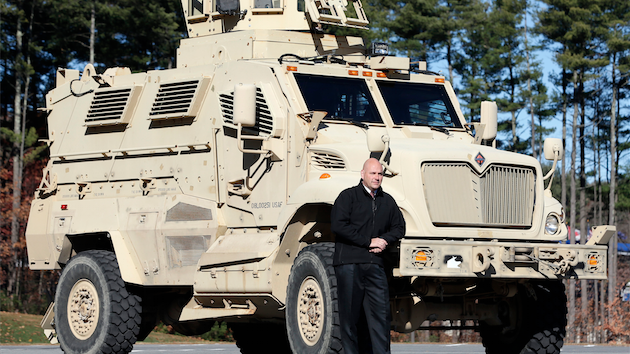 An example of the mine-resistant ambush protected vehicle that San Jose, Davis, and the San Diego school district police are trying to return to the Pentagon.Mike Groll/AP

An officer with the Chelan County Sheriff’s Department in central Washington is offering me a tank. Three of them, actually.

“We really want to get rid of these,” Undersheriff John Wisemore says. “We’ve been trying to get the military to take them back since 2004.”

The tanks came from a vast Defense Department program that has furnished American police arsenals, at no charge, with $4.3 billion worth of combat equipment leftover from two foreign wars. The tanks are amphibious, capable of firing 107-mm mortars—and not remotely useful to Wisemore’s rural police department. But the county can’t seem to unload them. Back in June, Wisemore got an email from a Defense Department liaison promising to explain how Chelan County can get rid of the tanks. Then, nothing. Until further notice, Wisemore says, “they’re just going to sit there.”

In the past eight years, the Pentagon program has loaned local law enforcement some 200,000 ammunition magazines, 94,000 machine guns, and thousands of armored vehicles, rifles, aircraft, land mine detectors, silencers, and grenade launchers—all at the request of the local agencies themselves. But images of the unrest in Ferguson, Missouri, of police in military gear cracking down on peaceful protesters, have turned many communities against a program critics say has eroded the line between police officers and soldiers. Recently, in response to the local outcry over aggressive policing tactics, San Jose, California’s police department announced plans to return its mine-resistant, ambush-protected vehicle (MRAP), and the Los Angeles school system police department has agreed to return its three grenade launchers.

Law enforcement agencies across the country have quietly returned more than 6,000 unwanted or unusable items to the Pentagon.

Even before police militarization made the news, hundreds of police departments were finding that grenade launchers, military firearms, and armored vehicles aren’t very useful to community policing. When Chelan County police officers requested one armored car in 2000—the request that landed them three tanks—they pictured a vehicle that could withstand bullets, not land mines. Law enforcement agencies across the country have quietly returned more than 6,000 unwanted or unusable items to the Pentagon in the last 10 years, according to Defense Department data provided to Mother Jones by a spokeswoman for Sen. Claire McCaskill (D-Mo.), who has spearheaded a Senate investigation of the Pentagon program that is arming local police. Thousands more unwanted items have been transferred to other police departments.

But some agencies have found the process of getting rid of unwanted military gear next to impossible. Agencies can’t return or trade large pieces of tactical equipment without Defense Department approval, and because the Pentagon technically still owns that equipment, they can’t sell it.

According to interviews with state officials running point between the Pentagon and police, the Defense Department prefers to leave equipment in circulation whenever possible. “It’s a low-cost storage method for them,” says Robb Davis, the mayor pro tem of Davis. His town is trying to shake its MRAP. “They’re dumping these vehicles on us and saying, ‘Hey, these are still ours, but you have to maintain them for us.'”

Police departments, in most cases, bear the costs of shipping the equipment to its new home. Ursula Kroener, a police spokeswoman for the San Diego school district police department, says she was told by the office in California that facilitates the military transfer program that San Diego would have to wait to begin the process of returning its 18-ton MRAP because the Defense Department had closed the portion of its website that allows police departments to request returns until October 1. Kroener adds that she was told that the Pentagon halted returns partly because so many law enforcement agencies are clamoring to return their equipment. The California liaison for the Defense Department transfer program did not reply to requests for comment. A spokesman with the Defense Logistics Agency, the division within the Pentagon that oversees the surplus program, says that none of the division’s websites have been down for more than a few hours for updates.*

A Defense Logistics Agency spokeswoman says that law enforcement agencies are free to return equipment as long as they complete the right paperwork. She adds that certain pieces of equipment, such as night vision goggles, require extra certification to return. As examples of what might cause the Defense Department to reject a return, she lists only two: incorrect paperwork, and lack of that extra certification.

In reality, however, police departments may find the returns process slow, mystifying, or nonfunctional. Online law enforcement message boards brim with complaints that the Pentagon refuses to take back unwanted guns and vehicles—like this one, about a pair of M14 rifles that have survived attempts by two sheriffs to get rid of them.

“The federal government is just not interested in getting this stuff back,” says Davis Trimmer, a lieutenant with the Hillsborough, North Carolina, police department. Local law enforcement officials and Pentagon liaisons interviewed by Mother Jones all agree that the Defense Department always prefers to keep working equipment in circulation over warehousing it. Trimmer has twice requested permission to return three M14 rifles that are too heavy for practical use. But the North Carolina point person for the Pentagon insists that Hillsborough can’t get rid of the firearms until another police department volunteers to take them. Police in Woodfin, North Carolina, are facing the same problem as they try to return the town’s grenade launcher.

“The federal government is just not interested in getting this stuff back.”

In fact, the first move for state liaisons when a police department wants to dump its military equipment is to alert the rest of the state’s police force that the item is up for grabs. This poses a moral dilemma for communities that are getting rid of their weapons and armored vehicle out of protest: ditching your MRAP just makes it another town’s problem.

“I have a lot of discomfort about that,” Davis says. “A lot.” Jarred by the clashes in Ferguson, the Davis city council voted in late August to come up with plans for getting rid of the city’s newly acquired MRAP—which arrived with the machine gun turret still attached.

But officials in Davis are finding that the cheapest way to unload the armored vehicle may be to ship it to a police department in a neighboring town. At best, says Davis, the Defense Department will ask the city to ship the vehicle to a police department out of state. “The bottom line is, if we send it back, we know what will happen to it. It will go on to be used in another community,” Davis says. “In the broader scheme of things, we will not have done anything but make a symbolic gesture.” At least two law enforcement agencies, both located in Northern California, have already expressed interest in the MRAP.

“The bottom line is…it will go on to be used in another community.”

The Pentagon’s policy, of keeping military surplus equipment in circulation, is how Saginaw County, Michigan’s mine-resistant vehicle became Lapeer County’s mine-resistant vehicle—that’s the county right next door. In fact, when word got out that Saginaw County wanted to get rid of its MRAP—after John Oliver made fun of Saginaw on his HBO show, Last Week Tonight—Sheriff William Federspiel received a flood of calls from other police departments, asking, “Hey, can we have it?”

The spokeswoman for the San Diego school district doesn’t know who previously possessed its MRAP, but she says the vehicle arrived from Texas stripped of its gun turrets and interior instruments—signs that it had been modified for police use by the last owner. When Steuben County, in rural New York, no longer wanted two armored vehicles, it sent one to the nearby Broome County Sheriff’s Department and one to the village of Endicott. And the tanks that Chelan County, Washington, wants so badly to get rid of came from the police department in Vancouver.

Where the tanks will go next is anyone’s guess.

“We’ve put it out there that we don’t want these anymore,” says Wisemore, the undersheriff. “But I don’t think any other agency is interested in them.” He pauses. “Are you?”

This piece has been updated to reflect a statement from a Defense Logistics Agency spokesman.