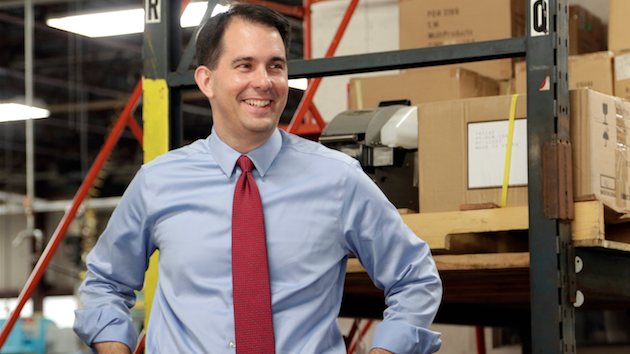 As Republican Gov. Scott Walker fights a tough reelection battle in Wisconsin, a controversial Iowa-based super-PAC has begun a campaign to persuade minority voters to support the embattled incumbent. The group, America’s PAC, plans to spend up to $200,000 to air thousands of one-minute radio ads in Wisconsin urging black and Latino voters, who traditionally support Democrats, to turn out for Walker, and it has the financial backing of a prominent tea party millionaire.

But the PAC’s message is not always syncing up with Walker’s homestretch effort to distance himself from far-right social conservatives.

One ad the group is running in English and Spanish essentially calls on black and Latino voters to turn against Democrats because the party encourages high abortion rates in those communities. “The [Democratic] message I hear? To make our lives better, abort our future,” a female narrator says in a spot airing on radio stations with large black audiences. “Democrats ask for our votes every election. But why do we vote for a party that wants our votes but not our babies?” The ad contrasts sharply with a sly television ad Walker’s campaign dropped on Monday, in which Walker, who has called for banning all abortions (even in the case of rape and incest), implies that he supports limited abortion rights.

The PAC’s ads don’t mention Walker by name, but Tom Donelson, the head of America’s PAC, says that the goal is to help Walker’s campaign. (As a super-PAC, this group cannot directly coordinate with Walker’s reelection effort.) One spot attacks Democrats for failing to support school choice in minority communities. Another accuses unnamed absentee landlords of funneling profits from tax evasion schemes to the Democratic Party.

“Republicans have positions that for many of these people should resonate…But [minorities] don’t hear conservative messages because our side doesn’t advertise on their media,” Donelson says. “If you don’t ask for the vote, the answer is always going to be ‘no.'”

America’s PAC is heavily financed by millionaire Richard Uihlein, a major supporter of national tea party candidates. Uihlein is one of 2014’s largest political donors, and he is the owner of the Uline shipping empire. Since the 2012 election, Uihlein has given America’s PAC $1.35 million. He is also a strong supporter of Walker—and not just financially. When Democratic challenger Mary Burke claimed that when she was the state’s commerce secretary she enticed Uline to relocate its headquarters to Wisconsin, Uihlein quickly dismissed her role in the company’s decision.

Donelson says his group is trying to appeal to minority voters over the long term—a strategy that attracted Uihlein. “People like Dick [Uihlein] understand that the old rules can no longer work,” Donelson explains. “We have to build a new conservative coalition and expand it. Going into the minority communities and grab enough of that group to be part of the coalition.” (Uihlein declined to comment.) Outside of Wisconsin, America’s PAC is also running ads to support New Mexico’s Republican governor, Susana Martinez, who has led her Democratic opponent—often by double digits—for months. In Illinois, the organization is spending big on what Donelson calls the “We don’t like Dick Durbin campaign,” referring to the incumbent Democratic senator who’s looking like a lock for reelection.

In Wisconsin, though, Donelson is confident that America’s PAC will help Walker and other Republicans on the margins.

“That’s sort of ridiculous,” says Rep. Mandela Barnes, the Democratic chair of the Wisconsin Legislature’s Black and Latino Caucus. “Among the Republicans leading the state right now, there’s never been a well-thought-out plan or a guided approach for dealing with the issues facing communities of color. Whether it’s the voter ID law, or their legislation to target benefit recipients, who are disproportionately African American.

“Yes, if you mention the words ‘absentee landlord’ or ‘boarded-up building,’ that’s something that a lot of people are going to relate to…The word ‘abortion’ provokes an emotional response. But any informed voter is able to see what the Republican administration stands for.”

The abortion ad is classic America’s PAC. The group turned heads in the 2006 elections when it aired nearly $1 million in radio spots that critics derided as inflammatory and “repulsive.”

One of these ads was nearly identical to this year’s abortion spot. Another ad aimed at black voters linked Democrats who supported an end to the war in Iraq to former Ku Klux Klan leader David Duke. The ad aired after Duke spoke at an anti-war rally in Syria. “I can understand why a Ku Klux Klan cracker like David Duke makes nice with the terrorists,” says the ad’s male narrator. “What I want to know is why so many of the Democrat politicians I helped elect are on the same side of the Iraq War as David Duke?”

Yet another ad from that year that targeted black radio listeners featured two men having this exchange:

“If you make a little mistake with one of your hos, you’ll want to dispose of that problem tout suite, no questions asked.”

“Huh, really? Well maybe you do have a reason to vote Republican.”

Donelson says the group’s 2006 ads—some of which were narrated by future presidential contender Herman Cain—were the work of America’s PAC founder and longtime Republican operative Richard Nadler. “He was the political genius” behind the group, Donelson says. “Rich was a hardcore, in-your-face-guy.”

That approach sometimes landed Nadler in hot water. In 2000, two years before Nadler founded America’s PAC, he wrote a school choice ad in which two parents complained that their son’s violent school “was a bit more diversity than he could handle.” Both George W. Bush’s presidential campaign and the Republican National Committee denounced the ad, with the latter calling it “racist or race-baiting in intent,” the New York Sun reported.

Donselson says that when he took over the PAC in 2009, the year Nadler passed away, he hewed closely to Nadler’s playbook: “If there’s a difference between our ads, and we’ve toned down the language, the message is the same.”