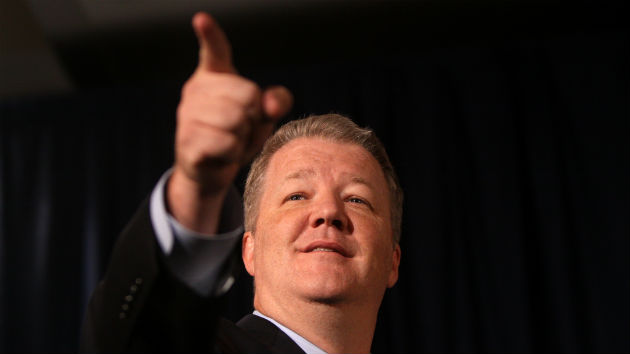 Colorado gun-rights crusader Dudley Brown has a simple political philosophy: “No compromise.” He says the NRA is spineless. (An NRA official once tagged him the “Al Sharpton of the gun movement.”) He loathes middle-of-the-road politicians. For show, he occasionally drives a Pinzgauer, a bulky Austrian-made troop transport vehicle, which he describes as his “political pain delivery vehicle.” His opponents—Democrats and Republicans alike—call him “poison” and a “political terrorist.” After Democratic lawmakers in the state passed new gun-control laws in response to the Aurora and Newtown mass shootings, Brown told NPR, “There’s a time to hunt deer. And the next election is the time to hunt Democrats.” But, as it turns out, Brown’s bid for political revenge has upped the odds that Democrats will hold on to power in the state legislature.

Brown—who is widely referred to just as “Dudley”—is the face and voice of the absolutist gun-rights movement, which opposes any and all gun-related restrictions. A frequent guest on Fox News, Brown founded an outfit called Rocky Mountain Gun Owners (RMGO); it’s Colorado’s more extreme version of the NRA. He also runs a group called the National Association for Gun Rights (NAGR), which butts heads with the NRA and is allied with Sen. Rand Paul (R-Ky.). Brown’s groups have spent millions lobbying state and federal politicians and trying to sway Republican primaries in favor of hard-line pro-gun candidates. As Brown’s organizations bolster their membership lists and war chests, they could play a key role in the 2016 Republican presidential primary contest—but perhaps at a price for the party. In Colorado, Brown’s take-no-prisoners tactics have splintered the state GOP. And this year, RMGO helped three far-right candidates win Republican state Senate primaries, which has boosted the chances for the Democrats in those races and given the Ds a good shot of retaining control of state Senate.

Born in Wyoming, Brown studied at Colorado State University and chaired the College Republicans of Colorado with the confrontational style that would become his trademark. “The College Republicans were having doughnuts with the College Democrats, even during Reagan’s re-election year,” Brown told Denver’s 5280 magazine. “I didn’t want to have doughnuts with them. I wanted to beat them over their heads.” After college, he kicked around state politics working for US Sen. Bill Armstrong, the state House’s GOP caucus, the Firearms Coalition of Colorado, and the Colorado Conservative Union. In 1996, he struck out on his own and formed Rocky Mountain Gun Owners.

“I didn’t want to have doughnuts with them,” Brown said of the College Democrats. “I wanted to beat them over their heads.”

Those were the halcyon days for Colorado Republicans. They had enjoyed almost uninterrupted majorities in the state House and Senate since the 1970s. After the 1998 elections, the GOP controlled the governorship, the legislature, both US Senate seats, and four of six congressional districts. And it was conservative Republicans who were ascendant in the state. Using RMGO, Brown took aim at GOPers who did not pass his pro-gun ideological test. In one early instance, RMGO attacked a Republican congressional candidate named Don Ament, who for Brown was insufficiently pro-gun, with a mailer showing Ament purportedly leaving a Denver strip club. The mailer declared, “Send Denver Don home to his wife.” But the state Republican Party’s office was located down the street from the strip club, and the photo of Ament was a set-up. Ament lost in the Republican primary to a far-right challenger.

After the Columbine High School shootings in 1999, Colorado voters approved a ballot measure mandating that buyers at gun shows undergo a background check first. (Columbine killers Eric Harris and Dylan Klebold had obtained their guns illegally from a straw buyer.) Bill Owens, Colorado’s newly elected Republican governor, backed the measure, putting him in Brown and RMGO’s sights. RMGO badgered Owens at public events, blitzed his office with angry mail, and bird-dogged him at public events. Sean Tonner, Owens’ deputy chief of staff, told 5280, “All Dudley wanted to do was create controversy. He makes his money when there’s turmoil, real or perceived, because that’s what gets his members to write him checks.”

But Colorado’s political landscape has shifted in the past decade. The state has attracted large numbers of young people and Hispanics, turning the state “greener and browner,” as local political consultants put it. Colorado progressives organized in the early 2000s and soon took back the legislature and the governorship. Still, gun rights (or gun safety) has remained a contentious issue, essentially a proxy battle in a changing Colorado, pitting new Coloradans against old. And Brown has capitalized on this intense fight to expand RMGO’s profile and political clout.

Brown and his allies crafted a mailer showing two men kissing; with some clever editing, they replaced the Manhattan skyline with snowy pine trees reminiscent of Colorado.

Brown’s controversial tactics have drawn national attention. In a 2012 GOP primary, conservatives sought to oust state Sen. Jean White, a Republican who had voted twice in favor of civil unions. So Brown and a right-wing group out of Virginia crafted a mailer showing two men kissing with the tagline, “State Senator Jean White’s idea of family values?” Here was the rub: The two men in the photo lived in New Jersey, and, through some clever editing, Brown’s team had replaced the Manhattan skyline with snowy pine trees reminiscent of Colorado. (The two men sued the conservative group that distributed the mailer; a judge ruled in April that RMGO had a right to use the photo under the First Amendment.) White ended up losing her primary to an RMGO-backed state representative and rancher named Randy Baumgardner.

As Brown stoked his supporters’ fears of gun-grabbing Democrats and as RMGO’s bank account grew, the group became a potent force in Republican primaries—and a headache to the state GOP. “He’s exactly what’s wrong with the Republican Party all rolled up into one guy,” Sean Duffy, a former spokesman for Bill Owens, told 5280. “He’ll say or do anything to destroy viable candidates and legislators who agree with him 90 percent of the time, because you’re either 100 percent with him, or you’re 100 percent against him.”

The mass shootings in 2012 at an Aurora, Colorado, movie theater and at Sandy Hook Elementary School in Newtown, Connecticut, did nothing to slow Brown. In an email blasted out to RMGO supporters, he sent condolences to the families of those affected and then attacked “the Washington, DC, gun control lobby”—calling it “circling vultures”—for “shamelessly using the blood of innocents to advance their anti-gun agenda.” When told that Aurora gunman James Holmes had 6,000 rounds with him the night he shot 70 people, killing 12, Brown replied: “I call 6,000 rounds running low.” His National Association of Gun Rights spent $6.7 million in 2013 lobbying against new gun-control measures in Congress—nearly twice what the NRA spent on lobbying. NAGR has gone far beyond the NRA in its gun-rights advocacy, fighting reauthorization of the Patriot Act (because it allows “unconstitutional” gun searches) and suing to overturn the ban on firearms in post offices. Sen. Rand Paul, who was endorsed by the NAGR in 2010, has signed fundraising appeals for the group.

This year, RMGO helped three far-right candidates win Republican primaries in crucial Colorado state Senate races in Jefferson County, west of Denver. These were major victories for the RINO-bashing RMGO. But the result could be good news for the Democrats. Had the more moderate Republicans won those primaries, political handicappers observed, the GOP would have had a good chance of winning those seats in the general election and regaining control of the Senate. (Democrats currently have a one-seat majority in the state’s upper chamber.) But with Brown-preferred (and die-hard) candidates on the ballot, Democrats may be able to eke out victories in these critical races. “Dudley Brown could be the Democrats’ savior this year,” says Laura Chapin, a Democratic consultant based in Denver.

While Brown’s brand of take-no-prisoners politics has earned him enemies in both political parties, among his fellow conservatives he’s a rock star. Last Wednesday, in a packed hotel ballroom, Brown introduced his old friend David Bossie, who runs the conservative group Citizens United, at the premiere of Bossie’s latest propaganda film, Rocky Mountain Heist. The film purports to tell the story of how a secret cabal of liberal donors hijacked Colorado beginning in the 2000s, and warns that this model could turn other states deep blue. Brown stars in the movie.

Afterward, I introduced myself to Brown and asked for an interview. The smile disappeared from his face. “I don’t talk to leftists like you,” he snarled. “My guys don’t read your crap.” He brushed past me, yelled “Pravda” over his shoulder, and moved into the crowd.

For more of Mother Jones’ reporting on guns in America, see all of our latest coverage here, and our award-winning special reports.