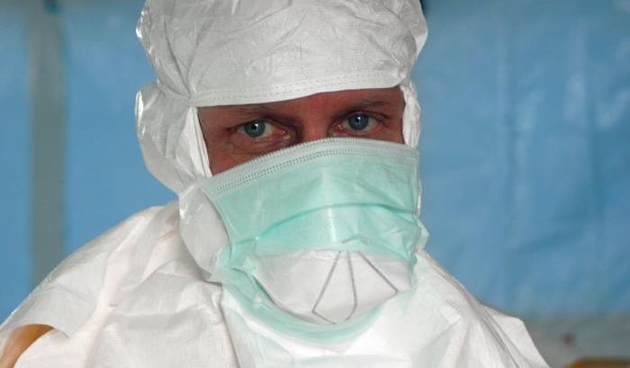 The CDC's Dr. Jordan Tappero, about to don his goggles just prior to entering the Ebola treatment unitCDC/Sally Ezra

On Tuesday, the US Centers for Disease Control and Prevention (CDC) confirmed the first case of Ebola diagnosed in the United States; the infected patient was a man who traveled from Liberia to visit family in Texas. It’s the latest development in the ever-worsening outbreak of the virus, which so far has sickened more than 6,500 people and killed more than 3,000. The United States government has pledged to send help to West Africa to help stop Ebola from spreading—but the main agencies tasked with this aid work say they’re hamstrung by budget cuts from the 2013 sequester.

On September 16, the Senate Committees on Appropriations and Health, Education, Labor, and Pensions held a hearing to discuss the resources needed to address the outbreak. Sen. Patty Murray (D-Wash.) asked NIH representative Anthony Fauci about sequestration’s effect on the efforts.

“I have to tell you honestly it’s been a significant impact on us,” said Fauci. “It has both in an acute and a chronic, insidious way eroded our ability to respond in the way that I and my colleagues would like to see us be able to respond to these emerging threats. And in my institute particularly, that’s responsible for responding on the dime to an emerging infectious disease threat, this is particularly damaging.” Sequestration required the NIH to cut its budget by 5 percent, a total of $1.55 billion in 2013. Cuts were applied across all of its programs, affecting every area of medical research.

Dr. Beth Bell, director of the CDC’s National Center for Emerging and Zoonotic Infectious Diseases, testified before the committee, making a case for increased funding. Her department, which has led the US intervention in West Africa, was hit with a $13 million budget cut as a result of the cuts in 2013. Though appropriations increased in 2014 and are projected to rise further in 2015, the agency hasn’t yet made up for the deficit—according to Bell, $100 million has already gone toward stopping the Ebola epidemic, and much more is needed. The United Nations estimates it will take over $600 million just to get the crisis under control.

Bell also argued that the epidemic could have been stopped if more had been done sooner to build global health security. International aid budgets were hit hard by the sequester, reducing global health programs by $411 million and USAID by $289 million. “If even modest investments had been made to build a public health infrastructure in West Africa previously, the current Ebola epidemic could have been detected earlier, and it could have been identified and contained,” she said during her testimony. “This Ebola epidemic shows that any vulnerability could have widespread impact if not stopped at the source.”

Still, CDC officials have pledged to do everything in their power to stop Ebola in its tracks. “The sooner the world comes together to help West Africa, the safer we all will be,” Director Tom Frieden says in a statement released in early September. “We know how to stop this outbreak. There is a window of opportunity to tamp this down—the challenge is to scale up the massive response needed.”