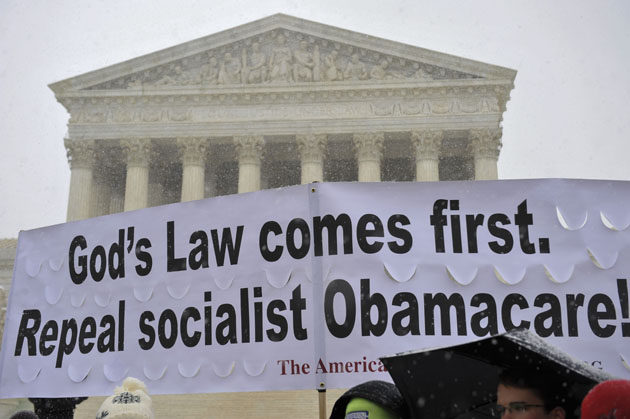 Obamacare opponents outside the Supreme Court in March, 2014 Jay Mallin/ZUMA

Update 11/7/2014: In a surprise move today, the Supreme Court agreed to hear this case.

The Supreme Court today is considering whether to hear a challenge to Obamacare that could deprive 8 million people of their newly acquired health insurance. If the court does decide to take the case, though, it will be buying into a legal argument that is frequently deployed by a different group of anti-Obama litigants—those who are trying to challenge the president’s citizenship.

The case, King v. Burwell, is one of a pair of lawsuits (the other is Halbig v. Burwell) seeking to strike a blow to the heart of the Affordable Care Act. As I explained last year:

The argument goes something like this: When Congress wrote the ACA, it said that premium subsidies would be available for certain qualifying citizens who were “enrolled through an Exchange established by the State.” (Emphasis added.) The law doesn’t say that those subsidies are available to people in the 34 states that declined to set up exchanges, where residents must utilize the now-infamously buggy Healthcare.gov, the federal exchange.

That’s where Obamacare opponents see a fatal flaw in the law. The plaintiffs in Halbig claim that they won’t be eligible for tax credits because their states didn’t start an exchange, so they won’t be able to afford insurance. As a result, they argue that they’ll be subject to the fine for not buying insurance, or to avoid the fine, they’ll have to pay a lot for insurance they don’t want. They want the court to block the IRS from implementing the law.

It’s a pretty audacious claim from a bunch of people who are, in fact, being helped quite a bit by Obamacare. One of the plaintiffs in Halbig is actually complaining about being forced to buy insurance that, with the subsidy, costs him $21 a year.

Putting those issues aside, though, the question for the Supreme Court today is whether to take up the King case. Obamacare opponents lost this case in July after it was argued before the 4th Circuit Court of Appeals in Richmond, Va. The court found that the issues raised by the plaintiffs were indeed serious, and that the statute is vague because of what is essentially a drafting error in the text. But Supreme Court precedent, the judges said, requires them to give deference to regulatory agencies’ interpretation of laws passed by Congress. Those agencies, namely the IRS, have taken the view that Congress intended for everyone to be able to access subsidies, regardless of which exchange they use to buy insurance. (Most of the law’s drafters have endorsed that argument in amicus briefs.)

The Halbig case, however, was heard by a three-judge panel from a different appellate court, in Washington, DC. That panel, which included two conservative GOP appointees, rejected the IRS’s interpretation of the law by and ruled, in a 2-1 vote, that Congress’ screw-up makes the federal health care subsidies unlawful. Generally speaking, when appellate courts disagree in similar cases like this, it’s up to the US Supreme Court to resolve the conflict, and that’s exactly what the King plaintiffs have asked the Supreme Court to do.

But not long after the decision in Halbig, the full DC Circuit set aside the panel decision and agreed to hear the case en banc—meaning that every judge on the circuit will will have a vote. The case is set to be argued in December, and many observers believe the full court, which now includes several Obama appointees, will overturn the lower court ruling and agree with the 4th Circuit that the subsidies are permissible. So technically, there is no circuit split at the moment for the high court to resolve—an argument the government has made in its briefs to the court opposing a high court review.

But the King plaintiffs are arguing that the Supreme Court should take up the case now anyway—because, well, they think it’s really, really important to stop health care reform from moving forward in case it eventually turns out to be illegal. (They’re also arguing that the original DC Circuit panel decision creates a circuit split, but plenty of lawyers disagree with them.)

Obamacare opponents are essentially arguing that the Supreme Court should take their case in order to “end all this disruption [they] have created,” says Ian Millhiser of the Center for American Progress.

In their petition to the Supreme Court, the King plaintiffs write, “Given the self-evident enormous importance of the IRS Rule to the ongoing implementation of the ACA, to the immediate economic decisions of millions of Americans and thousands of businesses, and to the currently flowing billions of dollars in expenditures that the D.C. Circuit ruled illegal, the need for this Court’s review is plainly and uniquely urgent.”

That dire language, though, bears some resemblance to the legal rhetoric frequently employed by some of the nation’s most dogged litigators: the birthers—those people who’ve spent the past six years filing lawsuits trying to prove that President Obama is not an American citizen. In years of legal filings, they’ve repeatedly begged the court to rule on Obama’s “legitimacy”—even though every lower court has rejected their claims—because, you know, if it turns out that he’s not really a citizen, that’s a problem the court should fix right away.

Since the President signs all acts passed by Congress into law, it is vitally important that the President be legitimately in power so as to give those laws domestic and international legality.

Ian Millhiser, a constitutional policy analyst at the Center for American Progress, says this sort of argument is common among not just birthers, but also tax protesters and other fringe litigants looking to kill off government programs. The Halbig and King plaintiffs, he says, are essentially saying, “Because we have created this crisis whereby filing this lawsuit we have raised the possibility that all of this disruption has happened, it is therefore imperative that you, Supreme Court, take this case to end all this disruption we have created.”

The problem with this line of argument, of course, is that it could be applied to any lawsuit, no matter how frivolous. That’s why Millhiser doesn’t think the Supreme Court is likely to take up the case, at least not until the full DC Circuit delivers its own ruling. A case doesn’t become worthy of Supreme Court review, he says, simply because the plaintiffs have cooked up a legal attack strategy that, if successful, “could lead to catastrophic consequences.” He’ll likely find out if he’s right on Monday, when the court could announce whether it’s taking the case.