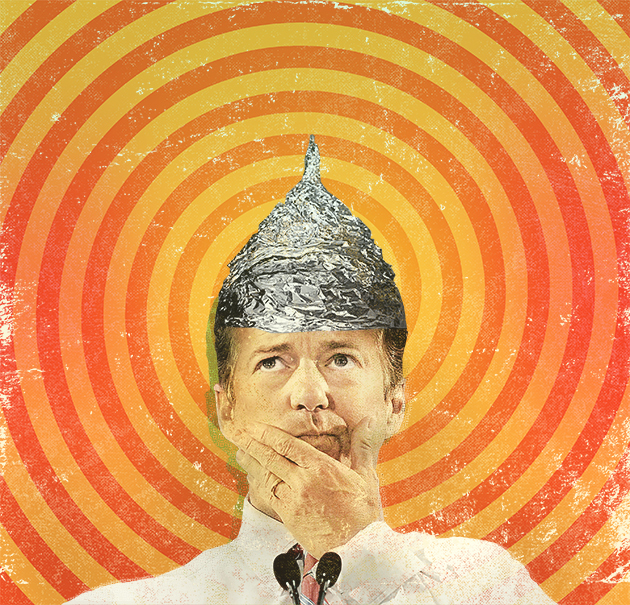 This past summer, Rand Paul, the libertarian senator from Kentucky and a potential 2016 presidential wannabe, was the GOP’s It Girl. The New York Times Magazine splashed his mug on the cover and asked, “Has the ‘Libertarian Moment’ Finally Arrived?” It noted that Paul possessed a “supple mind” and was a “preternaturally confident speaker.” Washington Post political prognosticator Chris Cillizza pronounced Paul the “most interesting voice in the GOP right now,” and Politico gave him the No. 1 spot on its list of the 50 “most important people changing American politics through the power of ideas.” When Paul, an ophthalmologist, trekked to Guatemala as part of a group of doctors providing free care to indigent patients, he was accompanied by a documentary crew, two political ad makers, and reporters from the Post and NBC News. And last week, Time magazine ran a cover story on Paul, anointing him, “The Most Interesting Man in Politics.”

Which Dad is More Embarrassing: Ron Paul or Rafael Cruz?

As this government-bashing tea partier moves toward a White House bid, journalists scrutinize his every wiggle and whisper. But one core component of his political personality has largely escaped exploration: The senator is close to being a full-blown conspiracy theorist.

In 2010, before winning his Senate seat, Paul sat for an interview with Luke Rudkowski, a libertarian YouTube personality who specializes in quizzing political leaders about the plot to establish a “one-world socialist government.”* Rudkowski asked what Paul knew of the Bilderberg Group, a collection of government and business leaders whose annual conference is a favorite target of conspiracy-mongers. Paul replied, “Only what I’ve learned from Alex Jones.” That’s right: Alex Jones, the radio host who claims that Bilderberg is a key part of a global plot to create a “scientific dictatorship” that will exterminate the “useless eaters,” a.k.a. 80 percent of the human population.

Paul described the group to Rudkowski in unequivocally Jonesian terms, as “very wealthy people, who I think manipulate and use government to their own personal advantage. They want to make it out like world government will be good for humanity. But guess what? World government is good for their pocketbook.” The previous year, Paul had appeared on Jones’ radio show, noting that he had watched his host’s videos and expressing support for the effort to “expose people who are promoting this globalist agenda.” (In turn, Jones urged his listeners to send money to Paul’s Senate campaign.)

It wasn’t until after reaching the Senate in 2011 that Paul clammed up about the Bilderbergers. In 2012, Rudkowski confronted Paul on a Washington street, challenging his endorsement of Mitt Romney, who’d attended Bilderberg sessions. The senator walked on as an aide tried to shoo Rudkowski away. When, earlier this year, the conservative Washington Free Beacon asked a top Paul aide if the senator had ever bought into the Bilderberg conspiracy theory, he jokingly dodged the question, saying Paul believes “Build a Burger would be a great name for a fast-food chain.”

Jones’ show has also been a hub of the so-called truther movement, which claims that the 9/11 attacks were mounted or permitted by the US government. During Paul’s 2010 Senate campaign, it was revealed that his campaign spokesman was a truther (as well as a death-metal musician with racist and satanic tendencies). When a Kentucky newspaper asked if Paul agreed with this view, his campaign replied that it was a “complicated situation” with “truth on both sides.”

Paul had his own conspiracy theory about 9/11. In speeches in 2008 and 2009, he warned about the influence of military contractors and zeroed in on Halliburton, the corporation that Dick Cheney headed before becoming vice president. Cheney, he noted, opposed the advance of American troops into Baghdad when he was defense secretary during the first Gulf War. Yet as veep he changed his mind because, Paul explained, the war would benefit Halliburton with a “billion-dollar no-bid contract.”

Critics have long questioned the Bush administration’s motives for invading Iraq. But Paul’s claim that a leader of his own party sacrificed American lives not for a misguided view of national security, but for naked greed—practically a charge of treason—was remarkable. After Mother Jones reported on his statements earlier this year, the senator backpedaled. When he was asked by ABC News if he really believed Cheney had been motivated by financial ties to Halliburton, Paul replied, “I’m not questioning Dick Cheney’s motives.”

Paul also has embraced one of the conspiracy theories promoted by his father, former Texas Rep. Ron Paul: that leaders from the United States, Canada, and Mexico are seeking to merge their countries into a socialist megastate that would issue the “Amero” currency to replace US and Canadian dollars and the Mexican peso. (Anti-feminist campaigner Phyllis Schlafly and Jerome Corsi, who led the 2004 Swift Boat Veterans for Truth campaign, are among the key proponents of this idea.)

At an appearance for his father’s 2008 presidential campaign in Bozeman, Montana, Rand Paul was asked what steps his dad would take to thwart the scheme to impose a North American superstate. The first thing to do, he said, was “publicizing that it’s going on” and pushing Congress to “stop it.” He insisted the Amero push was “a real thing” but cautioned, “If you talk about it like it’s a conspiracy, they’ll paint you as a nut. It’s not a conspiracy, they’re out in the open about it. I guarantee it’s one of their long-term goals—to have one sort of borderless mass continent.” He did not specify who “they” were.

Asked about these comments after entering the Senate in 2011, Paul hedged: “It’s not a matter of what I believe. It’s just a matter of whether or not there are viewpoints who believe that joining together as a North American Union” would be a good thing. But, the interviewer shot back, who’s actually calling for that? “A lot of writers,” Paul answered. “You can do an internet search.”

Before he was a senator, Paul freely swam in dark conspiratorial waters. After being elected, he shut up. So did he not believe all that stuff? Or did they get to him? Perhaps Rand Paul fears that many voters cannot handle the truth—his truths—and that the only way he can reach the White House is via, yes, a conspiracy of silence.

* Editor’s note: After this story was published, Luke Rudkowski contacted Mother Jones via Twitter to insist that even though he is described on several websites (such as this one) as a journalist who grills politicians about their plans to implement “one-world socialist government,” he has not used that particular phrase. “I said one world order before way back years ago but not socialist,” he says. He also says he is not a libertarian.