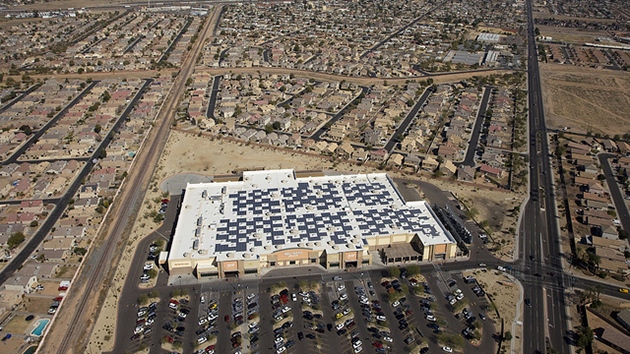 Walmart loves solar power—as long as it’s on their roof, and not yours.

That’s the takeaway from a report released today by the Institute for Local Self-Reliance, which found that between 2010 and 2013 the Walton Family Foundation has donated just under $4.5 million to groups like the American Enterprise Institute and the Heritage Foundation, which have worked to impede state-level policies that promote clean energy.

The list of groups that have received funding from the Walton Foundation reads like a who’s who of “the groups who are leading the charge against rooftop solar,” said Stacy Mitchell, who authored the report. Rob Walton, who sits on the Foundation board, is also the chair of Walmart’s board; his family are majority shareholders of Walmart and some of the richest people in America.

The funny thing is that Walmart, the world’s biggest company, is also the world’s biggest commercial solar user. Indeed, solar power is a key aspect of its much-touted green makeover. According to data released last year from the Solar Energy Industries Association, Walmart has 89 megawatts of installed solar capacity on its retail rooftops. That’s twice the capacity of second-ranked Costco and more than the total capacity of 37 individual states. Of course, those figures are less impressive when looked at in a light that better reflects the company’s mind-boggling size: Less than 3 percent of the company’s total power comes from renewables—including solar, wind, and biogas—according to EPA data.

Here’s the list of groups receiving funding from the Walton Foundation that have taken positions against state-level clean energy policies, according to the report: 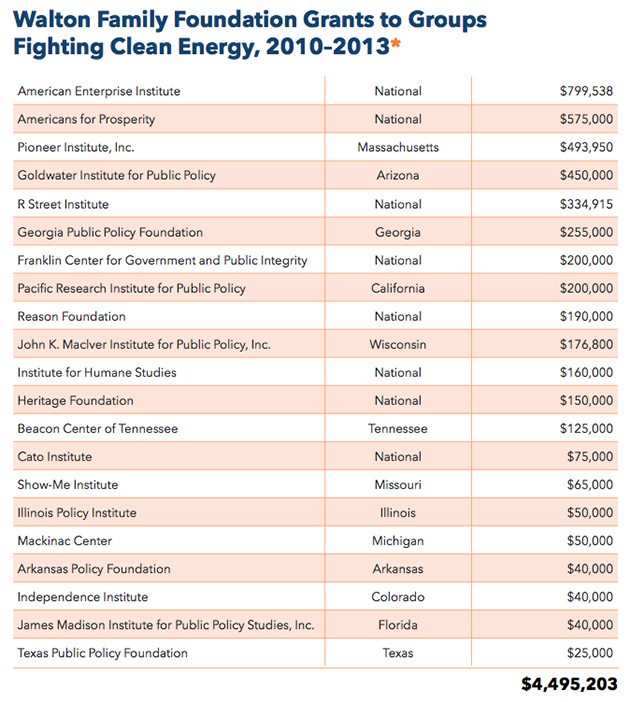 The dollar figures in the chart above come from the Walton Family Foundation’s last four annual reports. All the groups listed, Mitchell said, have opposed state-level clean energy policies like renewable portfolio standards or net-metering, both of which are key tools in helping more households go solar.

Clearly the groups listed here are involved in a host of conservative and free-market issues beyond energy, so there’s no direct evidence that the Waltons’ foundation donated to these groups because of their opposition to policies promoting renewables. Indeed, a foundation spokesperson said that the report is misleading because it ignores the foundation’s donations to environmental groups and instead “chooses to focus on a handful of grants none of which were designated for renewable energy-related issues.”

But backing groups like this has a direct impact on the growth of clean energy, Mitchell said.

The upshot, she said, is “not that their vision of the future doesn’t include some solar power. It’s just solar power they own and control.”