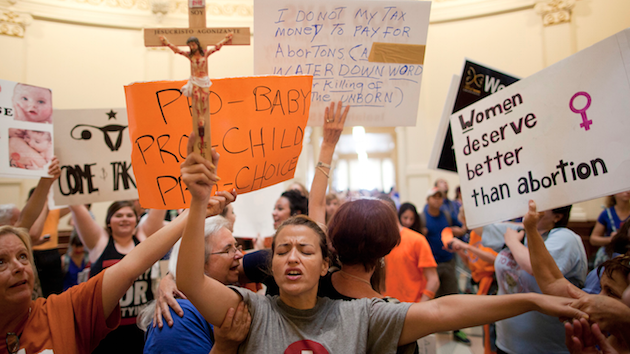 Initiatives on the ballot Tuesday in Colorado, South Dakota, and Tennessee could have outlawed legal abortion. Tennessee was the only state to approve such a measure. Here’s a rundown, updating my previous reporting on the initiatives.

Coloradans rejected personhood for the third time: The state’s ballot measure would have amended Colorado’s constitution to define a fetus as a person under Colorado’s criminal code, a change that opponents say would have made any abortion a crime, including in cases of rape and incest and when the health of the mother is endangered.

Supporters of the amendment, including Personhood Colorado, the group backing the ballot measure, insisted it had nothing to do with abortion and was designed only to ensure that anyone who harms an unborn child in any manner will be prosecuted. The woman who initially pushed for the measure was Colorado resident Heather Surovik, whose fetus was killed by a drunk driver. The driver pleaded guilty to vehicular assault and driving while intoxicated, but he was not charged with killing the fetus. (Under Colorado law, an unborn child is considered part of the mother’s body and not a separate person.)

Reproductive rights advocates said the amendment would have “give[n] legal and constitutional rights to a woman’s fertilized egg,” making criminals out of women who sought abortions and the doctors who performed them. The amendment could also have restricted access to emergency contraception and other types of birth control, as some prevent a fertilized egg from implanting in a woman’s uterus.

Planned Parenthood of Colorado spent around $3.8 million in an effort to defeat the amendment. And Sen. Mark Udall (D-Colo.) harped on the ballot initiative to help drive women to the polls. Udall’s Republican opponent, Rep. Corey Gardner (R-Colo.), said he opposed the measure but he had supported personhood measures in the past.

Coloradans defeated personhood amendments in 2008 and 2010. But because this time the measure’s language focused on “protecting pregnant women” and supporters framed it as unrelated to abortion, opponents feared it would have a better chance. They were wrong. It failed on a 63-to-37 vote.

Voters in North Dakota defeated the state’s personhood amendment: This measure asked voters to decide whether the state’s constitution should protect “the inalienable right to life of every human being at any stage of development.”

The measure would have had the effect of banning all abortion services, according to the North Dakota Coalition For Privacy in Healthcare, a group opposing the initiative. “Victims of rape and incest could be forced to carry a pregnancy that resulted from sexual violence,” the coalition noted. “Women whose health is at risk could also be prohibited from terminating their pregnancies.”

GOP state Sen. Margaret Sitte, a supporter of the personhood amendment, said it was “intended to present a direct challenge to Roe v. Wade,” the landmark Supreme Court case that held the constitutional right to privacy included a right to abortion. If the measure had passed, North Dakota would have become the first state to define life as beginning at conception.

Voters in Tennessee approved the state’s Constitutional Amendment 1: According to unofficial election results, a narrow 53 percent of voters approved Tennessee’s personhood amendment Tuesday night. As my colleague Molly Redden reported in September, the country’s biggest abortion battle this year played out in the state, where supporters and opponents of abortion rights went to battle over this constitutional amendment.

The measure states, “Nothing in this Constitution secures or protects a right to abortion or requires the funding of an abortion.” It will allow the legislature “unlimited authority to pass burdensome and unnecessary restrictions and regulations on abortion, including banning all abortions,” according to Planned Parenthood, including in the case of pregnancy from rape, or incest, or when an abortion is necessary to protect the mother’s health.

Here’s Redden with the back story:

Tennessee Republicans have been striving to put this referendum before voters since 2000, when a state Supreme Court decision blocked several harsh anti-abortion measures from becoming law. The ruling, which struck down several anti-abortion laws passed in 1998, has prevented the Legislature from passing certain strict laws enacted in other states, such as a mandatory abortion waiting period.…

Amendment 1 would overturn that court decision. ‘It will basically just open the floodgates for the General Assembly to pass any kind of restriction if the amendment passes,’ says Jeff Teague, the president of Planned Parenthood of Middle and East Tennessee. ‘We think they probably have a long list of things they’re going to pass.’

Proponents of Amendment 1 spent $1 million just in October. Opponents raised $3.4 million during that time period. Now that Tennessee’s ballot measure has passed, anti-abortion politicians in the state are expected to pass the same extreme abortion laws and regulations that have shuttered abortion clinics in Texas, Mississippi, Louisiana, Virginia, and Alabama.