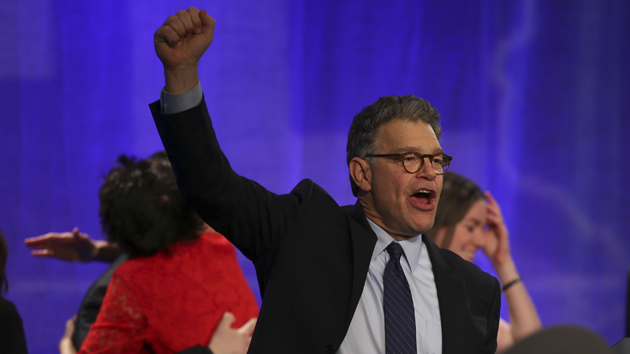 One evening a few days before the midterm elections, Sen. Al Franken stood on a low raised platform at the Democratic-Farmer-Labor Party’s St. Paul headquarters, addressing a few dozen loyal supporters. Chris Coleman, St. Paul’s mayor, had introduced the freshman senator by telling the crowd that Franken had fulfilled the legacy of the late progressive icon Paul Wellstone, whose Senate seat Franken now holds. “Thank you for saying I’ve been your Paul,” Franken replied solemnly. “There’s no higher compliment.” Then he dove into a Wellstone-esque speech selling progressive policy ideas in simple, everyman terms, spelling out exactly how he’d raise taxes on Minnesota millionaires to help students refinance their loans. “We up here believe that the economy—and not just our economy, but our community and our state—it works from the middle up,” he said. The speech exemplified how Franken campaigned—and why he won.

When Franken first ran for office, in 2008, he beat Republican incumbent Norm Coleman by a scant 312 votes—and only after a recount that delayed his Senate induction for six months. Republicans naturally saw Franken as vulnerable heading into the 2014 midterm elections. But Franken defied those expectations. He won re-election by 10 percent in a state where most voters disapprove of President Obama’s job performance. And he pulled it off by bucking the trend. Across the country, other Democratic Senate candidates distanced themselves from President Obama and the Democratic Party platform. Mark Warner, who squeaked by in Virginia, preferred to talk about how he’d tweak the Affordable Care Act than his vote for the bill, while arguing that he hasn’t actually voted with President Obama all that often. Mark Udall in Colorado decided he didn’t want to be seen with Obama. Challenger Alison Lundergan Grimes in Kentucky wouldn’t even say if she voted for Obama in 2012—after serving as one of his delegates to the national convention.

Franken took the opposite approach. Instead of running away from the progressive accomplishments of the Obama era, he embraced them, railing against bankers, advocating for student loan reform—even defending the Affordable Care Act. Franken ran as an Elizabeth Warren-style Democrat, running a populist campaign that didn’t shirk discussion of the specific policies Democrats could pursue to help the middle class. And voters rewarded him. “This wasn’t a safe seat,” Adam Green, co-founder of the Progressive Change Campaign Committee, said in an e-mail. “He earned his victory by being a proud populist Democrat for six years and inspiring voters.”

Franken’s Republican opponent, investment banker Mike McFadden, centered his campaign on painting Franken as an Obama shill. But Franken didn’t deny his ties to the president and the Democratic party—and he would have had a hard time of it if he tried. Franken was a favorite of the liberal base before entering politics thanks to his combative, unabashed left-winger radio persona on Air America and his anti-Fox News books. He joined Congress in 2009 as the Democrats’60th, filibuster-breaking vote, allowing the party to pass the Affordable Care Act. Since then he’s racked up a clear lefty record, regularly ranking among the most liberal members in the Senate.

During his reelection campaign, Franken would talk about cosponsoring bills with Republicans. But he often focused on the differences between the parties. “There’s a fundamental difference between the philosophy of the powerful and the special interest and the DFL,” Franken told the Dems in St. Paul. “We want an increased middle class. We want an increased minimum wage; they’re against it.” Franken noted that Minnesota has the second highest number of Fortune 500 companies per capita—”Only Connecticut is higher, and they’re really the size of a postage stamp.”—and attributed that to state-level progressive policies. “We all do better when all do better,” he said, reciting a favorite Wellstone line.

Franken channeled that progressive spirit in his campaign ads. In one commercial from this summer, Franken touted his contribution to the Dodd-Frank financial reform bill. “Five years ago a lot of Minnesotans lost their homes, their life savings, their jobs,” Franken says to the camera. “One of the main reasons: Wall Street banks were actually paying the credit rating agencies to give AAA ratings to financial products that were junk. The game was rigged.”

Speaking to the camera while walking through Minnesota neighborhoods was a regular shtick for Franken’s campaign. Here’s one ad that regularly aired during the final days of the campaign, with Franken highlighting a proposal to allow people to refinance their student loans:

In another ad, Franken sounded off on the injustice of tax loopholes for hedge fund managers:

“His record of accomplishing things in an environment where that’s hard to do is extraordinary,” Minneapolis Mayor Betsy Hodges told me the Friday before the election. “He’s worked across the aisle, he’s been diligent and serious, but very progressive.” I chatted with Hodges after an event at Augsburg College in Minneapolis, where she’d been the warm-up act for Portlandia star Fred Armisen, who visited Minnesota for a day to rally college kids to vote for his fellow SNL alum. It’s become a common trope for reporters to accuse Al Franken of no longer being funny, which isn’t quite right. He’s certainly toned down the rhetoric—he’s no longer calling conservatives big fat idiots, at least in public—but he still maintains a desire to make people laugh, his jokes are just cornier and more of the grandpa variety than cutting wit. “It’s not that it’s a matter of toning anything down,” Armisen told me.” Any comedian, you’ll see, when they’re doing other things, they can’t just do bits all the time.”

I caught up with Franken outside his pre-election event to ask him why he’d stood by the ACA and Dodd-Frank while other Democrats had turned tail. Standing in a parking lot, buried in a jacket to stave off the cold of the impending Minnesota winter, Franken immediately launched into a detailed, policy-laden answer, ticking off his work on changing how credit agencies are paid and listing the benefits of health care reform. “Part of it is, because Minnesota adopted the Medicaid piece, we’ve reduced by over 40 percent the percentage of Minnesotans who are uninsured,” he told me. “That’s significant. 95 percent of Minnesotans now have insurance, and that’s significant. People understand.”

The voters in Franken’s state didn’t come to that understanding in a vacuum, though. Franken pulled it off by not by toning down his goals but by channeling populist outrage at growing inequality and the hardships of the financial crash. As pundits and candidates worry about Democratic fortunes in the next election, they may want to study Franken’s rhetoric to remember how Democrats can win by actually campaigning on their party’s ideals. And perhaps Franken himself could spearhead that cause. As Esquire‘s Charlie Pierce asked last week, “Why don’t we hear Franken’s name bandied more about as a Democratic presidential possibility in 2016?”