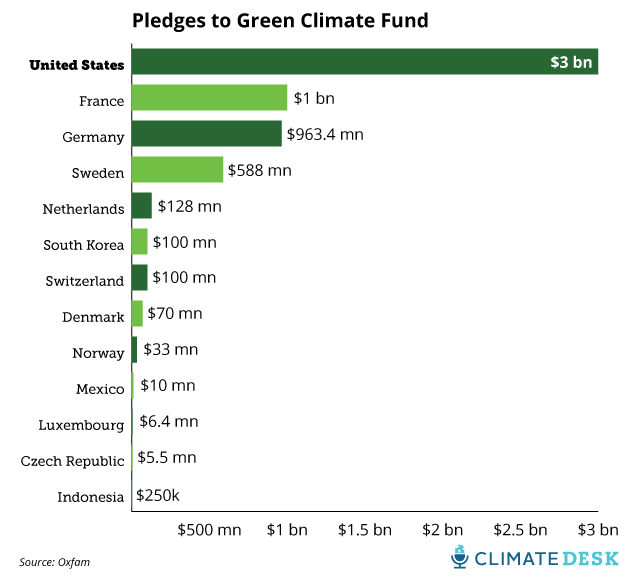 This morning, the New York Times reported that President Obama is poised to announce a pledge of $3 billion to the Green Climate Fund, a United Nations-administered account to help poor countries deal with climate change. That’s the biggest single pledge of any country so far (see chart above); it doubles the total size of the fund and is a major step toward the UN’s target of raising $15 billion before next month’s climate talks in Lima, Peru. Other notable carbon emitters, such as the UK, are expected to announce contributions by the end of next week.

But viewed in a different context, the US contribution looks much less impressive. The idea behind the fund is to reconcile one of the cruel ironies of climate change: Many of the nations that will be hit hardest by global warming—countries in Southeast Asia and the Pacific islands, for example—have done very little to cause the problem. Bangladesh was recently ranked as the country that is most vulnerable to climate change, but its per-capita carbon dioxide emissions are 44 times smaller than the US’s per-capita emissions, according to the World Bank. So the fund is meant to bridge the gap between the rich countries whose carbon pollution causing climate change and the poor countries that are suffering from it.

As the chart below shows, the US’s contribution to the Green Climate Fund looks a lot smaller when it’s adjusted to take into account America’s extremely high emissions: 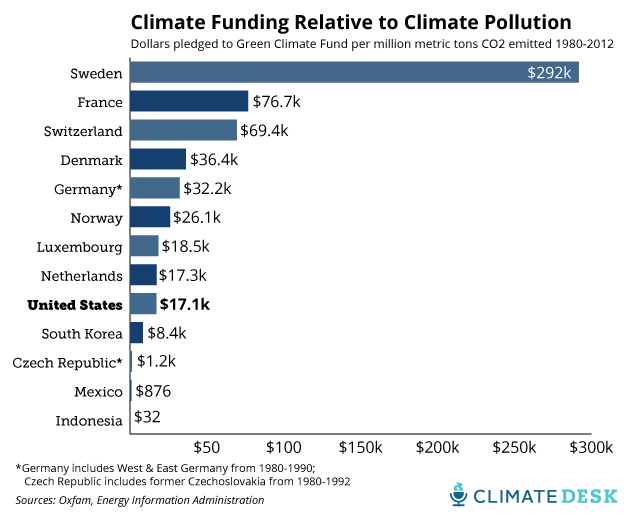 Cumulatively since 1980—the earliest year for which consistent data from the Energy Information Administration is available—the US has emitted more carbon than any other country, including China. (In 2008, China overtook the US as the leading annual carbon polluter). So it’s probably fair to say that the US is more to blame for global warming than any other single country. And yet Obama’s pledge to the Green Climate Fund only translates to about $17,100 per million metric tons of carbon dioxide emitted from 1980 to 2012—placing it ninth among the 13 countries that have announced pledges. That’s a bit like crashing a friend’s car and only offering to pay to fix the steering wheel. By contrast, Sweden’s pledge equates to $292,000 per million tons of CO2 emissions—17 times greater than the US pledge.

It’s great and necessary that Obama is willing to help poorer countries adapt to climate change. But I think it’s fair to say the US is getting away pretty cheap.