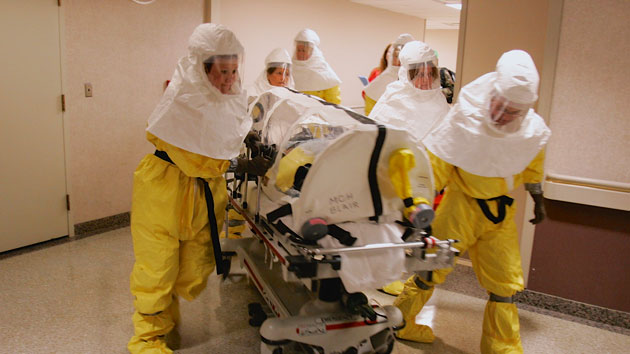 University of Nebraska Medical Center staff wheel a mock patient through the hospital's biocontainment unit during a drill in 2006.Nati Harnik/AP

Funding for the fight against Ebola could soon increase sharply. The omnibus spending bill currently being negotiated in Congress will reportedly include most of the $6.18 billion that President Barack Obama requested to help combat the disease. Most of that money would be directed toward American and international efforts at the source of the outbreak in West Africa. But in addition to the international aid, Obama’s request includes tens of millions of dollars to help hospitals in the United States prepare for the virus—money that experts say would also help protect Americans from future outbreaks of other infectious diseases.

The funding would be used to purchase protective gear for a national stockpile, expand traveler monitoring at airports, and increase testing capacity in the United States. Obama’s request also includes $166 million for equipment and training at 50 new hospital-based “Ebola treatment centers” that would be able to isolate patients and test for the disease on site.

This might seem like a lot of money, given the extremely low number of Ebola infections in the United States. Despite widespread fears, there have been only four cases of the disease in the US since the outbreak began (excluding the handful of patients who were brought to the US for treatment). But the American Hospital Association, a hospital lobby group, actually says the request is too low: In a letter to Congress last week, the group asked for an additional $500 million specifically for US hospitals.

One reason hospitals could use the extra help is that treating even a single Ebola patient is enormously expensive. Care for two patients at the Nebraska Medical Center, one of only four US hospitals equipped with biocontainment units, cost about $30,000 per day, or $1.16 million overall, according to Jeff Gold, the hospital’s chancellor. The daily cost of treating one patient, Dallas nurse Nina Pham, at a biocontainment unit at the National Institutes of Health Clinical Center in Maryland was even higher—about $50,000 per day, or $400,000 for Pham’s eight-day stay.

At a hearing in November, Gold said he was not yet sure if his Nebraska hospital would get its money back from the patients’ private insurers. He urged Congress to cover the costs, arguing that the “financial sustainability” of his and other hospitals “is critical to containing any future outbreak of an infectious disease.”

These public health improvements could help hospitals prepare for a number of diseases, says one expert. But the Ebola outbreak made them “politically possible.”

Experts say the the case of Pham and her colleague, Amber Vinson, illustrates the need for improved resources and training. The two nurses were were infected with Ebola while treating Thomas Duncan, a Liberian who contracted the disease in Monrovia before visiting family in Texas. Duncan was treated at Texas Health Presbyterian Hospital in Dallas, which had neither the right facility nor the trained staff needed to handle a contagious Ebola patient. As subsequent reports revealed, Pham and other hospital staff were forced to learn how to use the necessary protective gear only after Duncan arrived. The incident revealed some of the weaknesses in the US health care system’s approach to handling the virus.

“We underestimated the preparedness of hospitals,” says Georges Benjamin, MD, executive director of the American Public Health Association. “We made the assumption that they handle blood and body fluids all the time so this would be no different. The challenge is the volume of body fluids from this disease is enormous—that meant the protective gear needed had to be greater than before.”

Other diseases, other benefits

Advocates for increased funding argue that even if a major Ebola outbreak never occurs in the US, the money could help prepare hospitals for future diseases.

“The US health system should not respond by creating a disease silo that focuses solely on Ebola,” professors Lawrence Gostin of Georgetown University and William Foege of Emory University wrote in an opinion piece with Rep. Henry Waxman (D-Calif.), which was published last month on the website of the Journal of the American Medical Association. The trio called for “sustained and flexible enhancement” of the American public health system and lauded Obama’s request for potentially making such an improvement possible.

The Ebola treatment centers proposed in Obama’s request would be “essential” to responding to new infectious threats, “such as a rapidly moving pandemic influenza or bioterror event,” they said.

In an email, Gostin said that while these sorts of improvements are needed to prepare for a number of diseases, it was the Ebola outbreak that made them “politically possible.”

Benjamin agreed that preparing hospitals to fight Ebola would simultaneously help them get ready for other infectious diseases. Citing a “growing list” of emerging threats—including the coronaviruses and strains of influenza and bird flu—Benjamin said US hospitals need to be better prepared for other for life-threatening diseases that can spread through bodily fluids.

“At some point, we’ll get our hands around this Ebola thing and it will go away,” he said. “But what about the next one?”