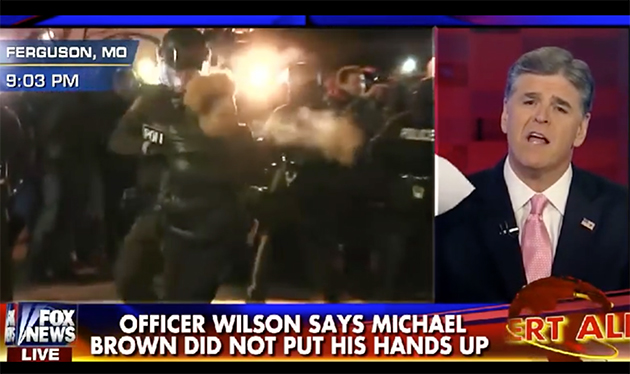 On December 8, St. Louis County Prosecutor Robert McCulloch released additional details about the grand jury documents his office made public last month after no charges were brought against Ferguson police officer Darren Wilson in the shooting death of Michael Brown. As a result, more details have come to light showing that the testimony of one particular grand jury witness was a sham—testimony that was repeatedly touted by Fox News’ Sean Hannity and other pundits who defended Wilson and the grand jury’s decision.

The Smoking Gun reported this week that after it pieced together the identity of “Witness 40” using the latest information from McCulloch’s office, 45-year-old St. Louis resident Sandra McElroy confirmed that she was indeed that witness. Her role in the grand jury proceedings had already gained notoriety in part for her journal entry recounting Wilson’s confrontation with Brown, which was submitted as evidence and included some bizarre and racially charged comments.

TSG‘s report added to a picture of inconsistencies with McElroy’s testimony, such as why she had been in Ferguson that day. (An explanation that started out as her visiting an old friend later changed to her taking “a random drive to Florisant” because she needed to “understand the Black race better.”) And while her account to investigators about the violence that occurred on August 9 hewed closely to Wilson’s version of events, during her testimony prosecutors noted that details from video footage and maps of the area didn’t jibe with her claims. Moreover, TSG dug up documents detailing McElroy’s involvement in a 2007 kidnapping case in St. Louis County, in which she gave testimony that police later determined was “a complete fabrication.”

While it’s unclear to what degree McElroy’s unreliable story influenced the grand jurors—she was one of 62 witnesses they heard from in an unusually exhaustive three-month-long process—her testimony has loomed large among pundits who’ve backed Wilson. Hannity, for example, took many opportunities to flog McElroy’s description of Brown allegedly charging at Wilson “like a football player with his head down” right before Wilson fatally shot him. In various broadcasts during the two weeks following the grand jury decision, Hannity—who mistakenly identified McElroy as black—referenced the football player description at least 21 times while trying to discredit Brown’s parents, Ferguson protestors, and others.

In a December 2 segment, responding to the notion that Brown had his hands up in surrender when Wilson shot him, Hannity said: “But didn’t the evidence show something entirely different, that you have black eyewitnesses from Ferguson that corroborated the cop’s story” and that Brown charged Wilson “like a football player with his head down.'” Other Fox News commentators, including Trace Gallagher, David Webb, and Judge Alex Ferrer, echoed that same description on other shows.

Here are two instances where Hannity references the “football player” testimony, at 2:46 and 3:26: