On November 20, minutes after President Barack Obama delivered a speech explaining his executive action on immigration reform that would protect millions of undocumented immigrants from deportation, Rep. Michele Bachmann (R-Minn.) took to Fox News and called on tea partiers everywhere to come to Washington to protest.

Bachmann, the head of the House tea party caucus who is retiring from Congress in weeks, implored the audience to help her fight the “amnesty.” She urged them to “melt the phone lines” to congressional lawmakers. And she declared she would be leading a protest on Capitol Hill. “I’m calling on your viewers to come to DC on Wednesday, December 3, at high noon on the west steps of the Capitol,” she proclaimed. “We need to have a rally, and we need to go visit our senators and visit our congressman, because nothing frightens a congressman like the whites of his constituents’ eyes…We need the viewers to come and help us.”

The next day, the Tea Party Patriots, one of the largest remaining tea party groups, sent out an urgent survey to its members. The email, signed by cofounder Jenny Beth Martin, said the group—which has worked closely with Bachmann in the past to organize other rallies at the Capitol—was trying to determine whether such a rally would be a good use of its resources. The email asked these “patriots” to indicate whether they would respond to Bachmann and come to Washington to protest the president’s actions on immigration. Apparently, the answer was no. The Tea Party Patriots did not sign up for this ride.

With the tea party not heeding Bachmann’s call, her “high noon” rally was downgraded to…a press conference. So on Wednesday, Bachmann appeared on the Capitol steps—joined by Sen. Ted Cruz (R-Texas) and Rep. Steve King (R-Iowa)—and spoke to a passel of cameras and about 40 protesters. Here’s a picture of the crowd: 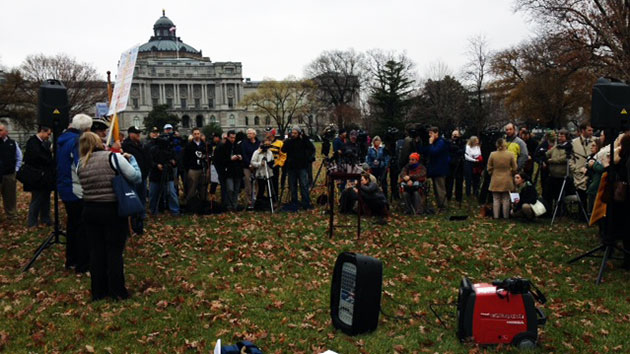 What happened to her big protest? Bachmann’s office did not respond to a request for comment. A TPP spokesman said in an email that the “gathering in Washington is not a Tea Party Patriots event per se, but we are fully in favor of it and have encouraged our supporters in the area to come out if they can.”

The lackluster response to Bachmann’s high-noon call is a far cry from five years ago, when the congresswoman made a similar appeal on Fox for a protest against Obamacare. She asked for tea partiers to hit Capitol Hill and tell legislators “don’t you dare take away my health care.” And the fledgling tea party movement responded enthusiastically. The Koch-backed Americans for Prosperity dispatched dozens buses full of activists—29 just from New Jersey. FreedomWorks, then headed by former House majority leader Dick Armey, organized more. Glenn Beck promoted the event. Thousands of people showed up, as did the entire GOP House leadership. The momentum generated from that rally helped the GOP in the 2010 midterm elections.

Bachmann, after a failed run for the White House, is spending her last days on the Hill writing listicles for BuzzFeed. And even before her final day as a congresswoman, Bachmann, with this non-rally, seems a has-been.