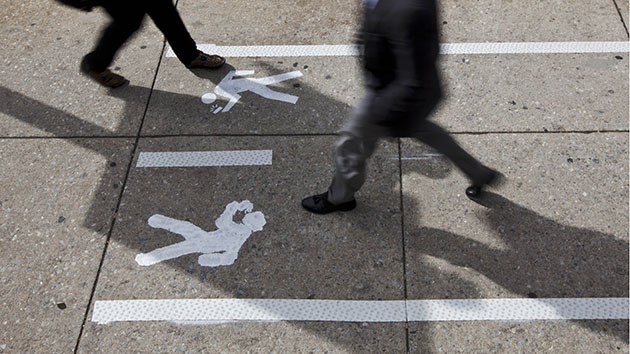 Last year, it was reported that a small city in China had created a texting-only lane for pedestrians. The story went viral before it was somewhat debunked—turns out the lane is in a theme park, and it’s just 100 feet long—but there’s a reason it got eyeballs: everybody’s worried about “texting while walking,” and no one knows what to do about it.

According to a 2012 Pew study, most grownups have bumped into stuff while looking at their phones, or been bumped by someone else on their phone. A Stony Brook University study in 2012 found that texting walkers were 61 percent more likely to veer off course than undistracted ones, a finding backed up by other researchers.

Greatest “hits” compilations abound on YouTube. One woman tumbled into a mall fountain, another off a pier. A man nearly collided with a roaming bear. While pride suffered most in those cases, more than 1,500 pedestrians landed in emergency rooms due to a cell-phone related distracted walking injury in 2010—a nearly 500 percent jump since 2005—according to a recent study from Ohio State University.

Jack Nasar, professor of urban planning at Ohio State University and one of the study’s co-authors, said the real number of injuries could be much, much higher. “Not every pedestrian who gets injured while using a cell phone goes to an emergency room,” he told Mother Jones. Some lack health insurance or (erroneously) decide their injuries aren’t serious. Others will deny a phone had anything to do with their injury. “People who die from cell-phone distraction also don’t show up in the emergency room numbers,” says Nasar.

Of course, pedestrians aren’t the only ones with their noses in their phones. According to a 2013 University of Nebraska Medical Center study, the rate of pedestrians getting hit by distracted drivers grew by about 45 percent between 2005 and 2010. The good news is that 44 states, Washington D.C., and Puerto Rico have banned texting and driving for all drivers, but the bad news is that texting and walking is potentially more dangerous and has proved harder to ban.

For one thing, local governments often define “pedestrian” quite broadly. In San Diego, anyone who chooses to “walk, sit, [or] stand in public places” is a pedestrian; so would a ban mean no more texting at the bus stop? With the endless variation in how people use their phones, and phone technology changing all the time, it’s hard for lawmakers to keep up. And for some politicians, proposed bans raise “nanny-state” hackles. Utah State Rep. Craig Frank, a Republican who opposed a ban in Utah in 2012, said at the time, “I never thought the government needed to cite me for using my cell phone in a reasonable manner.”

Statewide bans have failed in Arkansas, New York, and Nevada. Some cities have made progress; despite opposition from Frank and others, the Utah Transit Authority imposed a $50 civil fine for distracted walking near trains in 2012—including phone use—and it seems to be working. Rexburg, Idaho, has a ban on texting in crosswalks, and Fort Lee, New Jersey, added distracted walking to its finable violations under jaywalking. San Francisco and Oregon are using public awareness campaigns to get the word out. And some advocacy groups have created their own PSAs, like this highly dramatic one from AAA’s Operation Click road-safety campaign:

Melodrama aside, the video raises the obvious question: is it really that hard for pedestrians to police themselves? A July 2014 experiment by National Geographic in Washington, D.C. set up a texting-only lane at a busy DC intersection, but found that most people just ignored the markings. And there’s the rub: If walking and texting is inherently distracting, would people even notice a cell-phone-only lane, or other environmental cues? “I think there is good evidence out there that [engaging a phone after a ring or vibration] is a trained and conditioned response,” says Dr. Beth Ebel, an associate professor of pediatrics at the University of Washington. She co-authored a study in 2012 that found that people texting and walking were four times less likely to look before crossing a street, or obey traffic signals or cross at the appropriate place in the road. “This compulsive nature applies to all of us,” she says.

Maybe the answer lies in the phones. An app called Type n Walk lets you text while the phone’s camera shows you what’s in front of the phone (but doesn’t work with Apple’s iMessage). Another app in the works is Audio Aware, which interrupts your music if it hears screeching tires, a siren, or other street sounds. Then there’s CrashAlert, a proof-of-concept developed by researchers at the University of Manitoba in 2012, which would use the front-facing camera on your phone to scan for obstacles in your path (but isn’t currently in development). It’s too soon to say whether these apps will take off, or how well they’d work.

For the time being, Ebel isn’t advocating we abandon our phones—”We don’t have to go backwards. I love my phone.”—but that at the very least we have honest conversations with ourselves about our phone use and the risks we’re taking. As for critics who fly the “nanny state” banner whenever texting-and-walking bans come up, Ebel says they’re downplaying the danger. “From a law enforcement perspective, this is a form of impairment. It needs to be treated as such.”