The champagne’s been flowing since noon. You did the 12 grapes at midnight thing, danced to the requisite amount of Beyoncé, and it’s time to collapse. Car keys are off-limits, obviously, but you’ve heard all those Uber holiday pricing horror stories, and the train is bound to be a sweaty shit show. What’s more festive than weaving one’s merry way home from a New Year’s party, right?

Not so fast. It turns out New Year’s Day is the deadliest day to hoof it home, according to a 2005 study by the Insurance Institute for Highway Safety that looked at every pedestrian death from traffic collisions between 1986 and 2002. Nearly half of the fatal accidents that occurred on a January 1 took place between midnight and 6 a.m. And on an even more sobering note, 58 percent of pedestrians who died that day were legally drunk, according to their blood alcohol levels at time of death.

But maybe people have gotten way better at ambulating under the influence since 2002? I asked the IIHS to crunch the most recent data available from the National Highway Traffic Safety Administration. Turns out, not much has changed. Between 2008 and 2012, more pedestrians died in traffic crashes on New Year’s Day (and Halloween) than on other days of the year. IIHS also found that 59 percent of pedestrians killed on New Year’s Day were drunk, compared to 34 percent of pedestrians in fatal crashes every other day of the year.

There’s no mystery here: Drunk walkers are much more likely to engage in risky behavior like crossing against a sign, jaywalking, or lying down in the roadway, says Dan Gelinne, a researcher at University of North Carolina’s Highway Safety Research Center. “Intoxicated pedestrians frequently cannot fulfill the perceptual, cognitive, and physical skills required to cross safely in the complex traffic patterns seen in most urban cities,” wrote New York University School of Medicine researchers in a 2012 review paper in the journal Trauma.

Of course, NYE teetotalers still have drunk drivers to contend with. In nearly half of the traffic crashes that killed pedestrians in 2012, the driver or the walker (or both) had consumed alcohol, according to the NHTSA. But get this: Pedestrians in these crashes were more than twice as likely as drivers to have had a blood alcohol level greater or equal to 0.08 grams/deciliter, or above the legal driving limit—34 percent of walkers versus 14 percent of the drivers.

“Watching a sporting event on TV, you’re bound to see at least one ad reminding people not to drive after drinking,” says Gelinne. “The risks associated with drinking and walking aren’t as clear to the average person.” Freakonomics author Steven Levitt compared the risks of drunk driving versus drunk walking in his 2011 book SuperFreakonomics. “You find that on a per-mile basis,” he writes, “a drunk walker is eight times more likely to get killed than a drunk driver.”

If you’re lucky enough to survive the impact, healing from wounds becomes trickier when you have booze in your system. “Alcohol impairs the ability to fight infections, repair wounds, and recover from injuries,” says Elizabeth Kovacs, the Director of the Alcohol Research Program at Loyola University’s Stritch School of Medicine. Alcohol impairs the white blood cells responsible for clearing out debris and “eating garbage” on skin wounds, she says.

“Alcohol impairs the ability to fight infections, repair wounds, and recover from injuries.”

If you do miss the last train home and walking becomes unavoidable, try to remember these tips from a trauma surgeon: Don’t wear dark colors, stay out of the road as much as possible, and walk in a group (ideally with some sober folks sprinkled in).

Better street lighting and lower speed limits near popular hangouts would help too, says Gelinne, along with campaigns encouraging bartenders to cut the taps when solo customers start getting sloppy. In San Francisco, the Vision Zero campaign aims to eliminate all traffic deaths by 2024 by restructuring high-risk roadways and lowering speed limits. Los Angeles and New York have taken similar measures, thanks in part to $1.6 million in grants to promote pedestrian safety from the US Department of Transportation. IIHS’s Russ Rader points to new car technology like Subaru’s EyeSight camera system, which automatically hits the brakes if it thinks there’s a pedestrian in your path, as a good step forward, though a tiny fraction of cars are currently equipped with these features.

Bottom line: As you ring in 2015, if you can’t call a cab or squeeze onto the subway, your best option is to grab a pillow and stay put. Or reconsider your choice of merriment-enhancement for the night. As it happens, the safest day of the year to walk down the street is 4/20. Make of this what you will. 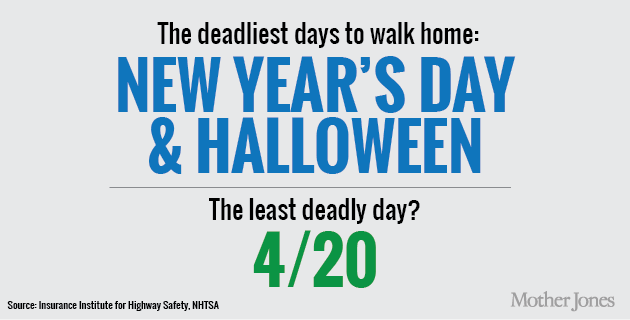 Icons by Luis Prado and Dan McCall from the Noun Project.