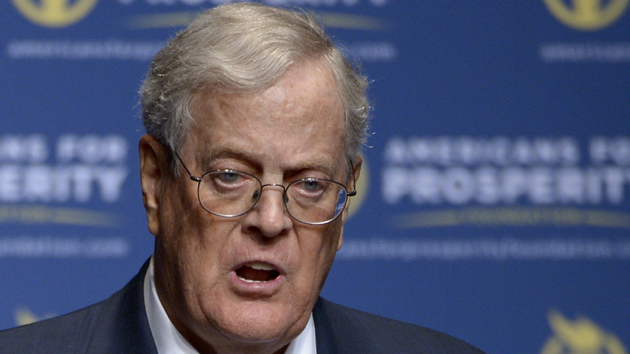 Americans for Prosperity, the free-market advocacy group established by the Koch brothers, mounts battles around the country on issues big and small via its nationwide network of chapters. Right now in North Carolina, AFP is vigorously opposing the revival of a state tax credit for renovating historic properties. The credit, which can be claimed by a company or a person, expired at the end of 2014, and the state’s Republican governor, Pat McCrory, is pushing to renew it. AFP is working hard to thwart him. But the group’s lobbying on this issue might be a tad awkward for one of its main benefactors: David Koch, who cofounded AFP and currently serves as chairman of the AFP Foundation. He used a near-identical tax credit when he renovated his historic Palm Beach villa—and saved money at local taxpayers’ expense.

Donald Bryson, the director of AFP-North Carolina, recently told the Fayetteville Observer that the restoration perk was “another one of those tax credits that complicates the tax code.” Bryson went on, “We’re all for historic preservation, we have no problems with that. But if people are going to do it, they need to do it within the private market. I don’t know why that requires a state tax credit.”

What Bryson probably didn’t know was that David Koch relied on the same type of tax credit when he spruced up Villa el Sarmiento, his 25,000-square-foot historic oceanfront mansion on Palm Beach’s swanky South Ocean Boulevard, a decade ago.

In January 2002, the Palm Beach Post reported that Koch’s waterfront mansion received one of six tax breaks approved by the town council under Florida’s historic restoration tax credit. At the time, Koch was planning a $12 million remodeling of Villa el Sarmiento, a Mediterranean-revival-style structure built in 1923 and designed by famed architect Addison Mizner. Koch’s tax break was expected to cost the city $48,000.

Asked about David Koch’s 2002 tax deal and his group’s opposition to North Carolina’s housing restoration credit, Bryson said the current debate is “a different matter altogether.” He added: “The historic tax credit in North Carolina was scheduled to sunset under an agreement made by the Governor and General Assembly in 2013. AFP has consistently advocated for simplifying the tax code, including allowing this credit to sunset. However, as long as these tax credits exist, we don’t begrudge taxpayers making use of them.”

A spokesman for Americans for Prosperity’s national office pointed me to Bryson. A spokeswoman for Koch Industries, where David Koch is an executive vice president and board member, did not respond to a request for comment.