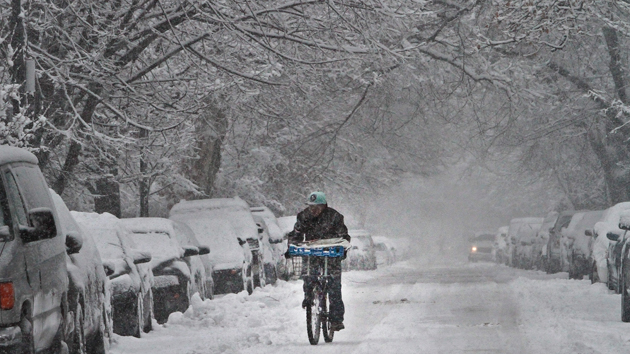 As you may have heard, a blizzard is about to destroy life as we know it on the Eastern seaboard. Your children, your children’s children, their children’s children will all learn of this snowfall in stories. If a normal snowstorm is, as the wise men used to say, “God shedding a bit of dandruff,” then what we are about to experience can only be described as, well, God shedding…a lot of dandruff? An avalanche of dandruff? One or two revelations of dandruff? We’re going to be knee-deep in God’s dandruff, is what I’m saying.

If, like mine, your fridge is bare of everything but the essentials (Tabasco, old Bloody Mary mix, a few jars of pickles) then you’re probably hoping to make it through this thing via one of two ancient ways: 1) master-cleanse or, 2) Seamless. Assuming you take the second door, the question becomes: What do you tip a delivery man during a blizzard? What is morally acceptable?

Don’t forget, NYC: if you skipped going to the store because you can just order Seamless you’re a monster who’s headed for the 9th circle <3

During really bad weather like blizzards and apocalypses, a lot of restaurants nix their delivery offerings altogether—and NYC Mayor Bill de Blasio has banned all non-emergency vehicles, including delivery bikes, after 11pm Monday night. But the ones that manage to stay open—and in this case are willing to deliver on foot well into the night—reap the benefits of constrained supply. If this were Uber, it would result in surge pricing to get more restaurants delivering. But since GrubHub and its parent company Seamless don’t do that—and they shouldn’t unless there is some way of ensuring that the increase goes to the delivery person and isn’t pocketed by the owner—we’re thrown into this sort of state of moral worry. You know in your bones that the guy who brings you pizza in sub-zero weather should get more than the guy who brings you pizza when it’s 68 degrees and sunny. But how much more?

GrubHub Seamless crunched the numbers on tips during last year’s polar vortex and found that residents in some zip codes increased their tips by as much as 24 percent, but on the whole, New Yorkers raised their normal tipping amount by a meager 5 percent. In the Midwest, however, where the temps dipped especially low, gratuities rose higher, to 14 percent in Chicago and 15 percent in Detroit and Minneapolis. Maybe the stereotypes are true and Midwesterners really are the nicest people in the country.

So, more. Tip more. How much should you tip a delivery man in a blizzard? More. More than you usually tip. Whatever you usually tip, tip better. Are you a good tipper normally? Become a great tipper. Are you an awful tipper? Become a just-bad tipper. (Also, you’re a very bad person, and no one likes you very much.)

Want a strict system? Don’t trust your heart to lead you to the right amount? New York magazine can help. Last year they spoke to Adam Eric Greenberg, a UC San Diego Ph.D. who co-authored an empirical analysis on the relationship between weather and tipping. Here’s what he told them:

When the weather is bad, be a bit more generous by tipping 20 to 22 percent. If it’s raining outside, tip 22 to 25 percent. If there’s any snow accumulation, add a dollar or two on top of what you’d tip if it were raining. Having to work as a delivery guy during a blizzard is similar to getting stuck with a party of 20 as a restaurant server, so if you hear weather forecasters promising a “polar vortex, ” a 30 percent tip is not outrageous.

So, there you have it: 30 percent. Anything under 25 percent and you go to Hell.

Update, May 4, 2015: Seamless told the Huffington Post that on January 26—the day of this article and the blizzard in question—customers in New York raised their tips by 9 percent over the yearly average, which was a paltry and pathetic 13.1 percent. So during the blizzard people tipped, (again) on average, 22.1 percent. YOU ARE GOING TO HELL.