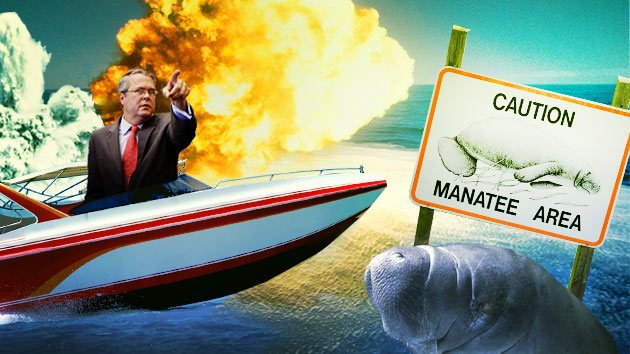 It was the summer of 2002 and Michael Bay had a problem only Jeb Bush could solve. The blockbuster director was in Miami filming Bad Boys II and plotting a high-speed boat chase through the Miami River and Biscayne Bay. Only too late did Bay realize the chase would zoom across the protected habitat of endangered manatees—the ancient, 1,500-pound sea cows that laze about many of Florida’s shallow, warm rivers and bays. The state limits boat speeds in those areas to protect the wildlife.

A boat chase at manatee speed simply wouldn’t do in a big-budget action film from the man who would later smash box office records with the Transformers series. And the manatees had friends in high places—singer Jimmy Buffett, to be precise, the cofounder of Florida’s influential Save the Manatee Club, which was adamantly opposed to the chase scene. But with much at stake for the $60 million production, Bay’s crew couldn’t afford to let a few old sea cows get in the way of filming. Bay had Will Smith and Martin Lawrence, but he needed a higher authority. He needed Bush, then the Republican governor of Florida.

Newly released emails from Bush’s gubernatorial stint reveal the likely 2016 presidential contender’s effort to help Bay in the battle of the manatees. And according to the emails, his office took steps to ensure that Bay could continue to blow stuff up in the state of Florida even as it tried to balance environmental interests with those of the film industry.

Once Columbia Pictures realized that Bay’s planned boat chase would be illegal, it petitioned the state for an emergency waiver of the speed limits in the manatee zone. Florida environmental officials promptly rejected the request, saying Columbia hadn’t provided any proof of an emergency. Buffett’s Save the Manatee Club also opposed the request.

Film producers Jerry Bruckheimer and Barry Waldman were deeply unhappy with the decision and called in Florida über-lobbyist Ron Book * to impress on the state Fish and Wildlife Conservation Commission that its decision would be “catastrophic” to the state’s economy, and particularly to Miami, where most of the film was being shot, and the city’s hotels, which were profiting handsomely. Waldman met personally with Bush to discuss the waiver. Two days later, the state approved Columbia’s request and allowed the chase scene to proceed.

Critics immediately accused Bush of caving to financial interests. One local editorial in the St. Petersburg Times suggested that Bush had personally put the ancient sea creatures in harm’s way. In response, Ken Haddad, the head of the state Fish and Wildlife Conservation Commission, took full responsibility for the decision. He told the newspaper that “there was no pressure on me to [grant the waiver]. I had no calls saying ‘Make this happen.'” Haddad pointed to protections his office required Columbia to implement, including the use of helicopter and water spotters to look out for manatees during the filming. He contended that these measures were sufficient to guarantee the manatees’ safety.

But Bush’s emails indicate that the governor definitely wanted to accommodate the filmmakers. In a July 2002 email to Denver Stutler, Bush’s chief of staff, Haddad conceded that Columbia’s “emergency” was one of its own making. He said Waldman had admitted that his production team had failed to contact the government film office in a timely fashion, and that the filmmakers hadn’t given the state fair warning of their intentions, setting up a costly crisis.

Nonetheless, in the email, Haddad sought legal assistance from the governor’s office to craft language that could plausibly define the situation as an “emergency” that would cause the sort of “severe hardship” necessary to justify a waiver of the speed rules. Haddad noted that he told the filmmakers they needed to get Buffett’s group on board with their plan to protect the manatees during filming. He also asked for Bush’s position on the issue before heading into meetings with Waldman.

Stutler forwarded the note to Bush, who responded to Stutler and other members of his cabinet, “my perspective is we should do what we can to help columbia. it would look bad if we could not get it done.” Bush expressed annoyance with the manatee advocates: “Why does the Save the Manatee Club have to sign off. [sic] Certainly they should be notified, briefed, be part of the process, etc. But sign off?”

Colleen Castille, then a chief cabinet aide to Bush who oversaw environmental affairs, bluntly replied that Save the Manatee could file suit to block the waiver and hold up the filming. While the Save the Manatee Club never signed off on the deal, it didn’t sue, either, and the filming went on as planned.

Read the Mother Jones interview with Michael Bay about movies and his critics.

Director Michael Bay says he believes the manatees were actually safer during the filming than during other times, thanks to all the spotters employed to make sure they weren’t run over by speedboats. Recalling the episode this week, Bay claims that he is a “big manatee lover” and was concerned about their welfare during the filming. He says his production team carefully complied with the state wildlife commission requirements to implement extensive precautions to protect the manatees. “We had two to three scout boats. We also had our helicopter, with one wildlife person on board, do a very thorough air scout prior to our runs” to spot manatees, he points out in an email. “We would wait up to 15 minutes for the scouts to take place. We never rushed. Animals and their safety were, and will always be, paramount when I shoot my movies.”

No manatees were harmed during the two hours of filming, though the sea mammals did hold up action several times, according to local media accounts. Patrick Rose, executive director of the Save the Manatee Club, says, “Over the course of over 40 years I’ve been working with manatee protection, there were far worse things that have happened here.” He notes there have been many instances where politics have trumped science in manatee controversies, but, he adds, “I don’t think at the end of the day this was one of those. They were trying as hard as they could to give the exemption but try to ensure the manatees would not be injured.”

Rose says that when Bush first took office, he and Buffett met with the governor to talk about manatee protection. Rose says Bush started the meeting “by telling us how much he liked manatees and how much he cared about them and how they were one of his favorite animals. He seemed very genuine.”

The boat chase wasn’t the end of Bush’s Bad Boys headaches. A few weeks later, Columbia hit the state with a last-minute request to blow up a dock in the Oleta River State Park. Bay and his crew promised to build chain-link fences in the water to keep the manatees away from the action and state environmental officials gave them the go-ahead. In an email, Castille updated Bush: “I feel comfortable that they can almost guarantee that no manatees will be hurt. Needless to say, but I will, the Save the Manatee Club is unhappy about this and want us to deny nighttime blasting. DEP/FWCC will decline [the club’s] request.”

The moviemakers were grateful for the Bush administration’s assistance with a film that would go on to be widely panned for excessive violence and misogyny but earn nearly $275 million at box offices worldwide after its 2003 release. In late August 2002, Waldman emailed Bush a note saying:

On behalf of Jerry Bruckheimer, Michael Bay, and myself, I would like to thank you for your assistance in helping to swiftly resolve our Manatee problem and allow BAD BOYS 2 to film off the waters of Watson Island in Miami Beach…

[W]e are ever grateful for the support that the City of Miami, the City of Miami Beach, the Department of Transportation, and the State of Florida have shown, and are continuing to show, our production.  Should you or your family have the opportunity to come to Miami, please accept our invitation to visit us on set; you are more than welcome, and we would enjoy having you there.

It’s unclear whether Bush took Waldman up on the offer to visit the set, but an email shows Bush’s staff confirming an on-set meeting in September that year with “Mr. and Mrs. Bruckheimer.” (Bruckheimer is one of the few big-name Republican donors in Hollywood). The email said the film’s stars Will Smith, Martin Lawrence, and Gabrielle Union would be taking a lunch break around the same time and were hoping to meet the governor.

Bush’s spokeswoman, Kristy Campbell, did not respond to questions about whether the meeting took place. A spokesman for Bruckheimer said the producer was unreachable for comment. Even so, Bush clearly liked the idea of a visit with the stars. He responded to the scheduling email with one of his characteristically terse replies: “most cool.”

Correction: The original version of this article misstated the name of Columbia’s lobbyist.