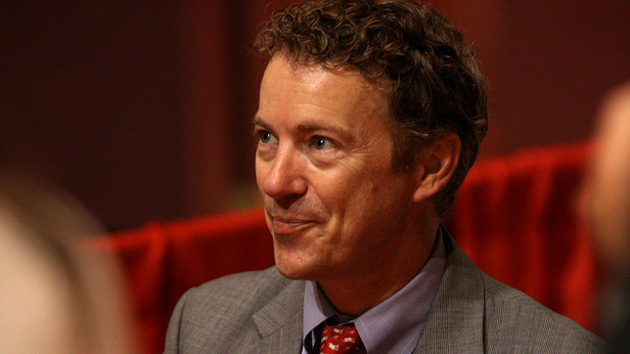 Sen. Rand Paul began the new year by lobbying for one of his favorite causes: criminal-justice reform. Last week, Paul issued a press release urging the Kentucky Legislature to act on a bill that would let state voters decide whether or not to create a path back to voting rights for nonviolent felons who have completed their sentences. “Restoring voting rights for those who have repaid their debt to society is simply the right thing to do,” Paul said in the release.

In 2014, the Democratic-controlled Kentucky House approved a bill that would put a constitutional amendment on ballots in the fall—if voters approved the measure, it would have automatically restored the voting rights of nonviolent felons who have served their time. But the Republican-controlled Senate passed a substitute that proposed several tough restrictions, including a mandatory five-year waiting period after prison before felons could reapply to vote. The two chambers couldn’t agree, and the issue has stalled. Paul, who favors the less-restrictive House bill, is trying to give the issue CPR. (His office declined to comment for this article.)

Kentucky has some of the harshest restrictions on felon voting rights in the country: Felons who wish to get their voting rights back—regardless of offense—must submit a request directly to the governor, who has the sole authority to approve or deny them. Most states offer some type of path to reenfranchisement. For example, in Washington state, all felons who have completed their sentences, probation, and/or parole are allowed to reregister to vote.

According Kentuckians for the Commonwealth, a political, social, and economic advocacy group, only three states—Florida, Iowa, and Virginia—have paths to reenfranchisement that are as difficult as Kentucky’s. In a state with roughly 3.1 million registered voters, more than 180,000 Kentucky ex-felons do not have the right to vote, and they come overwhelmingly from low-income and minority communities. Not surprisingly, studies have found that felony disenfranchisement disproportionately benefits Republicans.

This isn’t the first time that Paul has pushed to ease restrictions on felons’ voting rights. In 2013, speaking to a predominantly minority audience in Kentucky, Paul said, “I am in favor of letting [felons] get their rights back, the right to vote…Second Amendment rights, all your rights to come back.” This was not an especially popular stance within the GOP back then. A year earlier, Rick Santorum attacked Mitt Romney over his opposition to felon enfranchisement.

Stephen Voss, a state politics expert at the University of Kentucky, says he doesn’t think Paul holds enough sway in Kentucky to move reform through the statehouse. But with this issue, Paul has the chance to bolster his unorthodox approach to criminal-justice policy ahead of the 2016 primaries. “Paul is very interested in expanding the Republican coalition to include voters that have been difficult to reach in the past, but he clearly wants to do it within the bounds of small government ideology,” Voss says. “This issue of treatment of people who have served out sentences is a prime opportunity.”

Enfranchising felons may not be good for GOP electoral prospects, but Paul might not be alone among Republican 2016 contenders in the reform camp. Jeb Bush restored voting rights for over 150,000 ex-felons while governor of Florida, and Gov. Bobby Jindal signed a bill in 2008 making it easier for Louisiana felons to earn their voting rights back. “If Paul gets in trouble with Republicans, I doubt it’ll be on this issue,” Voss says. He suggests other Republicans might join Paul in what he calls a viable way of improving the GOP’s perception among minorities. “It’s not a small number of Republicans that appreciate the benefit of expanding their constituency.”