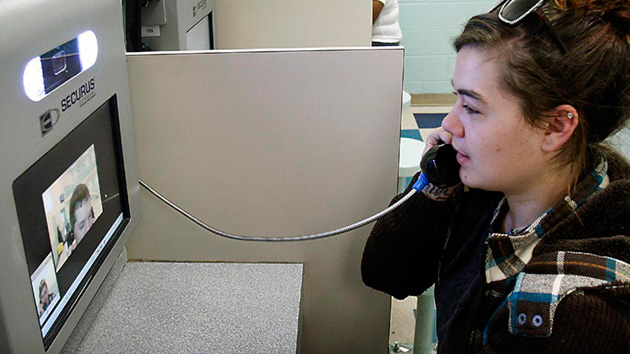 Jordan Mansfield uses a video visitation system to speak with her husband at the DeSoto County jail in Hernando, Mississippi.Stan Carroll/AP/<em>The Commercial Appeal</em>

On a chilly Sunday evening in December, a smattering of parents and small children trickled into a graffiti-covered concrete building on the grounds of the DC Jail. It was the last day to visit with prisoners before Christmas Eve, and some of the visitors were wearing Santa hats or bearing presents. The only thing missing was inmates. Three years ago, Washington, DC, eliminated in-person visitation for the roughly 1,800 residents of its jails and installed 54 video-conferencing screens in this building across the parking lot from the detention facility. The screens were installed, at no expense to taxpayers, by a Virginia-based company called Global Tel*Link (GTL), which had scored a lucrative contract for the facility’s phone service.

Now the only way families in the capital can see their loved ones in jail—many of whom have not yet been convicted of a crime and will be shipped out of state if they are—is to sit in front of a webcam for 45 minutes. (Two free weekly visits are allotted.) The video on the laptop-size screens often lags, creating an echo effect. It’s a cold, impersonal way to speak with someone a few hundred feet away. The effect, the Washington Post editorial board charged, has been “to punish prisoners and families.”

Yet video visitation is increasingly popular with correctional administrators lured by promises of lower costs, more revenue, and safer facilities. According to the Prison Policy Initiative (PPI), more than 75 counties and municipalities have replaced face-to-face jailhouse visits with video systems installed by industry giants like GTL and Securus, which are eager to squeeze money out of prisoners.

Practically everyone at prisons and jails agrees that visiting hours are a good thing. Inmates like visitation because it keeps them grounded in a high-stress environment. Administrators like it because it’s an incentive for good behavior. It’s the only way the 2.8 million children with a parent behind bars can see their dad or mom. But face-to-face visits can be expensive and time-consuming for facilities and families alike. Guards must shepherd inmates across campus to the visitation area, and some facilities don’t allow small children in. In many places, families must drive or ride the bus for hours for visits that may last as little as 20 minutes.

In theory, videoconferencing could solve these problems. Securus describes its online visitation app as a “convenient alternative to traveling to correctional facilities for on-site visitations.” HomeWAV, a Virginia-based company that offers web-based video visitation, touts an endorsement from America’s Most Wanted host John Walsh, who boasts that “frequent contact with friends and family help break the chain of recidivism”—even though the origin of this claim is a 2011 study that focused on in-person visits. 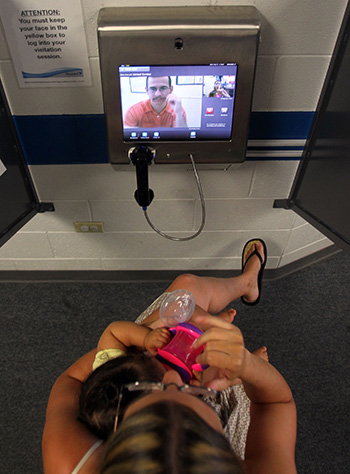 Video consoles at jails and satellite locations, such as libraries, may be reserved ahead of time and are free for visitors, with limits on the frequency and length of visits. The corrections telecommunications companies have installed many of these on-site systems at no charge to the facilities. That’s because the real money is in off-site visitation systems that let families chat with prisoners remotely via home computer, for a fee.

Take the deal Securus just inked with Sheriff Joe Arpaio of Maricopa County, Arizona, to provide video visitation at six facilities and online. A 20-minute online video chat with a Maricopa County inmate costs $5. That’s the promotional rate; it then goes up to $12.95. The company is covering the $2.3 million cost of installing the on-site video in return for receiving all the profits from remote visitation until it hits 8,000 monthly paid visits—or roughly one per inmate. After that, the sheriff’s office will take a cut of the fees—another big selling point for cash-strapped cities and counties. Jails usually get somewhere between 10 and 30 percent of the profits from remote video visits after hitting certain traffic benchmarks.

With video visitation in place, it’s easy for jails to cut back on traditional visitation. When Dallas tried to introduce video visitation last year, it assured residents that face-to-face interactions weren’t going away. Its proposed contract with Securus, however, called for just that*. In a letter to county officials, Securus acknowledged that to make up for the cost of free on-site video visits, it had to steer visitors toward remote visits, which can cost up to $1 per minute. (The county eventually approved a contract that preserved in-person visits.)

“Video has become a bigger and bigger deal in part to help replace some of the telephone revenue that’s been lost.”

Ironically, the families who stand to benefit most from remote conferencing are often the ones least able to afford it. “Families try out the service when they have the promotional rate,” says PPI’s Berna­dette Rabuy, “but when the prices go up, families are less willing to use the service.”

Making money off captive consumers is nothing new. Until recently, many of the same companies now installing videoconferencing setups reaped huge windfalls by charging prisoners and their families more than a dollar a minute to talk on the phone. In 2013, the Federal Communications Commission intervened and set an interim rate of 21 cents per minute for prepaid interstate phone calls from prisons. (All those Global Tel*Link calls with prisoner Adnan Syed in the Serial podcast cost about $500.) For now, corrections telecoms can still charge exorbitant rates and surcharges for in-state calls. But the companies stand to lose big if the FCC succeeds in capping the price of those calls—a move Securus and GTL are fighting. Video systems represent a way to keep this lucrative market open. “Video has become a bigger and bigger deal in part to help replace some of the telephone revenue that’s been lost,” says Carrie Wilkinson, prison phone justice director at the Human Rights Defense Center.

And if jails aren’t sold on the financial windfalls of video visitation, there’s also the surveillance angle. The new video systems record and monitor both inmates and their visitors. Securus says that remote visitations “create new investigative opportunities”; a company called Guarded Exchange has partnered with Securus to offer “behavior analysis” of video chats. Another company, TurnKey, boasts that corrections officers can receive real-time notifications when inmates use its program; guards can even watch and listen in on visits from a smartphone. And its archived videos are “fully admissible in court.” What’s being billed as a curb against recidivism could also keep the jails full.

*Correction: This article originally misstated the status of video visitation in Dallas.