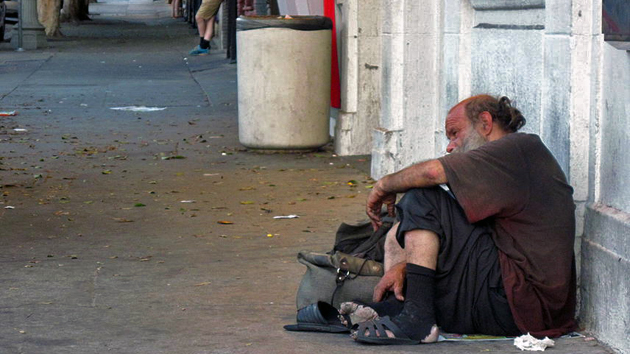 Early in the evening on January 29, hundreds of people filed into a small assembly room at the San Francisco Health Department, psyched for the night’s adventure: They were volunteers for the city’s annual “point in time” homeless count, which was taking place simultaneously in cities across the United States.

Cities are required to participate in the count, which is based on criteria provided by the Department of Housing and Urban Development. The data is used by legislators, government agencies, city officials, nonprofits—anyone who is interested, really—to evaluate strategies intended to curb homelessness. With deadlines approaching for the Obama Administration’s goal of ending chronic and veteran homelessness by the end of 2015—this year’s results would be particularly important.

The White House sent its chief of staff to rally SF’s volunteers: “It is a huge service to the country.”

The administration even dispatched officials to rally the troops—San Francisco got White House Chief of Staff Denis McDonough. “Tonight in Orlando, Tucson, Los Angeles—everybody is going out to do exactly the same thing you are,” he told the volunteers. “It is a huge service to the country because you are going to give us the data that policymakers, academics, the president, and the first lady are going to use to hold us to account.”

McDonough chose San Francisco, he said, in part because it has embraced the president’s initiatives and done a good job at reducing its chronic, child, and veteran homeless populations. It would be up to this crowd to find out how much work was still needed.

Armed with pencils and Scantron-style bubble sheets, groups of four—some driving, others on foot—would find and count people living on the streets and in city parks. (Subway stations and tunnels were left to people with more training.) Along the way, they would tally key demographic characteristics. “It can often be a bit awkward to discern someone’s gender,” Megan Owens Faught, the Human Services Agency coordinator for the count, told the volunteers. “If you are fairly certain, but not totally certain, we do encourage you to go with your gut, since you can see the person and we cannot.” 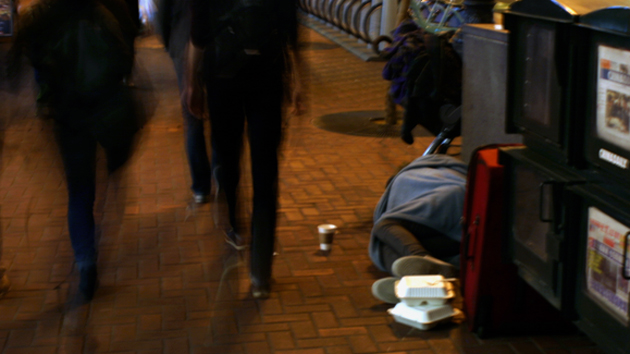 A man tries to sleep on a busy downtown street.

The count is hardly meticulous. Volunteers were given strict instructions not to speak to anyone—mostly for their own safety but also to respect people’s privacy. By observation alone, they would have to estimate the ages and genders and encampment styles of each street person they encountered. A family was any person under 18 living with someone over 18. Volunteers could peek into vehicles and guess at how many people might be in a tent, even if it were closed.

I was paired up with Noelle Simmons, a deputy director with the city’s Human Services Agency who’d volunteered several times before, and two others. We were assigned to a section of SoMa—a potentially high-population area just south of the city’s financial district. We reached our zone just after 8 p.m.

The uncharacteristic late-January heat had succumbed to a pervasive chill, and the smell of urine wafted up from the sidewalks, mixing with steam from manhole covers. Almost immediately, we came upon a man wrapped in blankets, muttering guttural sounds against his concrete bed. He was easy to count. The volunteers filled in the appropriate bubbles, and we moved on. 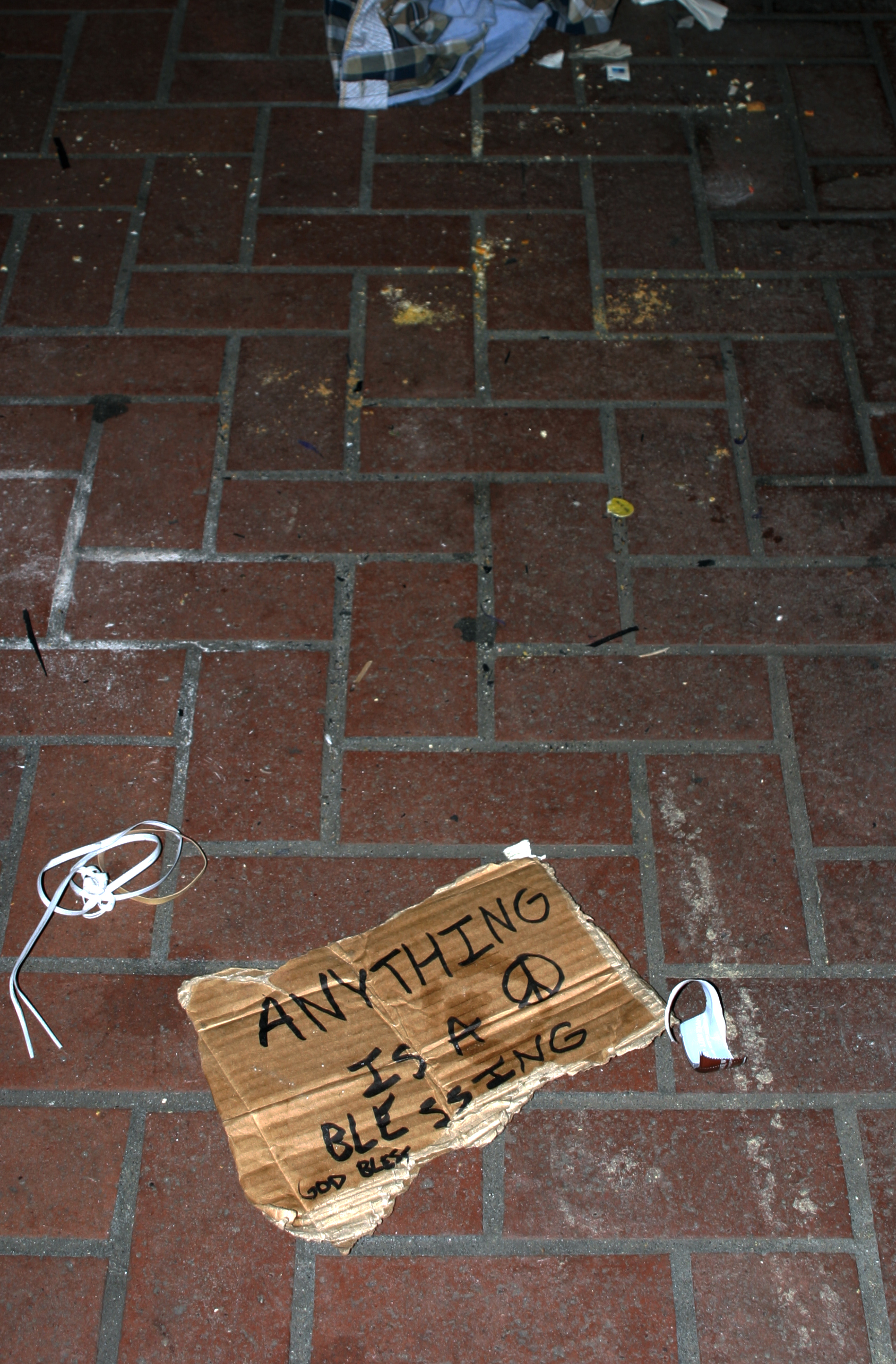 The city sounds, construction vehicles and honking horns, and the music playing from overhead windows all served as a reminder that San Francisco was still awake—as were most of its street people. Not everyone would be so easy to identify.

The next man we encountered was pushing a cart quickly and speaking unintelligibly as he made his way through our zone and toward another one. We knew he might be counted twice, but tallied him nonetheless. There were other challenges. A pair of boots protruded from a person-shaped pile of blankets. One volunteer suspected they were women’s boots, and the feet did seem small for a man’s. After some deliberation, the person was marked down as female.

Gender, we discovered, could be hard to discern even when a face was visible. One person had facial tattoos and a large hooded sweatshirt that obscured their shape. The face was expressionless, distant, and difficult to categorize.

Then there were camps where nobody was visible: The entrance of a two-person tent was agape, and we spotted a ruptured suitcase close by spewing clothes and trash. Someone had been here recently, but were they still? Or two people perhaps?

“It is very difficult for anybody to just eyeball an individual and with 100 percent certainty determine who is living on the street.”

Other times, it was the opposite problem. You’d see people gathered on street corners, maybe doing drug deals, panhandling, or hanging out. There are lots of single room occupancy units in the SoMa area, and no way to tell who had a place to return to. Volunteers often guessed based on how dirty and disheveled a person appeared.

Trying to count the homeless without engaging with them proved uncomfortable and seemed insensitive: overly judgmental on one hand and inconclusive on the other. But city officials had insisted. “I think there’s some element of art over science,” Simmons told me. “It is very difficult for anybody to just eyeball an individual and with 100 percent certainty determine who is living on the street.”

The city, she added, pairs the count with a survey of known homeless individuals, and has discussed other strategies. “We have to make an effort to get a number, and the census is the best way we have of doing it.”

Most of the people were aware they were being counted, and seemed okay with it. One man asked if we were part of the census. Others tried to get the group to interact. At one large encampment, where a dozen or so people had set up makeshift beds in an alley, a man turned on an old stereo. He danced enthusiastically, inviting us to join in. Another woman laughed, asking, “You takin’ some notes on me?” As we passed through the alley, a guy at the far end let out a cackling laugh: “Goodnight ladies and gentlemen!” he yelled after us. “Thanks for coming to the show!” 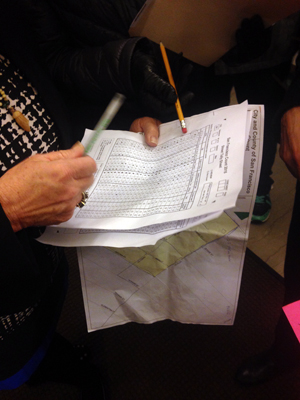 By the end of the night, our group had counted 36 people who were likely homeless. We also learned that another group had been assigned to the same area by mistake—they’d only counted 26. Simmons pointed out that the area was small. “Obviously a lot of folks we counted were sort of in transit—they were walking. They may very well have been in the survey area when we walked by them and 10 minutes later [been] out of the survey area. There’s clearly a methodological question the researchers are going to have to answer.”

Dr. Rajesh Parekh, the former director of the homeless outreach team, who has been doing the count for a decade, says the count is more about revealing trends. “No count is 100 percent accurate,” he says. “The trends have been downward and they stabilized. Even with the bad economy, the numbers didn’t drop further. To me that’s a win.”

A 10-year plan implemented in 2004 by then Mayor Gavin Newsom doubled the budget for the city’s Human Services Agency for Housing & Homeless, which as of last year was up to $102 million. It also put new emphasis on a strategy known as “housing first,” which has proved effective at drastically reducing chronic homelessness. (See “Room For Improvement,” our March/April cover story.) In those 10 years, nearly 2,700 new units were created in San Francisco, and more than 11,300 homeless were placed in housing.

City officials anticipate that this year’s numbers—which won’t be released until summer—will show that the investment is paying off. The past two counts, in 2013 and 2011, suggested a stable street population of around 3,000. “‘Housing first’ is the way to go, but you need to scale it up,” Parekh says.

Ed Lee, the city’s current mayor, also has made homelessness a priority. He announced in January that, with $25.6 million in HUD grants, he plans create an additional 500 supportive housing units, as well as a new center to connect people with services. “We will be able to bring in smallish groups [of homeless] at a time and really work intensively with them,” Simmons told me. “We have housed nearly 12,000 people, and their lives have been immeasurably improved. But there’s obviously more to do.”