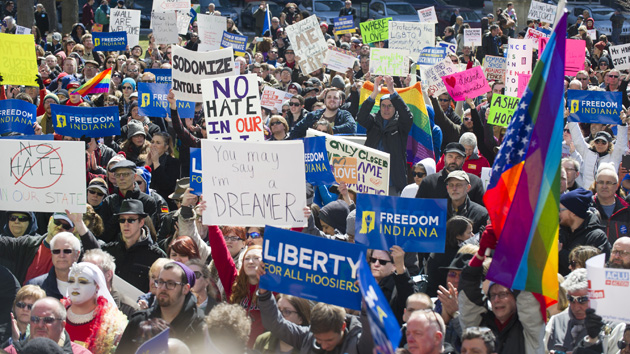 Miley Cyrus, Apple CEO Tim Cook, and former NBA star Charles Barkley are just a few of the high-profile figures condemning a law signed by Indiana Gov. Mike Pence on Thursday, which critics say will give businesses the option to discriminate against LGBT customers on religious grounds. Here’s a roundup of notable people and groups that have joined the rising backlash, including athletes, celebrities, leaders of Fortune 500 companies, and even city and state governments:

Athletes: A few days before Pence signed the Religious Freedom Restoration Act, Jason Collins, the first openly gay active player in the NBA, tweeted his opposition, asking whether he would face discrimination when he visits Indiana for the NCAA’s Final Four. Barkley, who has urged the NCAA to pull the tournament out of the state, said in a statement, “Discrimination in any form is unacceptable to me.” The NCAA has indicated the games will go on as planned, but President Mark Emmert said the league was concerned about how the law might impact student-athletes, and that it would “closely examine” how the bill “might affect future events.” In a joint statement on Saturday, the NBA, WNBA, Indiana Pacers, and Indiana Fever said they would “ensure that all fans, players and employees feel welcome.”

Corporate leaders: Salesforce chief executive Marc Benioff tweeted on Thursday that the tech giant was canceling programs that would require customers or employees to travel to Indiana. The San Francisco-based company bought the Indianapolis-based ExactTarget for $2.5 billion last year. Angie’s List is putting a campus expansion project in Indianapolis on hold, while Yelp’s chief executive Jeremy Stoppelman said it would be “unconscionable” for the company to maintain or expand “a significant business presence in any state that encouraged discrimination.” Apple’s chief executive Tim Cook wrote an op-ed for the Washington Post opposing the legislation, saying that it “rationalize[s] injustice by pretending to defend something many of us hold dear.” The chief executives of Gap and Levi’s have also since spoken out against the law in a joint statement.

Celebrities: Ashton Kutcher, Star Trek actor George Takei, Larry King, and columnist Dan Savage have all criticized the Religious Freedom Restoration Act, while Miley Cyrus went as far as calling Pence an “asshole” on Instagram. The band Wilco announced that they were canceling their May 7 show in Indianapolis because of the law, which they described as “thinly disguised legal discrimination.” Parks and Recreation actor Nick Offerman said Tuesday that he was scrapping a scheduled stop in the city as part of his 2015 summer tour.

You’re an asshole @govpenceIN ??-1 cc: the only place that has more idiots that Instagram is in politics @braisoncwukong thank you for standing up for what is right! We need more strong heterosexual men fighting for equality in both men and women! Why are the macho afraid to love muchoooo?!?

State and city governments: On Monday, Connecticut became the first state to join the boycott, with Gov. Dan Malloy signing an executive order prohibiting the use of state funds for travel to Indiana. Washington state soon followed, with Gov. Jay Inslee banning administrative trips there. San Francisco, Seattle, and Portland have made similar pledges, while Indianapolis Mayor Greg Ballard has called on Indiana’s general assembly to repeal the law or add protections for sexual orientation and gender identity.

Conventions: Gen Con, a gaming convention that brings an estimated $50 million to Indianapolis annually, has threatened to pull out of the state. “Legislation that could allow for refusal of service or discrimination against our attendees will have a direct negative impact on the state’s economy, and will factor into our decision-making on hosting the convention in the state of Indiana in future years,” chief executive Adrian Swartout wrote in a letter to Pence before the law was passed. On Monday, the American Federation of State, County and Municipal Employees announced that it was pulling its women’s conference out of Indiana due to the “un-American law” that “sets Indiana and our nation back decades in the struggle for civil rights.” The Disciples of Christ, which has been based in Indianapolis for nearly 100 years, is also weighing the option of moving its biennial convention elsewhere.