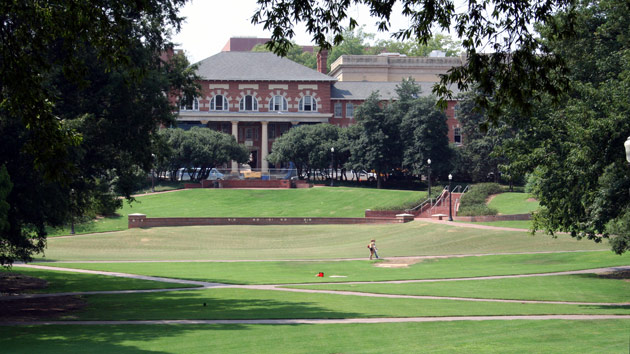 Update: The Associated Press reports that North Carolina State University will temporarily ban alcohol from social events at more than 20 fraternities. The ban would not apply to historically black Greek organizations or the Multicultural Greek Council.

Amid ire over racist activity at the Sigma Alpha Episilon chapter at Oklahoma University that led to its shut down, a pair of fraternities at North Carolina State University are under investigation this month—one for sexual assault and drug allegations, the other for its relationship to a book containing derogatory and racially charged language.

A student who had reported she was sexually assaulted at the Alpha Tau Omega frat house said she saw at least one of the fraternity’s members dealing cocaine, ecstasy and LCD at the house.

On Thursday, according to a search warrant obtained by The News & Observer, campus police seized drug paraphernalia, white powder and an orange liquid at the Alpha Tau Omega house after a student, who had also reported she was sexually assaulted at the house, said she saw at least one of the fraternity’s members dealing cocaine, ecstasy and LSD at the house. No arrests or charges have been made in connection to either the drug or sexual assault inquiries.

The fraternity was suspended two days after the student filed the sexual assault complaint with campus police. Alpha Tau Omega CEO Wynn Smily told WTVD the drug paraphernalia belonged to a pledge and that he had been kicked out of the house. “It’s devastating for the organization’s reputation,” Smiley said. “It’s very unsettling and it’s too bad this has all happened.” He went on to accuse the alleged victim in the investigation of lying.

“What she claims was happening in the chapter house was not happening. This woman’s claims to police that she saw all kind of drug activity going on in the house, we believe that to be at best wildly exaggerated and in many cases, fabricated. Her credibility throughout this whole process has been certainly in question.”

Meanwhile, the discovery of an apparent pledge book linked to the Pi Kappa Phi chapter at NC State has led to a school probe. WRAL reported that the book, found at a restaurant near campus, contained disturbing racial and sexual commentary. Some of the handwritten comments included:

“It will be short and painful, just like when I rape you.”

“If she’s hot enough, she doesn’t need a pulse.”

“That tree is so perfect for lynching.”

The chapter has been temporarily suspended as a result of the inquiry. In a statement on the fraternity’s national website, CEO Mark Timmes said it would cooperate with the school’s investigation. “The written comments and quotes reported earlier this evening are offensive and unacceptable. These statements are inconsistent with the values of Pi Kappa Phi and will not be tolerated.”

The investigations follow a string of behavioral misconduct at fraternities across the country. The Kappa Delta Rho fraternity at Penn State University was suspended for a year on Tuesday after a former member told police about two private Facebook pages in which members shared photos of nude and partially nude women, drug sales and hazing, according to a probable cause affidavit obtained by The Philadelphia Inquirer. The pages included photos of nude and partially nude women, some of whom appeared asleep or passed out. The fraternity could face criminal charges under the state’s “revenge porn” law that went into effect in September.