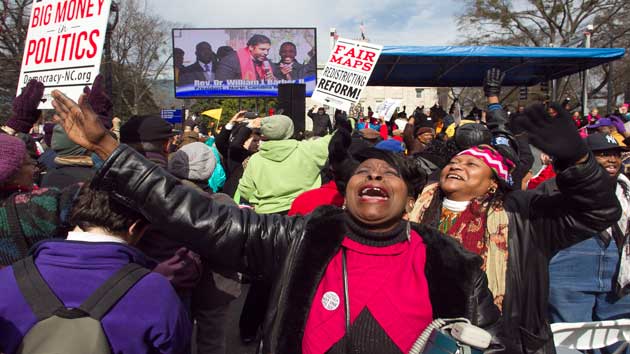 Activists, politicians, and luminaries from across the nation will flock to Selma, Alabama, this weekend to commemorate the 50th anniversary of the nonviolent voting-rights march that was undermined by police-sanctioned attacks, presaging the passage, six months later, of the Voting Rights Act of 1965. But this year’s events, which include a reenactment of the fateful march across the Edmund Pettus Bridge, are shaping up to have a more activist edge than past commemorations.

Some black leaders, such as North Carolina NAACP president Rev. Doctor William Barber II, will use the day to highlight the assault on black voting rights in the wake of a 2013 Supreme Court decision that rolled back a key provision of the Voting Rights Act. Rather than make it across the bridge, Barber and his delegation plan to turn around and march back toward Selma.

“For the last fifty years we’ve been walking across that bridge to celebrate how the civil rights leaders pushed us forward. This year, we have to turn around,” he told me. This change in routine, he says, is a response to the politicians who “will come down to Selma and give all these platitudes and talk about how they love the people of the past, but won’t ensure a Voting Rights Act that meets the test of history today.” And that “is a step backward.”

Justice Ginsburg: Getting rid of DOJ oversight is like throwing away an umbrella in a rainstorm because you are not getting wet.

Prior to the Supreme Court ruling, the VRA required nine historically racist states, including North Carolina, along with several counties, to get permission from the Department of Justice before modifying their voting laws. It paid off. In 2012, for instance, North Carolina ranked 11th out of 50 states in voter turnout, with 65 percent of registered voters casting a ballot.

But the gains, ironically enough, helped influence the court’s decision in the case of Shelby County v. Holder. Writing for the majority, Chief Justice John Roberts Jr. held that it was unconstitutional to single out just a few states for these voting requirements, especially after all this time—”nearly 50 years later,” he wrote, “things have changed dramatically.”

They can change back, too. In her dissent, Justice Ruth Bader Ginsburg likened the majority’s reasoning to throwing away an umbrella in a rainstorm because you are not getting wet.

Prescient words: Freed from DOJ oversight, several of those states quickly reversed course, enacting a deluge of new, restrictive voting laws. Within two months of the ruling, North Carolina Gov. Pat McCrory signed a package of legislation that was, for anyone who favors access to the ballot box, a nightmare: Same day registration? Gone. Pre-registration for for 16- and 17-year-olds? Also gone. A shorter early registration period? Check. Extended voting hours when voting demand exceeds the availability of voting machines? Nixed. The ability to vote in a precinct outside of where one resides? Nope. Then there’s the most contested provision: the requirement for voters to present a state-approved ID starting in 2016. Without a valid driver’s license, state ID card, US military ID, veteran card, or passport, North Carolina voters are out of luck.

“Voting should not be difficult. It should not be something that we have to jump over hurdles to do,” says Donita Judge, a senior attorney at the Advancement Project, a civil rights nonprofit. She and her colleagues promptly sued the state over the new voting restrictions on behalf of the North Carolina NAACP. A number of other groups, including the League of Women Voters and the DOJ, filed similar lawsuits; all will be heard in a joint trial this July.

“Fifty years ago, they didn’t settle in the face of death, the Klan or accepted police brutality. If they didn’t accept then, we can’t accept now.”

The lawsuit filed by the DOJ prompted sneers from Gov. McCrory: “I believe if showing a voter ID is good enough and fair enough for our own president in Illinois, then it’s good enough for the people in North Carolina.” The package, he said, is “common sense reform” aimed at curbing voter fraud and maintaining democratic integrity. Never mind that, between 2000 and 2010, there were 47,000 reported UFO sightings, but only 13 credible cases of someone trying to impersonate a voter. “It’s a red herring. It’s been proven time and time again that there is very minimal voting fraud,” Judge says. “What we do have is politicians manipulating elections—it’s more election fraud then voting fraud.”

Indeed, the sorts of restrictions North Carolina has put in place have been shown time and again to have a disproportionate impact on minority voters. The Advancement Project notes that black turnout leaped from 42 percent in 2000 to 69 percent in 2012 after same-day registration and early voting were implemented. (Granted, there wasn’t an electable black guy running in 2000.) But in 2013, Democracy North Carolina released a report showing that 34 percent of the state’s registered black voters lacked a state-issued ID—overall, 318,000 registered voters lack one, according to data from the state board of elections.