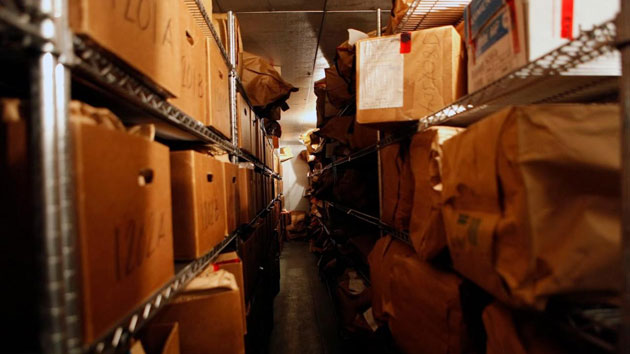 Photo courtesy of endthebacklog.org and The Joyful Heart Foundation.

Across the country, an estimated 400,000 rape kits—the DNA swabs, hair, photographs, and detailed information gathered from victims of sexual assault and used as evidence for the prosecution to convict rapists—have never been tested. Testing kits can be expensive, and in many jurisdictions, a lack of funds has resulted in kits being consigned to dusty shelves, stored in abandoned police warehouses, or stowed away in forensic labs—sometimes for years. As a result, survivors may never see their rapists prosecuted, and repeat offenders continue to commit crimes.

But now a new, $41 million Department of Justice program could finally help localities end this backlog. The money from Congress “goes a long way towards solving the problem,” says Linda Fairstein, a former sex crimes prosecutor who serves on the board of the Joyful Heart Foundation, a nonprofit established by Law and Order:SVU actress Mariska Harigtay that does research and advocacy work on the rape-kit backlog.

Last week, the Department of Justice began accepting applications from states, counties, and municipalities that want to use the federal dollars to tackle their rape kit backlogs. Officials in Baltimore, Milwaukee, Detroit, Memphis, Cleveland, and Houston tell Mother Jones that they’re planning on applying for some of the funds. “The grant shows an investment on all levels, national to local,” says Doug McGowen, a coordinator in the sexual assault response unit in Memphis, Tennessee.

Cities and communities that have received these sorts of grants in the past have had great success in tackling the problem, according to people who have been working on ending rape kit backlogs for years—prosecutors, police officers, and advocates. “If we had not received a grant, we would be struggling,” says Mary Lentschke, the assistant chief of the Houston police department. In 2011, Houston received a grant from the National Institute of Justice, a research branch of the Department of Justice that has distributed millions of dollars to cities over the past 12 years to eliminate backlogs. As of February, Houston had cleared its entire backlog of rape kits.

There are other success stories. Kym Worthy, the chief prosecutor of Wayne County, Michigan, discovered 11,341 untested rape kits in 2009 in a foreclosed police evidence warehouse. Since then, she’s secured millions of dollars from the federal government, the state of Michigan, and independent advocacy groups to test 2,000 kits as of last January. Testing in Detroit revealed 760 DNA matches in the criminal database. The Prosecutor’s Office identified 188 potential serial rapists and obtained 14 convictions across 23 states and the District of Columbia. “But we don’t have the money to follow through and prosecute,” Worthy tells me. “Testing is just the first step.” She is currently weighing the benefits of requesting funds for potential partnerships with prosecutor’s offices in Cleveland and Memphis—two other cities leading the charge on rape kit reform.

Some cities have even used their own money to tackle the problem. In 2014, Manhattan district attorney Cryus Vance Jr. announced a $35 million dollar program to help New York test and investigate all remaining rape kits in the state and then assist other cities in doing the same. New York’s program is funded by assets (mostly drug money) the city seized from convicted criminals, and New York now has no backlog of rape kits.

Now, with the new federal funding, other cities will have a chance to replicate New York, Houston, Detroit, and other cities’ success. The Milwaukee police department has repeatedly applied for these sorts of funds in the past, but never received a dime, says Carianne Yerkes, an inspector in the criminal investigation bureau. “We’re going to put a lot of effort into this one,” she promises.