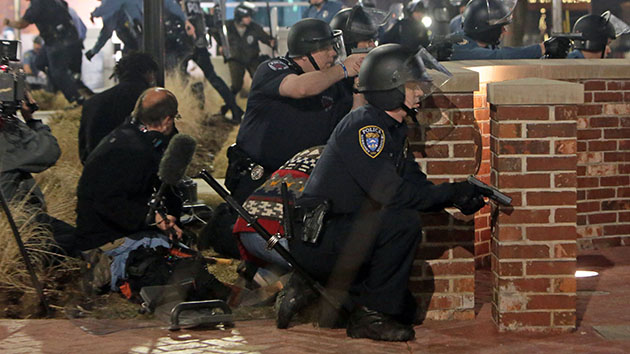 UPDATE 3, March 12, 11:41 a.m.: US Attorney General Eric Holder condemned the shooting of the two officers in Ferguson, saying the shooter was “a damn punk.”

UPDATE 2, March 12, 10:54 a.m.: Both officers have been treated and released from the hospital, according to multiple sources. Police are still searching for the gunman.

UPDATE, March 12, 10:54 a.m.: In a press conference early Thursday morning, Chief Jon Belmar briefed the media about the conditions of the two wounded officers. Watch below:

Two police officers were shot near a protest outside the Ferguson Police Department on Wednesday night, according to St. Louis police officials. In a press briefing just before 2 a.m. local time Thursday morning, St. Louis County Police Chief Jon Belmar confirmed that one officer was wounded in the shoulder, and another officer was shot in the face. Who fired the shots remains unclear. A spokesperson for the St. Louis County Police said the two officers sustained “very serious,” but non-life-threatening injuries.

Two cops were shot in #Ferguson tonight. I was standing close to them when they were shot

Jackson resigned a week after the US Department of Justice issued a scathing report about systemic race-based problems within the Ferguson, Missouri, police department and court system. This comes the day after City Manager John Shaw resigned. Both will receive a year’s salary as severance ($96,000 for Jackson, $120,000 for Shaw), and a year’s worth of health insurance—a fact that was met with outrage both in Ferguson and on social media.

Upon resigning, Chief Jackson will receive a severance pay and 1 year of health insurance. Again, not justice.

Municipal Judge Ronald J. Brockmeyer also resigned in the wake of the DOJ’s report, which accused the city administration of using police ticketing and court fines, imposed on the city’s largely African American population, as a means to raise money for the city budget. That context set the stage for violent police crackdowns in the city last August as people protested in the wake of Officer Darren Wilson shooting and killing Michael Brown. Wilson wasn’t indicted by a local grand jury, and the DOJ announced last week that it wouldn’t bring federal civil rights charges against him either. Many in the city want others to resign as well, including Knowles and the city council.

The Department of Justice issued a statement shortly after Jackson’s press conference saying that it will continue working for a court-enforceable agreement to reform the city and police department’s “unconstitutional practices in a comprehensive manner.”

Protesters gathered at the city’s police department headquarters Wednesday night after the announcement, with police arresting at least one man and some accusing the police of provoking confrontations.

Protesters shutting down the street in front of #FergusonPD #ferguson https://t.co/Am6bbk6SzU