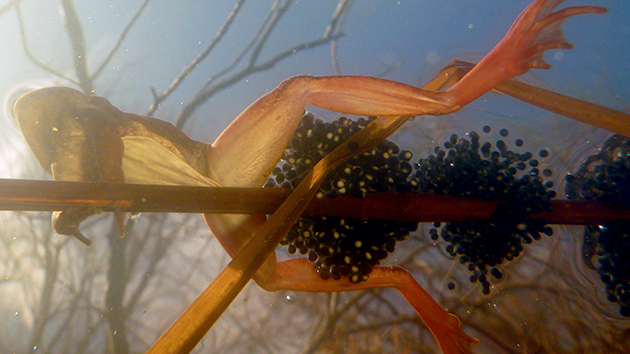 A wood frog lays eggs on a pond surface. Many frogs like this are breeding earlier in the spring because of climate change.Mark Urban

Plants and animals around the world are already suffering from the negative impacts of manmade global warming—including shrinking habitats and the spread of disease. A great number are also facing the ultimate demise—outright extinction—among them the iconic polar bear, some fish species, coral, trees… the list goes on.

While most of the research on this topic so far has been piecemeal, one species at a time, a new study out today in Science offers the most comprehensive view to date of the future of extinction. The outlook is pretty grim.

The research, conducted by evolutionary biologist Mark Urban of the University of Connecticut, analyzes 131 other scientific papers for clues about how climate change is affecting the overall rate of species extinction. The result is alarming: One out of every six species could face extinction if global warming continues on its current path. The picture is less dire if we manage to curb climate change, dropping to only 5.2 percent of species if warming is kept within the internationally-agreed upon target of 2 degrees Celsius above pre-industrial levels.

The analysis makes clear that the climate change threat isn’t necessarily a separate issue from things like habitat loss and disease; indeed, it’s often climate change that is the driving force behind those impacts. The risk appears to be spread evenly across all types of plants and animals (i.e., trees, amphibians, mammals, etc.), but is more severe in geographic ares where there are more unique species and exposure to climate impacts.

South America takes the lead, with up to 23 percent of its species threatened. One classic case study there is the golden toad, a native of mountaintop rain forests that was last seen in 1989. The toad was driven to extinction in part due to an epidemic of chytrid fungus (which is wiping out amphibians worldwide), and because climate change-related drought is destroying the forests they called home. Australia and New Zealand also ranked highly at risk, with up to 14 percent: 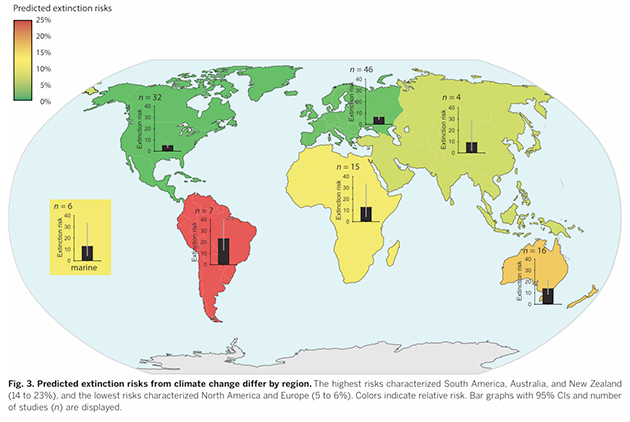 Urban’s paper offers perhaps the most comprehensive scientific companion to a terrifying narrative made popular last year in the Pulitzer Prize-winning book “The Sixth Extinction,” by Elizabeth Kolbert. The New Yorker journalist argued that when you look at the combined toll that pollution, habitat destruction, and climate change is taking on the planet’s biodiversity, humans are driving extinction on a scale only preceded in the geologic record by cataclysmic natural disasters (like the meteor that likely brought about the demise of the dinosaurs). Never before has one species been responsible for the demise of so many others. (Check out our interview with Kolbert here).

“Extinction risks are likely much smaller than the total number of species influenced by climate change,” Urban writes. “Even species not threatened directly by extinction could experience substantial changes in abundances, distributions, and species interactions, which in turn could affect ecosystems and their services to humans.”