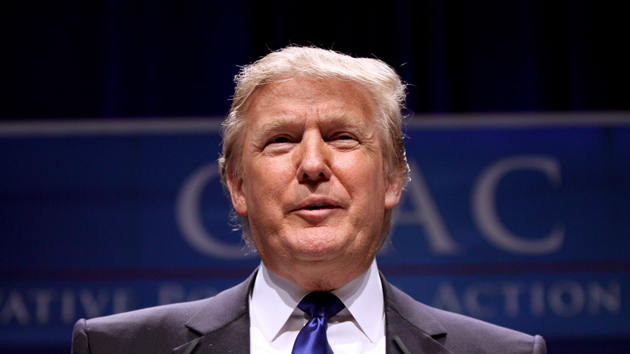 Another presidential election season has begun. So, naturally, Donald Trump is once again trolling the United States with the prospect he will run for the highest office in the land. But unlike his past presidential flirtations, Trump’s intentions this time around appear to be possibly—perhaps, maybe, conceivably—a bit more serious. That’s because the publicity-loving real estate tycoon has managed to convince one of Iowa’s most sought-after conservative operatives to join his campaign—that is, if there is a campaign.

In February, Trump announced that Chuck Laudner would be joining his “growing team” as Trump “strongly consider[s] running for president in 2016.” Trump told the Des Moines Register that Laudner was “my first choice, my second choice, and my third choice” to lead his Iowa efforts (if there are to be Iowa efforts). “I’ve liked Chuck from day one,” he said.

For Trump, there’s a lot to like about Laudner. The 49-year-old is a former chair of the state GOP and served as Rep. Steve King’s chief of staff. Laudner solidified his national reputation in 2012, when he ran Rick Santorum’s Iowa operation. Laudner drove the candidate to each of Iowa’s 99 counties in his Dodge Ram pickup that became famous (at least within Iowa) as the “Chuck Truck.” Santorum edged out Mitt Romney to win Iowa. Laudner was hailed.

So the question for political observers is not why Trump would choose Laudner, but why Laudner would choose Trump?

Conservative media buzzed when the news broke of Trump’s big get. Iowa conservative radio host Steve Deace told Breitbart, “Trump signing Laudner—who had other options—that would be an instant signal that he is serious…This is a major coup for Donald. Major coup.” One of the “other options” Laudner apparently passed up was working again with his old pal Santorum, who appears to be preparing for a 2016 bid. Laudner’s decision to join Trump is also curious on another level. After all, the thrice-married Trump is hardly the poster boy for the Christian conservative values Laudner has long promoted. Laudner did not respond to requests for comment.

After years of working for conservative causes and candidates in the Hawkeye State, Laudner has forged strong ties to a network of social conservatives who wield outsize influence in Iowa’s much-watched presidential caucus. In 2010, Laudner helped design a recall campaign targeting three Iowa State Supreme Court justices who had ruled in favor of gay marriage. A powerful coalition of religious activists came together to back the effort and, after spending nearly a million dollars, it successfully unseated the judges. Progressives argued that the result was a dangerous politicization of the state judiciary, subjecting it to the pressures of interest groups and the effects of political spending.

Jeff Link, a longtime Iowa Democratic operative, says partnering with Trump seems an unusual choice for Laudner. The billionaire has been an outspoken critic of President Barack Obama—and remains a leading birther—but his record on conservative social issues has been inconsistent at best. Trump identifies himself as a “Sunday church person,” and has recently opposed same-sex marriage and abortion, but not too long ago he was pro-choice and supported robust partner benefits for same-sex couples.

When Laudner signed on with Santorum in 2011, he declared, “I’m not looking for someone who checks the pro-life box on a survey. I want a pro-life hero who has been in the arena moving the ball.” That’s not a description that fits Trump.

One obvious speculation is that Trump attracted Laudner with his big bucks. But Craig Robinson, a top conservative journalist in Iowa, wrote in 2011 that money doesn’t concern Laudner: “There is never any sort of negotiation on salary, benefits, hours, or even a title. In fact, those are the things that turn him off.” Laudner indicates he believes Trump is the right person to galvanize the conservative vote. He told the Des Moines Register, “Someone of his stature, his fame and the size of his audience? It should be our target to convince those people that we should move the political center to the right.” He added that Team Trump operates rather smoothly: “It’s not like any other political shop I’ve ever worked in. It’s all business.”

Whatever the reason Laudner has joined forces with Trump, this move has political observers inside and outside Iowa wondering if this time the reality-show tycoon plans to do more than tease.