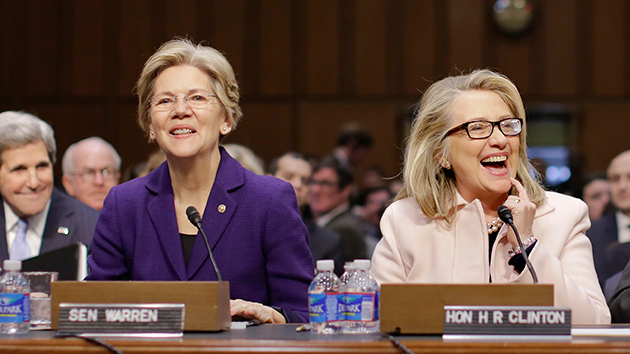 Since the official launch of her 2016 run earlier this month, Clinton has done everything she can to cozy up to Warren and publicly channel the spirit of the Massachusetts senator. Clinton has bemoaned hedge funders paying lower tax rates and called out CEOs for earning outsize paychecks. She penned a fawning blurb about Warren for Time‘s list of the world’s 100 most influential people. “Elizabeth Warren never lets us forget that the work of taming Wall Street’s irresponsible risk taking and reforming our financial system is far from finished,” Clinton wrote. “And she never hesitates to hold powerful people’s feet to the fire: bankers, lobbyists, senior government officials and, yes, even presidential aspirants.”

Beyond this broad political rhetoric, Clinton so far has been unwilling to reveal where exactly her views align with Warren’s. She launched her campaign by traveling to Iowa and New Hampshire for a “listening tour” of sorts, with detailed ideas promised to come later in the year. A spokesman for the Clinton campaign declined to say if Hillary Clinton would support a list of specific ideas proposed by Warren, such as breaking up big banks and imposing new taxes on financial transactions.

“As Hillary Clinton said last week, Elizabeth Warren is a champion of working families and scourge of special interests,” Clinton spokesman Jesse Ferguson said in a statement to Mother Jones. “The campaign is only two weeks old and we will be detailing our policy agenda after our ramp up period ends this summer but Elizabeth Warren and Hillary Clinton share a record of and a commitment to fighting for everyday Americans and their families.”

One of the many reasons that the progressive base has come to adore Warren (and has encouraged her to run for president) is that she not only rails against the excesses of Wall Street, but also forcefully offers specific ideas on how to fix the problem. Take the speech she gave last week at an economics conference in New York. Warren laid out a sweeping argument of how Depression-era reforms had been whittled away by the deregulatory zeal that started during Ronald Reagan’s presidency, carried on under Bill Clinton, and set the stage for the Wall Street meltdown that sent the economy into a tailspin in 2008. “Without some basic rules and accountability, financial markets don’t work,” Warren said. “People get ripped off, risk-taking explodes, and the markets blow up. That’s just an empirical fact.”

From there, Warren wonked out, offering a wide-ranging list of ideas about how the government could build on Dodd-Frank, the 2010 law that put new limits on Wall Street. Mother Jones sent a detailed list of these policy proposals to the Clinton campaign for comment, but it declined to weigh in on any specifics. Among Warren’s suggestions:

Warren directly called out her Republican colleagues in Congress who have voted to erase financial regulations and defund watchdog agencies. But her criticism just as easily could have been directed at the current front-runner for the Democratic nomination.

When the economy started to slip during her 2008 presidential primary campaign, Clinton proposed modest stimulus measures and plans to help homeowners facing foreclosure. But by then serving as Obama’s secretary of state, Clinton sidestepped domestic politics for four years, never having to offer an opinion on questions like whether Dodd-Frank went far enough. In January, Clinton tweeted her support for Dodd-Frank as Republicans in Congress voted to strip away some of its key rules. But she hasn’t said anything beyond the 140-character limit.

Warren has been skeptical of Clinton’s views on financial regulation for quite some time. In an appearance with Bill Moyers in 2004, Warren told a story about how, as first lady, Clinton had opposed a bankruptcy reform measure that favored the banks over consumers, only to turn around and vote for the bill when she later became a senator from New York. “She has taken money from [Wall Street] groups, and more to the point, she worries about them as a constituency,” Warren said.

Warren and Clinton met in December at Clinton’s house in Washington, DC. Clinton reportedly asked for Warren’s advice but not her endorsement. Earlier this week, the New York Times ran a story filled with Clinton allies bemoaning the attention Warren receives for being a liberal hero, pointing to Clinton’s long record of championing populist causes. In the past, Clinton has taken progressive stances on income inequality, raising taxes on the wealthy, and supporting early childhood education. But Warren’s fans aren’t likely to feel fully comfortable with Clinton until she offers some specifics on the financial reform topics that have made Warren famous.