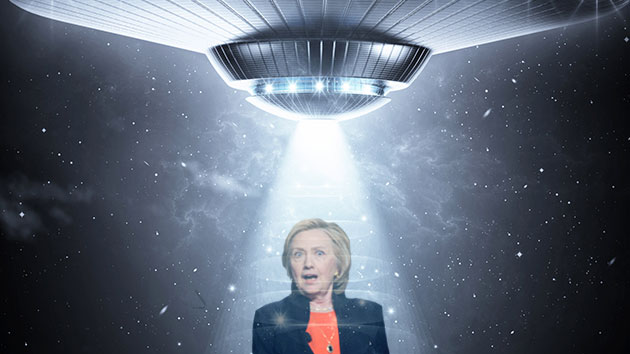 Stephen Bassett is ready for Hillary. Bassett, Capitol Hill’s only registered UFO lobbyist, anticipates that another Clinton presidency will offer another shot at what’s long been the Holy Grail for extraterrestrial enthusiasts: full disclosure of what the US government really knows about aliens. “This is the most important issue in the world,” he says.

His enthusiasm is shared by Michael Salla, an academic turned UFO researcher who maintains that aliens have been secretly involved in American politics since the Cold War. He thinks a Clinton presidency would be a good thing for the UFO community. “I think Hillary would play a positive role in getting this information out,” he says. “I think that Hillary definitely is much more the pro-disclosure candidate, where as someone like Jeb Bush is basically status quo.”

The UFO activists’ hopes for Hillary are pinned on the assumption she believes in their cause—despite having never spoken publicly about it. In particular, they are encouraged that John Podesta, Bill Clinton’s former chief of staff, will likely chair Clinton’s campaign and would likely serve in another Clinton White House. As a self-described “curious skeptic,” Podesta has openly called for greater government transparency on UFO-related matters. In his forward to UFOs: Generals, Pilots, and Government Officials Go on the Record, a 2011 book by journalist Leslie Kean, he wrote, “It’s time to find out what the truth really is that’s out there. The American people—and people around the world—want to know, and they can handle the truth.”

Podesta’s interest in extraterrestrial phenomenon is nothing new. In 1998, the Washington Post described his “fanatical devotion to ‘The X-Files’—especially FBI agent Fox Mulder, with whom he shares a penchant for obsessiveness and paranoia.” Grant Cameron, a Canadian UFO researcher, unsuccessfully tried to get the Clinton Library to release records detailing Podesta’s X-Files-themed 50th birthday party, which was apparently thrown by the first couple—who may have dressed up as the show’s main characters.

In February, as he prepared to step down as a senior adviser to President Obama, Podesta tweeted about the UFO issue:

While the tweet may have been tongue in cheek, UFO activists went nuts over it. “It was a big frickin’ deal,” says Bassett. “Someone who has been an adviser to the president of the United States, and is leaving his job, and it’s already been announced publicly that he is going to be a key adviser to the heir apparent to the White House, the de facto candidate, does not, on the day he leaves the White House, put out a tweet about UFOs. He’s inviting hundreds of articles to be written about this tweet.” Podesta did not respond to a request for comment.

The other reason that UFO enthusiasts are excited about a potential Clinton victory goes back to the X-Files era. In early 1993, Laurance S. Rockefeller began to lobby the Clinton administration to release any government information related to UFOs and extraterrestrials, including the 1947 Roswell incident. The fourth child of John D. Rockefeller Jr., Rockefeller was a successful venture capitalist, philanthropist, and conservationist. One of his lesser-known interests was UFOs. (He died in 2004.)

Over the next three years, Rockefeller and his associates corresponded and met with officials in the White House’s Office of Science and Technology Policy, according to documents released as part of a records request filed by Cameron. The effort, known as the Rockefeller Initiative, helped push the Air Force to produce what it characterized as the definitive report on Roswell. (UFO activists were not satisfied, to say the least.) The initiative  also may have helped spur a 1995 executive order that declassified millions of records, of which the vast majority were not UFO-related.

In August 1995, Rockefeller met with Hillary Clinton, and perhaps Bill, at his Wyoming ranch. In a memo, the then-director of the White House Office of Science and Technology Policy, Jack Gibbons, warned the Clintons about Rockefeller’s agenda before the visit. “[Rockefeller] will want to talk with you about his interest in extrasensory perception, paranormal phenomena, and UFO’s,” he wrote. Gibbons said he’d tried to persuade Rockefeller “not to bother you with this issue” and to focus instead on the administration’s science and technology policies. Rockefeller, he continued, “knows that we are trying to be helpful in responding to his concerns about UFO’s [sic] and human potential—and that we’re keeping an open mind about such matters—but I’ve made no secret about my conviction that we must not be too diverted from more earthly imperatives.” Gibbons could not be reached for comment. 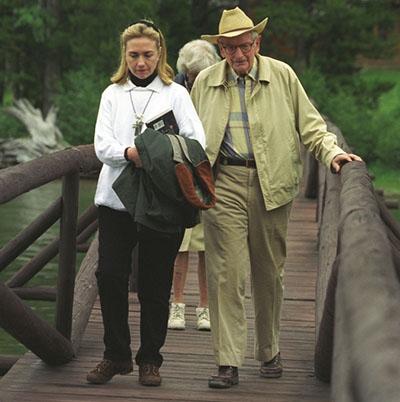 Documents from the Rockefeller Initiative posted on Bassett’s website suggest that the first lady was kept in the loop. A November 1995 letter to Gibbons from one of Rockefeller’s lawyers included a draft letter to President Clinton “which Laurance has been discussing with Mrs. Clinton and her staff.” Three months later, Rockefeller wrote Gibbons about the letter, which the White House was apparently in no hurry to receive: “It well may be that it will be timely to put this before the President late this year in order that it might receive attention in a second term. You indicated that you will keep the First Lady’s Office informed, and we shall as well.”

Bassett says the Rockefeller Initiative proves that the Clintons were interested in pursuing meaningful UFO and extraterrestrial disclosure. “You don’t go through all of this, and have this much work, just to amuse a billionaire,” he says. “If you did, you’d have to answer to that.” Bassett has been lobbying for congressional hearings on the question of UFO contact with the US government. He says that forcing the Clintons to discuss the Rockefeller Initiative is key to his strategy. “I call it the exopolitical blue dress,” he says, referring to Monica Lewinsky’s infamous blue dress and “exopolitics,” a term for the intersection of terrestrial politics and extraterrestrial beings.

Salla, who has claimed that humans are currently in touch with 17 extraterrestrial civilizations, says that Hillary Clinton’s return is another indicator that the truth is coming. He cites Jimmy Kimmel’s recent interview with President Obama, in which the president quipped that he hasn’t delved into the government’s UFO files because “the aliens won’t let it happen. You’d reveal all their secrets. They exercise strict control over us.”

Where most people heard a punch line, Salla discerned a direct link to Podesta and perhaps something deeper. “The fact that he said aliens exert strict control over us—no president has ever said that before, even as a joke,” Salla says. “Obama said things that shouldn’t just be assumed to be throwaway lines. A senior adviser a month before said he was frustrated by a lack of progress and now you have Obama on Jimmy Kimmel saying that. I think it’s worth raising the question.”

Asked for clarification of Hillary Clinton’s stance on UFO disclosure, a spokesman from her office responded via email. “Our non-campaign has a strict policy of not commenting on extraterrestrial activity,” Nick Merrill wrote. “BUT, the Truth Is Out There.”