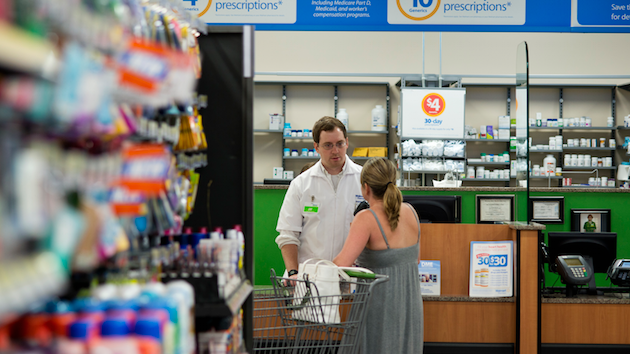 When Brittany Cartrett lost her pregnancy in March, her doctor prescribed Misoprostol to help her complete the miscarriage. The drug, which would allow her to avoid a more invasive surgical procedure, is the same one used to induce many abortions. Which is why, Cartrett suspects, two different pharmacies in central Georgia refused to fill her prescription.

Cartrett slammed one of those pharmacies, the Walmart in Milledgeville, Georgia, in a Facebook post published last week. When she asked the pharmacist why she wouldn’t fill her prescription, Cartrett claims, “She looks at me over her nose and says, ‘Because I couldn’t think of a reason why you would need that prescription.'” Cartrett says she then explained that she’d had a miscarriage, and the pharmacist replied, “I don’t feel like there is a reason why you would need it, so we refused to fill it.”

Cartrett is blaming the incident on a law, passed 15 years ago, that guarantees pharmacists the right to refuse to provide contraceptives or abortifacients on religious or conscientious grounds. Georgia is one of six states with such a law on the books. Six other states have broad “refusal clauses,” as they are known, that don’t specifically mention pharmacists but would likely protect them in the event of legal action, according to the Guttmacher Institute, a pro-abortion-rights think tank.

Walmart, however, disputes that its pharmacist refused to fill the prescription on principal. She refused, says Brian Nick, a company spokesman, because the prescription did not follow FDA guidelines.

“The customer had a specific theory as to why the drug wasn’t filled, which gets into what some call the conscience clause,” Nick told Mother Jones. “The reality at the store level is that the pharmacist had a professional judgment call against filling the prescription, not any other reason. They’re well within their rights, the pharmacists, to not agree that a specific prescription should be filled.”

The FDA allows doctors to prescribe Misoprostol “off-label” when clinical experience shows that it is safer or more effective than following published guidelines. One recent study, for instance, found that women who have had natural miscarriages can use Misoprostol vaginally, even though FDA guidelines call for it to be taken orally.

The American College of Obstetricians and Gynecologists notes that Misoprostol is safe and effective in up to 99 percent of women who use the drug to complete a miscarriage in the first trimester. (Cartrett miscarried at about 5 weeks, or early in her first trimester.) Misoprostol is only unsafe, according to ACOG, when a woman has unstable blood pressure, an allergy to the drug, or a possible ectopic pregnancy. The group urges that the drug should be as widely available as possible.

Within a few days, other women came forward with similar tales.

One Georgia woman, commenting on Cartrett’s post, described facing the exact same hurdle: “I had a similar situation happen where I miscarried at 11 weeks and needed to use Cytotec,” she wrote, referring to Misoprostol by its brand name. “The pharmacist proceeded to lecture me about how I needed to verify I wasn’t pregnant first before taking it! I was already in tears (it wasn’t my first miscarriage) and she was clueless. After explaining the situation, she said she needed to speak to my doctor personally in order to fill it. I opted for a D&C”—a surgical procedure to remove a miscarried pregnancy—”the following morning instead just to get it off my mind and over with.”

Privately, Cartrett has received many more messages from women who have had pharmacists refuse their prescriptions. One woman, Cartrett told a local news station, said she had traveled to five different pharmacies before finding one that would fill her prescription.

Planned Parenthood is pointing to Cartrett’s saga as a typical example of religious refusal laws can interfere with a woman’s health. “It’s unconscionable that Brittany Cartrett had to shop around to find a pharmacy that would give her medication to complete a miscarriage,” Cecile Richards, the Planned Parenthood president, said in a statement on Tuesday.

In her Facebook post, Cartrett herself echoed that sentiment: “I shouldn’t have to come up here and explain myself or why I need any kind of medication.”