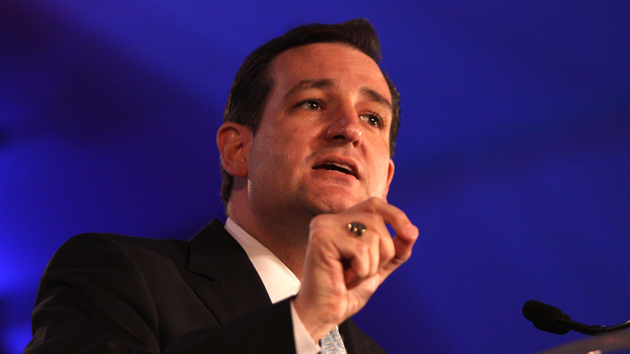 In his bio on his presidential campaign website, Sen. Ted Cruz (R-Texas) boasts of what he did as Texas solicitor general to defend the Second Amendment, the Pledge of Allegiance, and US sovereignty—all conservative causes. But Cruz does not detail another important chapter in his legal career: his work as a well-paid private attorney who helped corporations found guilty of wrongdoing.

After serving over five years as the state of Texas’ top lawyer, Cruz in 2008 joined the Houston office of the high-powered international law firm Morgan Lewis to lead its Supreme Court and national appellate practice. He stepped down as a partner in the firm after being elected a US senator in 2012. During his stint at Morgan Lewis, Cruz, who casts himself as a politician who stands on principle, handled several cases that cut against his political stances. He twice worked on cases in New Mexico to secure $50-million-plus jury awards (though, as a politician, he has called for tort reform that would prevent these sorts of awards). He assisted a lawsuit filed by a man who was wrongfully convicted of murder and nearly executed (though, as a politician, he has insisted the criminal-justice system functions just fine when it comes to capital punishment). And in one case, he filed a brief supporting President Barack Obama’s stimulus (though, as a politician, Cruz has slammed this Obama initiative).

But much of the time, Cruz represented corporate clients. He was a lawyer for Kraft in a major lawsuit against Starbucks. He represented Pfizer when a California county accused the drug manufacturer and other pharmaceutical firms of overcharging. (In a win for Big Pharma, the Supreme Court tossed out the case.) He defended Eagle Freight Systems when drivers sued the company seeking unpaid overtime wages and expenses. (Cruz lost a bid to uphold a lower court ruling that shut down the drivers’ suit. Two years later, when Cruz was no longer involved in the case, the trucking company prevailed.) In a controversial move, he represented a Pennsylvania developer who was a central player in a corruption scandal that exploited juveniles, handling a dispute this crooked developer had with his insurance company.

Cruz, a tea party favorite who calls himself a “courageous conservative,” has railed against “crony capitalism” and decried “corporate welfare.” He has boasted that he authored “legislation to end federal dollars subsidizing corporate fat cats.” Yet as a private legal gun for hire—who billed at least $695 per hour—Cruz sometimes defended corporations that engaged in sleazy practices to screw the little guy or gal. Here’s a look at two of those cases.

Tire Engineering and Distribution v. Shandong Linglong Rubber Company and Al Dobowi Ltd.: In this case, Jordan Fishman, a Florida-based businessman whose company designed and developed specialized mining tires, claimed that a former employee conspired with competitors in China and the United Arab Emirates to steal his designs and trade secrets, including his customer lists and pricing information. Fishman contended that his company lost $36 million after Shandong Linglong, a Chinese manufacturer, and Al Dobowi, a Dubai distributor, began marketing versions of his tires that were based on his stolen blueprints. A jury found in favor of Fishman’s claim and awarded him $26 million, a finding upheld by a federal judge in 2010. Fishman’s lawyers called this “one of the largest individual copyright infringement awards in US history,” and one of his attorneys, August Matteis Jr., noted, “This case should serve as a bellwether for foreign multinational corporations who believe they can act with impunity, stealing intellectual property from a small US business and then avoid the reach of our judicial system.”

But the case was not over: Shandong Linglong and Dobowi appealed to the US Court of Appeals for the 4th Circuit, claiming that the district court in Virginia that had overseen the case did not have jurisdiction over these companies and that the jury’s verdict had been wrong. The two firms contended that US copyright law did not cover their overseas actions. Cruz did not argue the case before the appeals court, but he worked on the appeals brief filed by Shandong Linglong.

His side did not triumph. In a June 2012 ruling, the appeals court noted it was not persuaded by the foreign companies’ “creative interpretation of applicable case law,” and it affirmed the jury’s award. By that time, Cruz was running for the Senate and in a hotly contested Republican primary against David Dewhurst, Texas’ lieutenant governor. Dewhurst’s campaign pounced on the case, running ads that assailed Cruz for defending a Chinese company that had plotted to wipe out an American small businessman. The ads questioned Cruz’s patriotism. (PolitiFact rated Dewhurst’s contention that Cruz had represented a Chinese company found guilty of stealing the tire blueprints “mostly true.”) In response to the Dewhurst attack, Cruz maintained that he had merely worked on the brief, and he claimed not a single American manufacturing job had been lost to China as a result of the case. That was accurate, but Fishman noted he had been forced to lay off 40 employees in sales, design, and distribution. Cruz’s work for a Chinese firm that pilfered secrets from an American did not cost him the Senate election, but it could become an issue for him in the 2016 presidential race.

Lynn Morrison v. B. Braun Medical: Morrison was a medical sales representative for B. Braun Medical Inc., a Pennsylvania-based company that manufactured and sold pharmaceutical and medical products. From 1998 until she was fired in 2007, she sold pain control products to hospitals in Michigan. Some years, she was one of the top sales reps for B. Braun. But she also caused a problem for the company. She repeatedly informed officials at the firm that she would not promote the “off-label” use of the company’s medical products—this is the practice, often illegal, of encouraging medical professionals to use a drug or medical product in ways other than those approved by the Food and Drug Administration. She also told supervisors she would not participate in any illegal kickback actions.

Several times Morrison raised concerns within the company that B. Braun was engaged in shady practices. At a company training session in 2000, she later testified, trainers instructed sales reps to push off-label uses of Pentaspan, a blood volume expander. At a 2003 sales meeting, Morrison noted, a sales rep told her and others how to circumvent anti-kickback laws. At another sales meeting in 2006 that Morrison attended, B. Braun managers and sales reps were told to promote off-label uses of Accufuser, a pain control pump. After Morrison expressed objections to company practices, she maintained, B. Braun imposed upon her sales quotas she considered unattainable. She was dismissed when she did not meet these goals.

Morrison sued the company, contending that B. Braun had fired her because she had refused to violate the law. “This was essentially a whistleblower case,” says Deborah Gordon, Morrison’s attorney. “She was willing to stand up for not having her company break the law. It was clear they were breaking the law.”

B. Braun did not respond to requests for comment.

After a trial, a jury sided with Morrison and awarded her $880,000. B. Braun appealed and hired Ted Cruz to argue the case in 2011, before the US Court of Appeals for the 6th Circuit. Cruz had two parts to his attack on Morrison. First, he asserted that she had failed to prove that B. Braun had directed her to violate the law and that a claim of wrongful discharge required proof that an employer had instructed the employee to break the law. Second, Cruz argued that Morrison had not presented sufficient evidence that her refusal to violate the law was why she had been canned.

According to Gordon, Cruz called her following the oral arguments and offered to settle the lawsuit. “He started telling me that oral arguments went well for him,” she says. “But that was not what I remembered. ‘Well,’ he said. ‘I got the transcript.'” Cruz offered to send Gordon a copy. “Sure,” she recalls thinking, “since he paid for it.” When Gordon received the transcript, she reviewed it and concluded that the judges on the appeals court had been tough on Cruz’s arguments. She decided not to settle.

Cruz’s Senate office did not respond to requests for comment.

The appeals court soon reached a decision and soundly rejected Cruz’s argument. “B. Braun’s proposed definition of wrongful discharge…is an inaccurate statement of the law,” the court declared. It also noted, “Morrison introduced sufficient evidence from which a reasonable juror could have concluded that one of the reasons that made a difference in B. Braun’s decision to fire Morrison was her refusal or failure to violate the law.” Cruz lost; the $880,000 award for Morrison was affirmed. As with the Shandong Linglong case, Cruz was not able to get a corporate wrongdoer off the hook.

To Gordon, Cruz—who had already established a reputation as one of the nation’s leading appellate attorneys—had not come across as impressive or unusual. “He was a run-of-the-mill corporate defense attorney,” she says, “who’d defend anything anytime a corporation wants to defend something.”