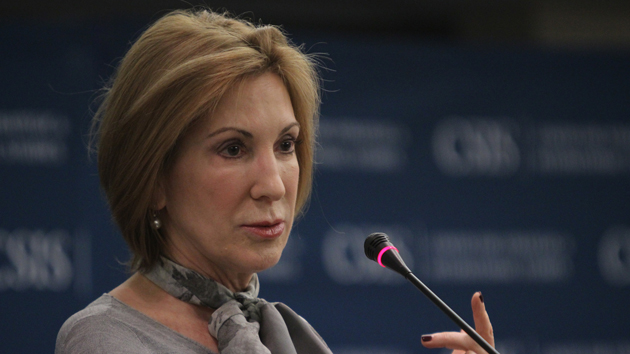 Carly Fiorina, the Republican presidential candidate and former Hewlett-Packard CEO, is marketing herself as a pragmatic, fiscally responsible businesswoman—the only GOP candidate who knows, as she says, “how the economy actually works.” Yet during her unsuccessful US Senate bid in 2010, her opponents slammed her record at HP. When she led the firm, it laid off 18,000 workers, and its stock declined by 41 percent. Eventually, she was forced out of the company but departed with a $21 million golden parachute. Now she may need to answer for another managerial blunder. For more than four years, she was a deadbeat and didn’t pay the bills she owed for her Senate campaign. She only settled these outstanding debts just before she jumped into the 2016 race.

Until late last year, Fiorina was close to $500,000 in debt from her 2010 run, nearly all of it in unpaid compensation to campaign staffers and outside consultants, according to Federal Election Commission filings. In 2013, the San Francisco Chronicle reported that Fiorina owed serious cash to former campaign operatives, several of whom were unsure about when they would be paid for their work. And they complained they were not getting clear information from Fiorina about when she would get them their money. At that time, she owed $60,000 to her 2010 campaign manager, Marty Wilson; $20,500 to Beth Miller, a consultant and former aide to California Gov. Pete Wilson; and $30,000 to the firm of veteran GOP political consultant Joe Shumate.

Shumate, who also worked for former Gov. Arnold Schwarzenegger, died suddenly during Fiorina’s Senate race. John Allan Peschong, another adviser whom the campaign owed money, told the Chronicle, “I would hope that Carly Fiorina would pay his widow the money that was owed him at the time of his death.” Wilson, Fiorina’s campaign manager, said in 2013 that he didn’t recall if he “got that granular” with Fiorina regarding the campaign’s mounting debt near the finish line. Earlier this year, the Washington Post reported that the compensation delay had left her former staffers bitter.

Postcampaign debt is not uncommon, particularly in close and expensive contests. Carly for America press secretary Leslie Shedd, in a statement to Mother Jones, points out that Hillary Clinton owed a substantial amount of money after her 2008 defeat. “There was some leftover debt with Carly Fiorina’s Senate campaign in 2010,” Shedd notes. “However, this issue has been resolved and the campaign debt has been paid off in full.”

But the matter wasn’t settled until Fiorina, who lost her Senate race by 10 points to incumbent Democratic Sen. Barbara Boxer, was on the cusp of a new political endeavor. In January, Fiorina—whose own wealth is estimated up to $120 million—personally donated $487,000 to her Senate campaign, and then she made good on the back pay, including the money owed to Shumate’s family, according to a February 2015 Federal Election Commission filing. Two months later, she officially entered the presidential race.

The question remains: Why did it take this multimillionaire so long to pay her staffers?

But for Wilson, it’s now water under the bridge. “I’m glad Carly satisfied the debt,” he says. “We’re happy campers.”