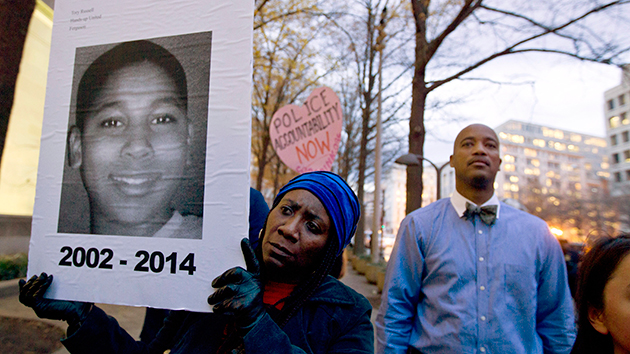 A protester holds up a picture of Tamir Rice on December 1, 2014.Jose Luis Magana/AP

While all eyes were on the unrest in Baltimore last week following Freddie Gray’s death in police custody, many miles away Gov. John Kasich of Ohio announced a new advisory board intended to improve ties between police and communities across his state. The initiative, one among a few in the country, comes as Ohio authorities continue to face questions about two controversial police killings of black people. Unlike in Baltimore, where six officers were charged on Friday with crimes including manslaughter and murder, none of the officers involved in the recent killings in Ohio has faced criminal prosecution, despite video footage raising stark questions in both cases about the use of lethal force.

A grand jury declined to indict the two officers involved in the fatal shooting last August of 22-year-old John Crawford at a Walmart in Beavercreek, a predominantly white suburb of Dayton. Crawford allegedly brandished a rifle in a store aisle, and when Cleveland police officer Sean Williams and his partner, Sergeant David Darkow, came upon Crawford, Williams quickly fired two shots. The officers later told investigators that Crawford had ignored commands to drop the weapon, which turned out to have been a BB gun for sale on a store shelf. A US Department of Justice review of the case is pending.

“Half a year is an extremely long time” for the investigation to remain unfinished, says an Ohio legal expert.

In Cleveland, the Cuyahoga County Sheriff’s Department continues to investigate the death of Tamir Rice, a 12-year-old who’d been playing with a toy gun in a park near his home last November. Responding to a 911 call about someone pointing a pistol that was “probably fake,” Cleveland PD officers drove up to the scene, where surveillance camera footage showed one of the officers, Timothy Loehmann, shooting Rice almost instantly upon arrival. The other officer then tackled and restrained Rice’s sister when she tried to run over to her dying brother. More than five months since Rice’s death, the investigation has not been completed, despite the explicit video evidence and Loehmann’s dubious record as a police officer.

“Half a year is an extremely long time,” says Ayesha Bell Hardaway, a professor at Case Western Reserve University and a former Cuyahoga County assistant prosecutor, especially given the video, the details of the 911 calls, and “the questions raised about Officer Loehmann’s fitness for duty.”

Lewis Katz, a Case Western Reserve professor specializing in criminal law, feels that “the case is clear-cut.” And he says that he expects Cuyahoga County Prosecutor Timothy J. McGinty to bring charges soon. (McGinty is in the midst of a prosecution against another Cleveland officer for a 2012 police shooting in which two unarmed people were killed, a case expected to end shortly.)

Cleveland city attorneys suggested that the 12-year-old Rice was responsible for his own death because he’d failed “to exercise due care to avoid injury.”

Shortly after Rice’s death, the Justice Department released the findings of a two-year civil rights investigation into the Cleveland Police Department, which revealed a pattern of “unreasonable and unnecessary use of force.” Nevertheless, when Rice’s family filed a wrongful death suit against Cleveland, city attorneys responded suggesting that Rice was responsible for his own death because he’d failed “to exercise due care to avoid injury.” The statement drew outrage; Cleveland’s mayor later apologized for the insensitivity and revised the language. City attorneys have since asked to halt the Rice family’s lawsuit until the criminal investigation is complete. But Rice’s family opposed the request on Monday, arguing that doing so would risk “the loss of critical evidence” because key witnesses could move away or become less reliable over time.

Following the announcement of murder charges in Baltimore on Friday, civil rights activists called on the Ohio attorney general once again to bring charges against the officers involved in killing Rice and Crawford. “Public pressure seems to have certainly played a role in Baltimore,” Hardaway says. “As much as I want to resist the urge to compare what has happened in Baltimore with what has yet to happen in Cleveland,” she says, “I’m concerned by the fact that the same transparency is not taking place in Cleveland.”

Ohio’s new 12-member police advisory board, comprised of law enforcement officials and community members, will set standards governing the use of deadly force and the hiring and recruiting for police departments across the state. But it remains to be seen what changes the board will bring, says Seth Stoughton, a law professor at the University of South Carolina who studies the regulation of police. “Typically states haven’t exercised a tremendous deal of control over local police agencies,” he says, and it’s rare for states to step into matters of police discipline.

“Policing is fundamentally local,” agrees David Harris, a professor at the University of Pittsburgh School of Law. Strengthening ties between police and communities requires building long-term relationships, and “difficult, sustained efforts to communicate and help each other,” he says. “Those efforts cannot be done through state-wide rule making, however well intentioned it might be.”

Building trust in a community like the one where Rice was killed may be particularly challenging after a plodding investigation, whatever the result. Rice’s mother recently moved to a homeless shelter to get out of the neighborhood where her son died. She and her family still await closure, and not only with the legal investigation. “Because it is unknown whether there may need to be an additional medical examination,” a family court filing stated, “the body of Tamir Rice has not [been] put to rest.”