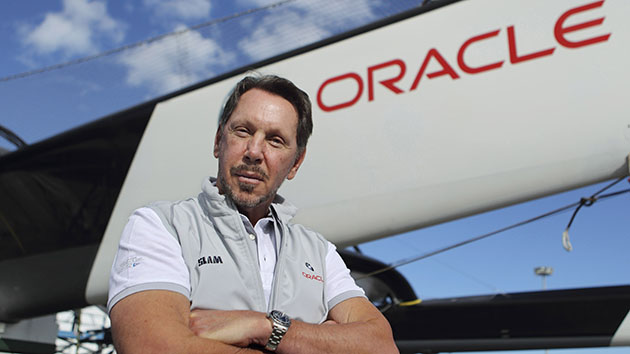 An eccentric billionaire with a sculpted goatee and a penchant for daredevil feats, Larry Ellison isn’t quite Tony Stark, but he’s close. The founder of software giant Oracle partly inspired Robert Downey Jr.’s Iron Man character. And like Stark, he’s made a hobby of championing fanciful ventures. According to Politico, Ellison has found his latest challenge: getting Marco Rubio into the White House.

Ellison will hold a June 9 fundraiser for the Republican senator at his Woodside, California, estate that will feature a $2,700-per-person VIP reception and photo op with the candidate and a dinner for supporters who have raised more than $27,000 for Rubio’s presidential campaign. It’s not an official endorsement, but having the world’s fifth-richest person in his corner would be a coup for Rubio, particularly as his fellow Floridian Jeb Bush gobbles up donations from the Sunshine State’s wealthiest Republicans at a record pace. Ellison, 70, is worth an estimated $54 billion. (His income in 2013, when he was still Oracle’s CEO, broke down to about $38,000 per hour.)

Though he’s supported Democrats in his home state of California, Ellison donated $3 million to Mitt Romney’s super-PAC in the waning days of the 2012 election. In the final month of the 2014 midterm elections, he hosted a fundraiser for the National Republican Senatorial Committee that featured Sen. Rand Paul, whose positions on privacy and government surveillance—major issues in the tech world—are the polar opposite of Rubio’s pro-surveillance stance.

If he continues to back Rubio, Ellison wouldn’t be the first billionaire to do so. Miami car dealer Norman Braman may put at least $10 million behind Rubio. And if Ellison turns electing Rubio into one more of his Starkesque undertakings, there’s no telling how far he might go. Given that Ellison might become one of the major players of the 2016 election, here are five things to know about him:

He bought a Hawaiian island: In 2012, Ellison bought 97 percent of Lanai, the sixth largest of the Hawaiian Islands, for $300 million. The island has some 3,000 residents, whose livelihoods now depend on Ellison’s ambitious plans to revitalize the island’s floundering tourism industry. “Ellison has explained that Lanai feels to him like ‘this really cool 21st-century engineering project’—and so far, his approach, which seems steeped in the ethos of Silicon Valley, has boiled down to rooting out the many inefficiencies of daily life on Lanai and replacing them with a single, elegantly designed system,” the New York Times Magazine reported last fall. “It’s the sort of sweeping challenge that engineering types get giddy over: a full-scale model.”

He NASCARized the America’s Cup: After Ellison’s Team Oracle USA won the America’s Cup yacht race in 2010, Ellison earned the right to set the rules for the 2013 cup. His brash decisions sparked controversy and led to headlines such as this one from Business Insider: “Larry Ellison Has Completely Screwed Up The America’s Cup.” Ellison had set out to remake the race into a NASCAR-style event with significant television viewership in the United States. But that has made it more expensive and dangerous. His new rules, which included requiring each team to sail a speedy but hard-to-control 72-foot catamaran, also made the race too costly for most teams. Just four teams signed up for the 2013 cup, running up a tab between $65 million and $100 million per team. (Organizers had predicted 15 teams would participate.) Worse, the boats proved deadly. British sailing Olympic gold medalist Andrew Simpson was killed when his team’s catamaran capsized during a training run near San Francisco in 2013.

He sees death as another corporate foe to “outfox”: Like most people, Ellison does not want to die. Unlike most people, he has spent more than $430 million to defeat death, according to the Washington Post. “Death makes me very angry,” Ellison said, according to Adam Gollner, the author of a book about tech billionaires pouring money into anti-aging research. “Death has never made any sense to me. How can a person be there and then just vanish, just not be there?” According to Ellison’s biographer, he sees death as “just another kind of corporate opponent he can outfox.” Every year, the Ellison Medical Foundation gives away more than $40 million to fund efforts to discover the secret to eternal life, or as the foundation’s website puts it, to support “basic biomedical research on aging relevant to understanding lifespan development processes and age-related diseases and disabilities.”

He may or may not have flown a fighter jet under the Golden Gate Bridge: Rumor has it that Ellison once flew a fighter jet under San Francisco’s iconic Golden Gate Bridge—but no one knows if it actually happened. Ellison denied this rumor in a 2004 interview with Charlie Rose, saying such a feat would violate federal regulations, “so of course not.” Then again, he’s obviously thought about it. He told Rose that if he had done it, he would have used one of his fighter planes.

In the 1990s, Ellison bought a Marchetti, an Italian fighter jet. He had tried to purchase a Soviet MiG-29 jet fighter but the Bureau of Alcohol, Tobacco, and Firearms would not let him bring it into the country. “A.T.F. considers the MiG a weapon,” Ellison explained to Vanity Fair in 1997. “They’re a bit concerned that I’ll have something faster than the army, navy, or air force. I mean, you can’t just decide you want to go and buy a MiG on a Tuesday.”

But Ellison does like to to make expensive purchases on the fly—or at least he wants the ability to do so. That’s why he has put up collateral for a $4 billion line of credit “in case I go shopping and something catches my eye,” he explained in a 2012 interview on CNBC.

He’s known as a ruthless businessman: There are plenty of stories about Ellison’s combative corporate style, such as this one from journalist Karen Southwick’s 2003 book on Ellison called Everyone Else Must Fail: At an annual Oracle sales award banquet in Hawaii, Ellison displayed a photograph of a rival company’s headquarters and declared, ”We’re going to run them out of business and buy that building, which we’re going to bulldoze. After that, we’ll salt the earth. Then we’ll go after their families.”