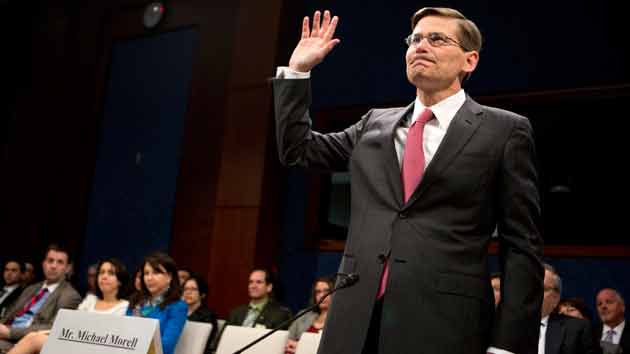 Former CIA Deputy Director Michael Morell is sworn in as he testifes before the House Intelligence Committee. Manuel Balce Ceneta/AP

For a dozen years, the Bush-Cheney crowd have been trying to escape—or cover up—an essential fact of the W. years: President George Bush, Vice President Dick Cheney, and their lieutenants misled the American public about the WMD threat supposedly posed by Saddam Hussein in order to grease the way to the invasion of Iraq. For Bush, Cheney, and the rest, this endeavor is fundamental; it is necessary to protect the legitimacy of the Bush II presidency. Naturally, Karl Rove and other Bushies have quickly tried to douse the Bush-lied-us-into-war fire whenever such flames have appeared. And in recent days, as Jeb Bush bumbled a question about the Iraq War, he and other GOPers have peddled the fictitious tale that his brother launched the invasion because he was presented lousy intelligence. But now there’s a new witness who will make the Bush apologists’ mission even more impossible: Michael Morell, a longtime CIA official who eventually became the agency’s deputy director and acting director. During the preinvasion period, he served as Bush’s intelligence briefer.

Host Chris Matthews asked Morell about a statement Cheney made in 2003: “We know he [Saddam Hussein] has been absolutely devoted to trying to acquire nuclear weapons. And we believe he has, in fact, reconstituted nuclear weapons.” Here’s the conversation that followed:

MATTHEWS: Was that true?

MORELL: We were saying—

MATTHEWS: Can you answer that question? Was that true?

MATTHEWS: Well, why’d you let them get away with it?

MATTHEWS: You’re the briefer for the president on intelligence, you’re the top person to go in and tell him what’s going on. You see Cheney make this charge he’s got a nuclear bomb and then they make subsequent charges he knew how to deliver it…and nobody raised their hand and said, “No that’s not what we told him.”

MATTHEWS: To tell the truth.

MORELL: As the briefer, my job is to carry CIA’s best information and best analysis to the president of the United States and make sure he understands it. My job is to not watch what they’re saying on TV.

The discussion went on:

MATTHEWS: So you’re briefing the president on the reasons for war, they’re selling the war, using your stuff, saying you made that case when you didn’t. So they’re using your credibility to make the case for war dishonestly, as you just admitted.

MATTHEWS: You just admitted it.

MORELL: I’m just telling you what we said—

MATTHEWS: They gave a false presentation of what you said to them.

There’s the indictment, issued by the intelligence officer who briefed Bush and Cheney: The Bush White House made a “false presentation” on “some aspects” of the case for war. “That’s a big deal,” Matthews exclaimed. Morell replied, “It’s a big deal.”

And there’s more. Referring to the claims made by Bush, Cheney, and other administration officials that Saddam was in league with Al Qaeda, Morell noted, “What they were saying about the link between Iraq and Al Qaeda publicly was not what the intelligence community” had concluded. He added, “I think they were trying to make a stronger case for the war.” That is, stronger than the truth would allow.