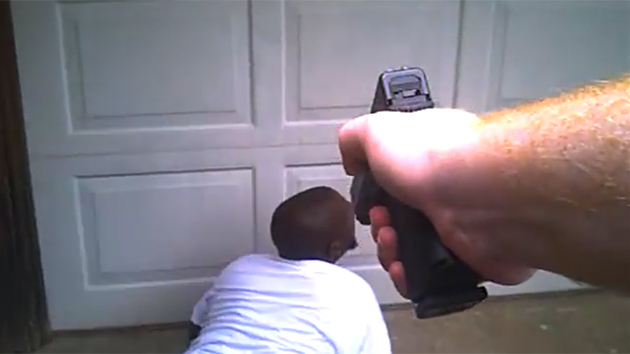 Screenshot from police video of the shooting of Jason Harrison in Dallas on June 14, 2014. Harrison’s family obtained the footage in a civil rights lawsuit and chose to publicize it.

From Ferguson last summer to Baltimore this spring, police killings of unarmed black men under questionable circumstances have sparked outrage, civil unrest, and a heated national debate about policing in the United States. As Mother Jones and others have reported, there isn’t sufficient data available for determining how many people are shot to death or otherwise killed by police each year, or how the issue might be trending. But more such incidents appear to be getting captured on video than ever before, due in part to the ubiquity of cellphone cameras. The footage—not only from cellphones, but also surveillance cameras, dashboard cameras in police cars, and police-worn body cameras—has caused a tectonic shift in public awareness.

Below are 13 videos of fatal police encounters recorded between March 16, 2014, and April 4, 2015. Most of the suspects killed were black. A majority of the suspects were unarmed. In three cases, the suspects killed reportedly had serious mental-health problems—which may have been known to the police in at least two of those cases at the time of the shootings.

Mother Jones has contacted law enforcement officials about the status of these 13 cases: Investigations are ongoing in eight of them. In one case, now six months old, the two officers involved still haven’t been questioned by investigators. Officers in the five other cases have been absolved of wrongdoing via local or state proceedings. (One of those five cases is currently under review by the US Department of Justice.) Three of the 24 officers total who were involved in the 13 cases are currently facing criminal charges.

WARNING: The videos below contain graphic footage that some viewers may find disturbing.

What happened: James Boyd, a homeless man who reportedly suffered from mental illnesses for years, was shot by Albuquerque police officers Keith Sandy and Dominique Perez after a standoff over Boyd’s hillside encampment in March 2014. Randi McGinn, the special prosecutor appointed to take over the case in April 2015, told Mother Jones that she is likely to pursue homicide charges, originally brought by the district attorney, and will make a determination in the next few weeks.

What happened: Richard Ramirez was in the back of a car that was pulled over by officer Grant Morrison. Morrison later testified that, after he ordered the passengers to put up their hands, Ramirez repeatedly dropped his left hand. Morrison stated that he thought Ramirez—who’d been identified as a suspect in an armed robbery the prior night—was reaching for a gun, so he shot him three times. Ramirez was unarmed. (In February 2013, Morrison shot and killed another man while on duty, and was cleared of any wrongdoing.) In January 2015, a coroner’s jury ruled the action a justifiable homicide.

What happened: Harrison’s mother called police saying that her son was off his medication and acting out, and requested help to get him to a hospital. When Dallas police officers John Rogers and Andrew Hutchins arrived at the front door, Harrison’s mother stepped out, letting the officers know that her son was bipolar and schizophrenic. When Harrison came to the door, the officers told him to drop a screwdriver he was holding, and shot him when he failed to comply. According to the Dallas Morning News, the officers’ attorney said that they feared for their lives, because killing someone using a screwdriver would be “pretty easy. It’ll only take one blow.” In April 2015, a grand jury decided not to indict the officers.

What happened: In July 2014, police approached Eric Garner on a Staten Island street after Garner had broken up a fight, and then started questioning him about selling loose cigarettes. NYPD officer Daniel Pantaleo wrapped his arm around Garner’s neck from behind in a takedown maneuver and held Garner on the ground as Garner repeatedly said, “I can’t breathe.” Garner was later pronounced dead at the hospital. In December 2014, a grand jury decided not to indict Pantaleo.

What happened: Crawford, 22, was walking around in a Walmart holding a BB gun that had been for sale on the store’s shelves. Responding to a 911 call about a man waving a gun, Beavercreek officer Sean Williams and Sergeant David Darkow arrived at the Walmart. The officers later told investigators that Williams opened fire after Crawford failed to comply with their orders to drop the gun. A grand jury decided in September 2014 not to indict the officers. The US Department of Justice launched a review of the case last September, which is ongoing, a DOJ spokesperson confirmed to Mother Jones.

What happened: Dillon Taylor, his brother, and his cousin were outside a convenience store and allegedly matched the description from a 911 call about three men, including one brandishing a gun. Officer Bron Cruz confronted the trio and began following Taylor, who initially walked away with his back toward Cruz. Taylor then turned around and kept walking backward, and had both hands in his waistband, according to Cruz. Cruz said he thought Taylor had a gun, and he repeatedly yelled at Taylor to get his hands out, before firing two shots. Taylor was unarmed. In September 2014, the Salt Lake City District Attorney determined the shooting was justified.

What happened: A bystander’s cellphone video shows Powell, 25, walking around outside a corner grocery store after allegedly stealing energy drinks and pastries. As he paced back and forth, a police car pulled onto the sidewalk just up the street and two police officers got out. Powell, who was brandishing a knife, began to approach the officers (whose names have not been released), telling them to shoot him. After a pause, he took another step toward the officers and they opened fire. St. Louis Metro police chief Sam Dotson later stated that Powell “came at the officers” while gripping the knife. In February, the St. Louis Metropolitan Police Department did not request charges when it handed off its investigation to the circuit attorney’s office, whose probe is ongoing, a spokesperson confirmed.

What happened: Rice, 12, was playing in a local park when someone called 911 and reported that a person, “probably a juvenile,” was waving a gun around that was “probably fake.” Police officers Timothy Loehmann and Frank Garmback pulled up to Rice in their patrol car and Loehmann got out and shot Rice almost instantly. No charges have been filed in the case. As Mother Jones first reported last week, the Cuyahoga County Sheriff’s Department, which took control of the case in January, has yet to interview the two officers in its ongoing investigation.

What happened: Reid was a passenger in a car that was pulled over for allegedly running a stop sign. Officers Braheme Days and Roger Worley approached the car, and despite verbal warnings from the officers, Reid opened his door and reportedly got out of the car with his hands up, after saying “I ain’t doing nothing. I’m not reaching for nothing, bro,” according to the Associated Press. Both Days and Worley shot him. The officers were placed on paid administrative leave pending the investigation, and Reid’s family has filed a civil rights lawsuit in federal court against the city of Bridgeton. (Days is also facing a separate lawsuit for alleged rape.)

What happened: After responding to a call of a man throwing rocks in a grocery store parking lot, three Pasco police officers tried to arrest Zambrano. They pursued him on foot, shooting at him as he ran, and they fired at close range as he turned around to face them. In the video, his hands appear to have been empty. Officers Ryan Flanagan, Adam Wright, and Adrian Alaniz were placed on paid leave, and an investigation is ongoing.

What happened: Six police officers were responding to a 911 call about an alleged robbery and assault on LA’s Skid Row, in which Keunang was reportedly a suspect. During a struggle with police, Keunang, who reportedly suffered from mental health problems, allegedly reached for an officer’s gun, prompting several officers to open fire. The three officers who fired their guns—Sergeant Chand Syed, and Officers Francisco Martinez and Daniel Torres—have been reassigned to administrative duty and an internal police department investigation is ongoing, the LAPD confirmed to Mother Jones. Keunang’s family has filed a $20 million civil claim against the city.

What happened: Responding to a call of a man acting erratically, police handcuffed and restrained the 32-year-old White. According to investigators, White became unresponsive and received CPR in an ambulance on the way to the hospital, where he eventually died. Police called it an “in-custody non-shooting death,” but witnesses on the scene said the officers beat White and that a police dog bit him in the face. An investigation by the Cumberland County prosecutor’s office is ongoing. The officers in the case, Louis Platania and Rich Janasiak, are both on administrative leave, according to news reports.

What happened: Dashboard camera footage showed Scott running away from his vehicle after North Charleston police officer Michael Slager pulled Scott over for a broken brake light. In the following minutes, recorded on a bystander’s cellphone, Slager caught up to Scott in an open field, and after a short struggle, Scott, who was unarmed, broke free and began to run away. Slager then shot Scott multiple times from behind. Slager was fired from his job and faces a felony murder charge.