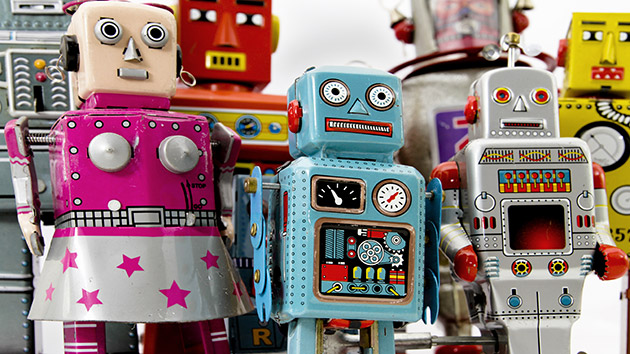 The coming robot invasion is suddenly a hot topic again. This week, Fresh Air interviewed Martin Ford, whose book Rise of the Robots: Technology and the Threat of a Jobless Future was just reviewed in the New York Times by Barbara Ehrenreich. The Harvard Business Review published a long article with advice for protecting your career from super-smart robots. And NPR’s Planet Money has been producing a series of stories on how machines are getting really good at doing tasks from serving food and writing news articles to reading emotions.

As MoJo‘s Kevin Drum, who’s been following this rapidly emerging trend for while, explains, by 2030 or 2040 we could see a major economic shift in which robots and computers start to make significant chunks of the human workforce obsolete: “When the robot revolution finally starts to happen, it’s going to happen fast, and it’s going to turn our world upside down.”

So just how worried should you be that a bot or app is about to force you into early retirement? Planet Money made a nifty tool that spits out the chances that your job may soon be done by robots or computers. Some selected results:

Telemarketers: 99.0% chance of being automated

The numbers, based on a 2013 study by an economist and a machine-learning prof from Oxford, are all over the board. In general, jobs that require negotiation, creativity, and people skills tend to have a lower chance of being done by a robot. So dancers and preschool teachers can sleep easy. As can CEOs, who will no doubt find a way to provide essential oversight of the new 24-7, benefit- and bathroom break-free workforce.

Some of the findings seem to push the bounds of what we’re currently willing to let machines do. Robocalling people during dinnertime, sure. But will we really see a robot ump calling the 2040 World Series? In theory, a computer can call a strike more accurately than a person, but what’s the fun in shouting “Get your vision algorithm debugged!” at a camera behind home plate?

Only a mindless machine would read these as precise probabilities. “The researchers admit that these estimates are rough and likely to be wrong,” Planet Money concedes. Now if only there were a machine that was good at analyzing data to make reliable estimates…