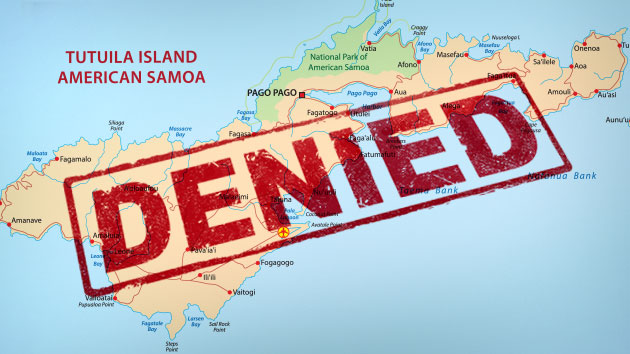 American Samoans are the only people born on United States soil but denied birthright citizenship. And so it will remain—at least for now.

On Friday, the US Court of Appeals for the District of Columbia ruled that the Fourteenth Amendment’s guarantee of birthright citizenship does not apply to island territories including American Samoa. Agreeing with the Obama administration’s lawyers, the DC Circuit relied on and even expanded the scope of a set of racially-charged, Colonial-era cases that refer to “savages” and “alien races” to reach their decision.

(Mother Jones covered this case back in February; on his HBO show Last Week Tonight, John Oliver subsequently included the issue in a segment on rights in US territories.)

Opposing a group of American Samoans seeking birthright citizenship, the US government based its argument on a set of cases legal scholars have denounced as racist and imperialist. Known as the Insular Cases, the Supreme Court in the early years of the 20th century created a distinction between the rights of newly acquired island territories such as American Samoa and Puerto Rico and territories such as Arizona that they assumed would one day become states—and which were increasingly populated by white people. As Mother Jones reported back in February:

The DC Circuit’s unanimous opinion attempts to distance itself from this controversial history before ultimately relying on the Insular Cases to rule against the American Samoans. Writing for a unanimous three-judge panel of the court—comprised of the three most conservative justices on the DC Circuit—Judge Janice Rogers Brown first denounced the Insular Cases as “without parallel in our judicial history” for the “manner in which the results were reached, the incongruity of the results, and the variety of inconsistent views expressed by the different members of the court.” Brown also acknowledged, in the politest way possible, that “some aspects of the Insular Cases’ analysis may now be deemed politically incorrect.”

Nevertheless, the DC Circuit found them “both applicable and of pragmatic use in assessing the applicability of rights to unincorporated territories.” In fact, the court expanded the scope of the Insular Cases, becoming the first court to explicitly apply the Insular Cases to the Citizenship Clause of the Fourteenth Amendment. That wasn’t the only way the DC Circuit’s opinion broke ground in this case. As Neil Weare, the civil rights lawyer who argued the case in February on behalf of a group of American Samoans, noted in a statement Friday, “Today marks the first time a federal court of appeals has ruled that citizenship by birth on US soil is not a fundamental right.”

Though the group of American Samoans lost on Friday, their chances of winning an appeal to the entire DC Circuit—which is more liberal than the three conservative judges randomly selected to hear this case—could be higher.