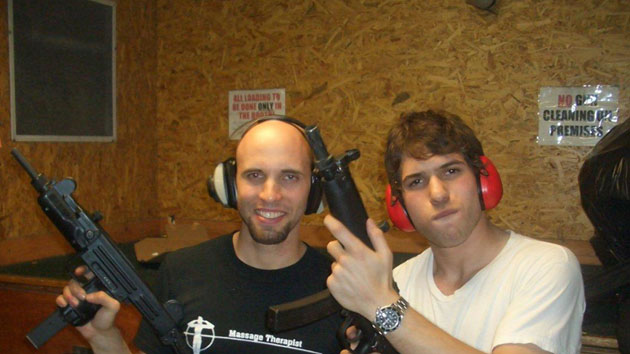 David Packouz and Efraim Diveroli at a Miami gun range in 2006.

In early 2007, three stoner twentysomethings won a Defense Department contract to supply the Afghan military with $300 million worth of ammunition. “The dudes,” as they came to be known—a ninth-grade dropout, a masseur, and a low-level pot dealer, all with little or no experience but plenty of nerve—had begun bidding on Pentagon arms contracts and winning out over massive international conglomerates. The Afghan contract wasn’t their first, but it was by far their largest. They would have to source thousands of tons of mortar rounds, grenades, rockets, and 100 million rounds of AK-47 ammunition and deliver all of it to Kabul at a particularly fraught time for the Afghan war effort. 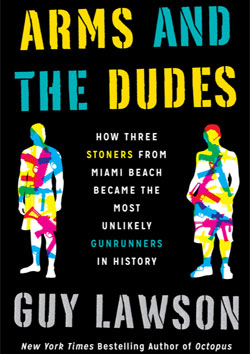 Arms and the Dudes publishes June 9.

To fill the order, though, the dudes secretly repackaged millions of rounds of decades-old, surplus Chinese ammo—illegal under the contract terms—before shipping them to Afghanistan. It was all going fine until they got caught by Pentagon investigators and wound up with their mugshots spread across the front page of the New York Times.

Their story is detailed in Guy Lawson‘s new book, Arms and the Dudes, a wildly entertaining saga with dual narratives. The first involves blackmail, criminals, hustlers, corrupt government officials, and three kids in way over their heads. The other, and for Lawson more important, side of the story, concerns how the Pentagon came to use private contractors like the dudes as proxies—and eventual fall guys—to secure weapons from gray market arms dealers, the only people who could supply what it needed. I caught up with Lawson to talk about Pentagon contracting, weapons proliferation, and the act of “buying up guns and pouring them into conflict zones like it’s gonna solve the fucking problem.”

Mother Jones: One of the takeaways from your book was that pretty much anyone with enough gall can be an arms dealer. How could regular people land these Pentagon contracts?

Guy Lawson: In the beginning you had these no-bid, multibillion-dollar giant contracts going to “death star” corporations like Halliburton and Blackwater. It was a public relations fiasco, and the Bush administration’s reactive way of governing just went and did the opposite. They created rules to favor small businesses with the idea that business can always be more efficient than government, and the competition is inherently a good value. But they didn’t pause to think that the competition is going to be about weaponry, ammunition, guns. The policy decision buried inside the FedBizOpps logic is, “Let’s go cheap and nasty and fast.”

There was never a really serious, thought-out process for delivering arms appropriately.

There was never a really serious, thought-out process for delivering arms appropriately. The competition became among any kind of grifter who could get qualified to deal on FedBizOpps—which really meant getting certain kinds of licensing and minimal background checks, and then having the guts and wherewithal to source this kind of material through the only places you could get it: gunrunners in the Balkans and throughout the former Soviet Bloc.

MJ: The dudes worked with a shadowy Swiss arms dealer who essentially used them as a front to get a slice of the Pentagon contracts. Meanwhile, he was shipping arms to other places where they were allegedly used by militias and warlords. Did the US know?

GL: It had to know. There’s a larger sense of duty here that the United States government owes to civilians in Liberia, the Congo, or children in the Levant. The people the government was dealing with—with the dudes as their scrim of plausible deniability—were the only people who could get what it needed given the circumstances: There were two wars going on. The Bush administration was very belligerent towards China and Russia, the other two main suppliers of this kind of weaponry, so they ruled out that possibility. It devolved into: There was really only one possible place to go.

MJ: You first encountered this story in the pages of the New York Times.

GL: The Times ran a story on the front page, running the mugshots of these two kids as if they’ve fooled the Pentagon, as if the Pentagon had not written rules properly, because, I don’t know, they were negligent? [I thought,] “What if it was Pentagon policy? What if the Pentagon knew exactly what it was doing? What if these kids were just fall guys?”

“The ammunition at the center of this story is almost certainly being used in Syria right now, either by ISIS or Iran-backed Shia forces.”

If you look at the system of weapons procurement, the dudes were doing exactly what the government wanted. The government needed somebody to go in and buy up as cheaply as possible as much ammunition as possible and get it to the war zones. They had to deal with the Swiss arms dealer, the sleazy Albanian government officials, they had to bribe and pay off officials and organized crime figures—all those things were inevitable. It’s like that scene in Casablanca: “I’m shocked that there’s gambling going on in this casino!” That’s the nature of the business.

MJ: Why would the Pentagon prop up dealers believed to be involved in activities that squander our interests in other regions?

GL: It would seem, in retrospect, that there was a  kind of malevolence to this, or that the stupidity amounted to bad intention, but I don’t really feel like that. The United States government set out to break the law, and then its own law enforcement agency set out to stop it from breaking the law. Did they care? And who is the “they”? Each person in the chain of command in these various organizations acted with shocking banality—just interested in their own careers, their own aggrandizement, and their own agenda, with no vision of what the stakes are, the purpose of the mission, what success might look like. So how can you possibly succeed?

MJ: What’s the risk of this kind of policy?

GL: Here’s something for you: None of this has changed! The risks are apparent in the headlines every day in Syria, Iraq. Proliferation is proliferation—the idea that you can pour a hundred million rounds of AK ammunition into a war zone with positive consequences strikes me as insane. The Albanian-Chinese ammunition at the center of this story is almost certainly being used in Syria right now, either by ISIS or Iran-backed Shia forces. You know, half the guns that went to Iraq were lost. Lost! This policy doesn’t work. These weapons are doing strategic harm. John McCain was quoted just the other day saying we need to get more weapons into Syria. What bigger favor can we do to kids in the Levant than pouring more fucking guns in there? It’s the age of squander.

MJ: Last month, one of the main US-backed rebel groups in Syria disbanded and joined an alliance of Islamist militias. They’d been one of few groups given TOW anti-tank rockets.

“These guys were incredibly cunning, really smart, and really stupid at the same time. Maybe in that way they’re just like the Pentagon.”

GL: Right. Shit like that happens in war. You have these massive Russian cargo planes touching down on tarmacs laden with weapons. (The biggest weapon of mass destruction in history is the AK-47, not Iranian nuclear weapons.) They arrive with nobody remarking on them and nobody being held accountable for the unintended consequences for a war that looks to be without end. Maybe you have to say: Well, maybe that is the policy: Have them fight each other until they kill each other out. That’s a pretty dark way to look at it, but how else do you explain such an irrational set of actions?

MJ: From your perspective, did the dudes themselves do anything wrong?

GL: Yeah. At least two of them knew that they were right up on the edge of breaking the law. It wasn’t like they were innocents. They were naïve. They were playing a game way too sharply. They tragically misunderstood the world they were dealing with. They didn’t have a clue that they were pawns. I don’t think there’s any question that they were behaving in a greedy, reckless, and irresponsible way, and that at the heart of it they didn’t give a shit about the ammo. These guys were incredibly cunning, really smart, and really stupid at the same time. Maybe in that way they’re just like the Pentagon.

MJ: How many people are out there doing the same kind of thing?

GL: It is a gray business. Buying up munitions from Balkan dealers and manufacturers inherently has a political and criminal dimension to it. If it was General Dynamics doing this thing, would they have had a different way of going about it? Yeah, sure. It would have involved lobbyists in Washington. Would they have “broken” the law? No. But would they have been doing the same thing in substance? Yes. To me the kids are hilarious, crazy, stoners. There’s lots of things about them that are entertaining and I hope people enjoy the book, but underneath it all, there’s an important reality lurking.