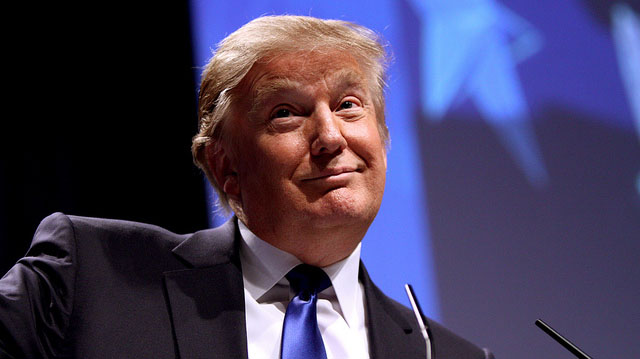 Tomorrow will be a really big day for America, or so real estate mogul and reality TV host Donald Trump has declared. He promises he will issue a “major” announcement on Tuesday at Manhattan’s Trump Tower. It’s anyone’s guess what the outspoken tycoon will say, but here are some possibilities.

A Celebrity Apprentice spin-off: Following the close of the show’s seventh season, with Leeza Gibbons edging out Geraldo Rivera for the cash prize, the series is becoming stale and needs to up the ante. Perhaps he’s announcing a merger with ABC’s similarly entrepreneurial show, Shark Tank, to create a show in which celebrity entrepreneurs are dropped into a tank of live sharks. If their pitches are worthy of moving to the next round, great! If not, well… And “you’re food” is a much better catch phrase than “you’re fired.”

Trump is filing for bankruptcy…again: If you could win an award for filing for corporate bankruptcy, Trump would have a ring for every finger on his check-signing hand. Since 1991, Trump’s corporations have filed for Chapter 11 bankruptcy four times. Tomorrow’s announcement could prove the fifth time is the charm!

He is filing for divorce…again: This would mean that the fellow who is no fan of gay marriage is going for a three-peat.

He is resigning from Twitter: Trump has found a natural outlet for his bombast on Twitter. Some might say he over utilizes the platform. But the tweets in his feed live in perpetuity for all of us admire from afar—except for the ones he has to delete. Here are a few of his best…or worst:

Our great African American President hasn’t exactly had a positive impact on the thugs who are so happily and openly destroying Baltimore!

“@krauthammer: On sale today. Things That Matter in paperback. With a new section on the Obama years. Book sucks!

I am the BEST builder, just look at what I’ve built. Hillary can’t build. Republican candidates can’t build. They don’t have a clue!

Isn’t it interesting that the tragedy in Paris took place in one of the toughest gun control countries in the world?

If @rihanna is dating @chrisbrown again then she has a death wish. A beater is always a beater–just watch!

He may or may not be running for president. Compared to the other possibilities, this will be a let-down, either way.