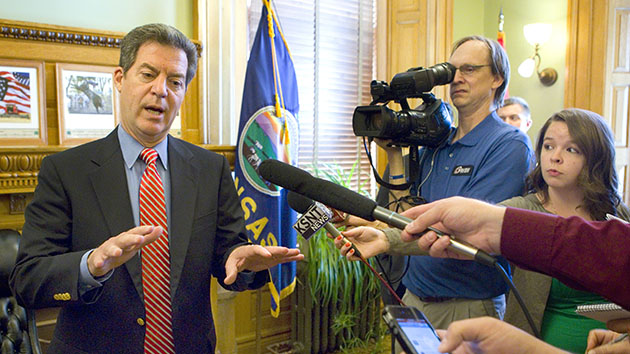 Since Republican Sam Brownback became governor of Kansas in 2011, he and his allies in the GOP-dominated state Legislature have implemented drastic tax cuts—part of a “real, live experiment” in conservative governance, as Brownback put it in 2012, that has resulted in precipitously falling revenues. But Brownback’s tax slashing hit a snag last year when the state Supreme Court ordered the Legislature to increase education funding, potentially forcing the governor to roll back his signature tax cuts in order to increase school spending. So conservatives in Topeka declared war on the court.

In the year since the court’s education decision in March 2014, conservatives in the Kansas Legislature have proposed giving the governor more power to pick state Supreme Court justices and making it easier to remove justices from the bench. They’ve voted to strip the state’s top court of its authority over lower courts and threatened to defund state courts if they rule against the Legislature in a key case. The escalating power struggle between the state’s three branches of government has put Kansas “on a direct collision course to a constitutional crisis,” says Ryan Wright, executive director of Kansans for Fair Courts, a nonprofit dedicated to keeping partisan politics out of the judicial selection process in Kansas.

The school funding issue, meanwhile, still hasn’t gone away. The current battle began in 2010, when a coalition of school districts sued the state, seeking to force the Legislature to reinstate school funding that was cut during the Great Recession, under a provision of the state constitution that mandates adequate levels of school funding. When Brownback took office in 2011, in the midst of the litigation, he prioritized tax cuts that have made it impossible to restore the funding due to dwindling revenues.

The litigation over education in Kansas is labyrinthine, but here’s the CliffsNotes version. In March 2014, the Kansas Supreme Court ruled that school funding was not equitable between rich and poor districts. The court ordered the Legislature to fix the equity issue right away while sending a second piece of the case—whether overall school funding was adequate—back to the district court, which last December ruled that spending was indeed inadequate. In early 2015, the Legislature passed a new school funding bill that a coalition of school districts argue undid increased funding to create equity between districts, prompting the issue to go back to the district court this month. Once that courts issues its ruling—possibly this week—the state Supreme Court is expected to take up both pieces (adequacy and equity) and could issue a final verdict on the issue this year. If the top court finds school funding too low, it could force the Legislature to make a choice: raise taxes in order to find enough money for schools, or buck the courts.

Because right now, Kansas lawmakers can’t pass a budget even without additional school funding, thanks to Brownback’s tax cuts.

Promising new jobs and a reinvigorated economy, Brownback and the Legislature slashed income tax rates in 2012 and 2013, reducing top earners’ liability by a quarter, and eliminated taxes on profits for about 200,000 small businesses, including multiple subsidiaries of Wichita-based Koch Industries, which brings in annual revenue more than $100 billion. But the economic boom the cuts were supposed to trigger never came. Instead, Kansas’ economy lagged, its credit rating was downgraded, and job growth slowed. By 2014, projected revenues had fallen by nearly $4 billion over the next six years. In the first four months of 2015, Kansas lost jobs. Lawmakers in Topeka are currently working overtime, at a cost of $43,000 per day to taxpayers, to plug an $800 million budget gap. Unwilling to raise taxes, the Legislature has thus far been unable to find the money the state needs.

After the state Supreme Court ordered the state to spend more on poorer school districts last March, the Kansas Legislature voted to strip the top court of some of its administrative authority, including the power to appoint chief judges in the state’s 31 district courts. Republicans claimed the move was unrelated to the education finance issue, but Democrats, judicial watchdogs, and education advocates saw it as punishment for the schools case. “Nobody will admit it, but I have no doubt that it was to pay the court back for the school finance ruling,” says Democratic state Sen. Laura Kelly. A state appeals court judge challenged the new law as an unconstitutional power grab—locking the Legislature and the courts in a battle over control of the state judicial system. That case is currently before a the same Kansas district court also determining the school finance issue.

Now, Brownback’s allies in the Legislature are using all the tools in their arsenal to sway the courts to rule their way on both the administrative power case and the school finance issue. Last month, conservative lawmakers drafted a budget for the state courts—taking the unusual step of separating the courts from the rest of the state budget—that ties funding for the entire Kansas court system to the outcome of the administrative authority case before the district court. The judicial budget includes a self-destruct button that would wipe out all funding for the state courts if any court halts the 2014 law reducing the Supreme Court’s authority or finds it unconstitutional. That budget still requires approval from both houses and the governor’s signature.

“Basically, lawmakers are attempting to extort Supreme Court justices to rule in the Legislature’s favor or be shut down,” the Kansas City Star editorialized, adding that conservative lawmakers’ “willingness to deprive Kansas citizens of a working court process is shocking.”

Conservatives’ efforts to undermine the state Supreme Court haven’t stopped there. Currently, a nominating commission selects candidates for the Supreme Court and the governor picks justices from that pool. But in his State of the State address in January, Brownback said the current system was undemocratic and called for the Legislature either to replace it with partisan judicial elections or to give the governor the authority to appoint judges. Resolutions to make both changes via constitutional amendment have been introduced in the Legislature, where they need a two-thirds vote, followed by a referendum. Other proposed resolutions aimed at declawing the court include making judges subject to recall elections and allowing them to be ousted if just a third of voters opt not to retain them.

But Brownback’s allies have thus far failed to muster the supermajority needed to change the constitution, even though Republicans hold well more than two-thirds of both chambers. (Brownback’s tax cuts have deeply divided the Legislature’s overwhelming Republican majority, and a contingent of moderate GOPers believe the cuts are unsustainable—and Brownback’s work to oust Republican moderates in the 2012 elections didn’t earn him any affection from the party’s more moderate flank either.) So conservatives have floated a number of speedier statutory changes to bring more supportive justices to the bench. One bill would lower the retirement age to create vacancies sooner; another would split the court into two separate civil and criminal courts, which would create more vacancies that Brownback could fill; and a third would expand the grounds for impeachment of a Supreme Court justice to include such ambiguous misdeeds as “attempting to subvert fundamental laws and introduce arbitrary power,” “attempting to usurp the power of the legislative or executive branch of government,” and “failure to adequately supervise subordinate employees.”

“Basically, those are additional threats that are looming over the court’s head,” says Wright, the advocate for an nonpartisan judiciary, since the high court will soon revisit the issue. In the meantime, Kansas conservatives are doing all they can to deter the justices from increasing school funding—even if it means defunding or reshaping the court to get their way.