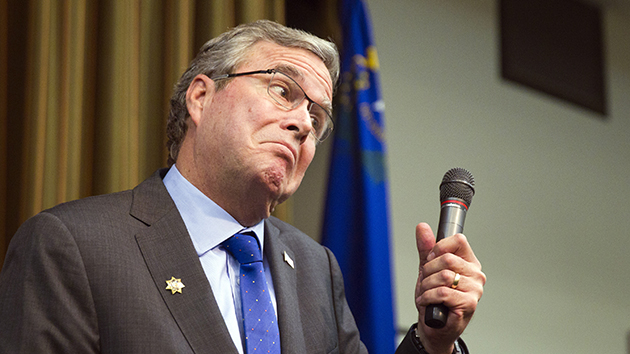 Jeb Bush launched his campaign on Monday with a sharp jab at the Washington establishment. “We don’t need another president who merely holds the top spot among the pampered elites of Washington,” huffed this member of a political dynasty that has often held power in DC. “We need a president willing to challenge and disrupt the whole culture in our nation’s capital.” Yet, as Bush embarks on his presidential bid, he has surrounded himself with Beltway insiders who have long been part of what he calls the “mess in Washington.” Many of his advisers served in the presidential administrations of his father and brother. Others were senators and representatives. Of course, several are lobbyists.

Here are some of the special-interest influence peddlers and Washington operators whom Bush has enlisted for his campaign:

Vin Weber: The six-term Minnesota congressman turned consultant and lobbyist has been a Jeb Bush supporter for months but a prominent DC power player for years. Weber is a partner at Mercury, a lobbying firm, and his clients have included the government of Qatar, Hyundai, and eBay. He was once called “one of the most influential Republican lobbyists” by Washingtonian magazine. He came under scrutiny in 2013 when he was a registered lobbyist for the European Centre for a Modern Ukraine, which was formed by a Ukrainian politician accused of trying to roll back some democratic gains in the country at the time.

Lincoln Diaz-Balart: A former congressman from Florida, Diaz-Balart has his own lobbying group, Western Hemisphere Strategies, which has lobbied Congress on behalf of textile companies in Guatemala and El Salvador. He has also lobbied on behalf of MM Law, LLC, a firm that represents victims of international terrorism, according to Senate lobbying records.

James Baker: Baker epitomizes the Washington establishment. He was the White House chief of staff and treasury secretary for President Ronald Reagan and secretary of state for President George H.W. Bush. Baker was also a senior counselor and equity partner at the Carlyle Group, a global multibillion dollar investment group that relies on the political connection of its principals, and he is currently a senior partner at Baker Botts, a Houston law firm that has represented some of the biggest companies around, including OAO Gazprom, the Russian natural gas behemoth, and Halliburton.

Michael Hayden and Porter Goss: Both Hayden and Goss are former CIA directors. Hayden was also director of the National Security Agency from 1999 to 2005. He is now a principal at the Chertoff Group, a security consulting firm created by Michael Chertoff, a former secretary of homeland security. Goss, who served in the House of Representatives for 15 years, was director of the CIA from 2004 to 2006 and is now a senior adviser with Dickstein Shapiro, a major legal and lobbying firm in Washington. The Intercept reported that he is a registered lobbyist for the government of Turkey.

Michael Chertoff: After his time in government, Chertoff cashed in, working for two separate lobbying firms (Latham & Watkins and Covington & Burling) and three private companies (KeyPoint Government Solutions, BAE Systems, and TASC, Inc.) before starting his own consulting group, which has reportedly tried to win contracts for manufacturers of body scanners.

Paul Wolfowitz: The deputy defense secretary under President George W. Bush, Wolfowitz, a neocon Washington fixture, was an integral part of the invasion of Iraq. He went on to have a tumultuous run as president of the World Bank. (Other Iraq War alumni who are now assisting the Jeb Bush campaign include Stephen Hadley and Meghan O’Sullivan.)

Tom Ridge: The former governor of Pennsylvania, secretary of homeland security, and six-term congressman once told Stephen Colbert that he wasn’t a lobbyist. But his post-government record includes an awful lot of consulting for major companies and the US Chamber of Commerce. Ridge Global, his firm, says it offers “strategic consulting services.” One client was reportedly the government of Albania, which was trying to join NATO in 2008.

Michael Mukasey: Mukasey was US attorney general for the second President Bush and went on to become a partner at Debevoise & Plimpton, a major law firm that also engages in lobbying activity. Mukasey helped one of the firm’s clients, the US Chamber of Commerce, push to weaken the Foreign Corrupt Practices Act.

John Negroponte: A former US ambassador to Iraq, Honduras, Mexico, and the Philippines, John Negroponte is an old foreign-policy hand who has worked at the State Department and the United Nations. These days, he is the vice chairman of McLarty Associates, a Washington-based global strategies firm that consults for Fortune 500 clients.

These guys are all members of the Washington elite that Jeb Bush the Populist has decried. Yet they are helping Bush. They must not feel too threatened by his call to disrupt the culture in the nation’s capital.