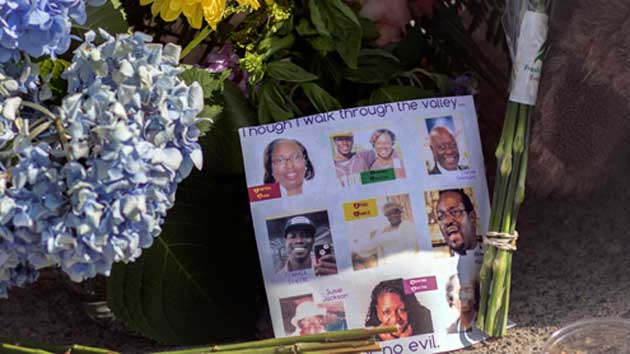 Flowers and notes of hope and support from the community line the sidewalk on Friday in front of the Emanuel AME Church in Charleston, South Carolina.Stephen B. Morton/AP

Before he opened fire in a historic black church in Charleston, killing nine people, Dylann Roof, the alleged shooter, was photographed wearing flags of former racist regimes in Africa that became white supremacist symbols. When he committed the murders, he reportedly told the victims, “I have to do it. You rape our women and you’re taking over our country and you have to go.” And after he was arrested, he confessed to authorities that he committed the crime to start a “race war.“

Yet when Jeb Bush addressed an audience of evangelicals on Friday morning, he became the latest Republican presidential candidate to say he had no idea whether racism motivated this horrific attack.

“I don’t know what was on the mind or the heart of the man who committed these atrocious crimes,” Bush told the crowd gathered for the annual Faith and Freedom Coalition Conference in Washington, DC. He called the crime an “evil act of aggression” and said that “this has had a big impact on me.” But he didn’t refer to the racial motivations of the 21-year-old Roof.

Huffington Post reporter Laura Bassett later asked the former Florida governor if the attacks were racially motivated. Bush replied, “I don’t know.” He then clarified that it “looks to me like it was,” but reiterated that he didn’t know.

Other Republican presidential hopefuls have downplayed or sidestepped the racial aspects of the massacre in Charleston on Wednesday. Asked about his state’s continued use of the Confederate flag, Sen. Lindsey Graham of South Carolina explained that “this is part of who we are.” He explained that though some people regard the flag as a racist symbol, “the problems we have in South Carolina and through the world are not because of movies or symbols—it’s because it’s what’s in people’s hearts.”

Former Sen. Rick Santorum of Pennsylvania told AM970 radio host Joe Piscopo on Thursday that “this is obviously a hate crime,” but he described it as foremost an assault “on religious liberty.” He continued, “We don’t know the rationale, but what other rationale could there be? You’re sort of lost that someone would walk into a Bible study at a church and indiscriminately kill people.”