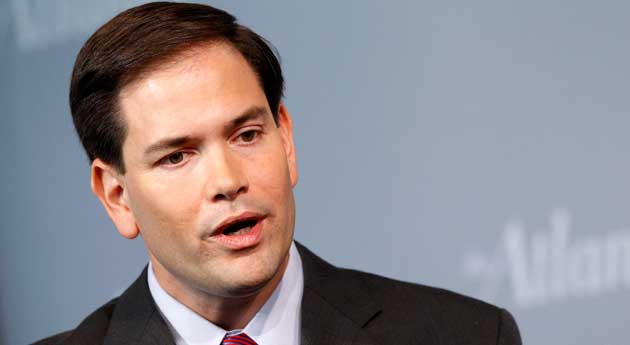 At the January meeting of the Koch brothers’ donor network, Sen. Marco Rubio (R-Fla.) scoffed at the idea that the deep-pocketed contributors he had come to court for his presidential bid want anything in return for all the money they pump into politics. “I don’t know a single person in this room has ever been to my office,” he told ABC News’ Jonathan Karl, who was moderating a panel that included Rubio.

The attendees at that event were not publicly identified, but a number of major donors to the Koch network and participants in earlier conferences organized by the billionaire brothers spent tens of millions of dollars lobbying Washington last year. And a number of lobbyists employed by organizations represented at Koch confabs have donated to Rubio—and hosted fundraisers for him.

It’s possible the donors Rubio was hoping to impress at the January conference—organized by the Koch brothers as part of their effort to raise as much as $890 million to sway the 2016 elections—are writing checks to candidates for purely altruistic reasons. But it’s not likely. In Washington, money spent on hiring lobbyists often goes hand in hand with money spent on candidates, and according to a new report, many Koch network donors are playing the influence-peddling game.

Liberal watchdog group Citizens for Responsibility and Ethics in Washington (CREW) has released a study listing at least 22 companies in the Koch network that hired a registered lobbyist in 2014. Some of these companies spent significant sums on lobbying. Koch Industries, the conglomerate personally overseen by Charles and David Koch, spent $13.8 million on lobbying in 2014, and Occidental Petroleum—whose CEO, Stephen Chazen, donated $125,000 to the Kochs’ super-PAC—spent more than $9.1 million on lobbying.

CREW calculates that these 22 companies spent at least $35 million on lobbying in 2014—a sign they probably do want something from Rubio and other GOP candidates. The full report, including methodology, can be found here.

Moreover, if Rubio’s remark is taken literally, no one will ever know if he was telling the truth about not meeting donors or their lobbyists in his office. But Rubio is familiar with some of the key players in the Koch network. For example, there’s Wayne Berman, the chief lobbyist for the Blackstone Group, a private investment firm. (Its CEO and chairman, Stephen Schwarzman, lives in the same Manhattan apartment building as David Koch and attended a Koch brothers conference in 2010 in Aspen, Colorado.) Just 13 days before Rubio denied that any one in the audience had ever come to his office looking for a favor, Berman hosted a fundraising lunch for Rubio at Patroon, a New York City restaurant where a burger costs $24. Several months later, on April 15, another Blackstone lobbyist, Justin Daly, and a lobbyist for Koch Industries, Sam Geduldig, co-hosted a fundraiser for Rubio at a townhouse on Capitol Hill.

The Koch network is loaded with firms that spend big bucks on lobbyists who seek preferential treatment from lawmakers. So is Rubio clueless, or unwilling to acknowledge this basic fact of Washington life?