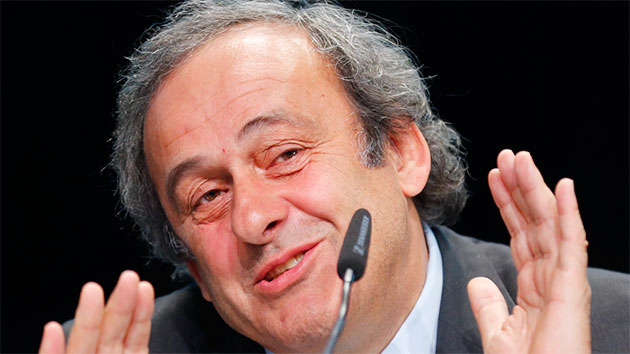 UEFA President Michel Platini at the FIFA congress that elected Sepp Blatter to a fifth term in May 2015.Michael Probst/AP

Michel Platini, the legendary former French midfielder who now runs Europe’s soccer governing body, is already the oddsmaker’s favorite to become the next head of FIFA.

He also kind of sucks.

Blatter unexpectedly resigned on Tuesday, just days after winning a fifth term as FIFA president. His resignation was prompted by the arrest of FIFA officials last week as part of a Justice Department investigation into corruption and bribery at the organization. Though Blatter professed shock and said he had no intention of leaving FIFA, the widening scope of the investigations—along with huge global media coverage and schadenfreude—finally drove Blatter out of office.

“FIFA needs a profound overhaul,” he said at the announcement.

Platini, who has been head of the Union of European Football Associations since 2007, emerged in recent years as a high-profile opponent of Blatter. He criticized the now-resigned FIFA head over a range of issues, though ones that, until Platini was gearing up for a potential run at the FIFA presidency, frequently dealt with administrative sniping instead of serious ethical issues.

Those attacks, and Platini’s support for measures like salary caps and giving more spots in the wildly popular Champions League to clubs from small countries, have given him the vague air of a reformer. But the UEFA head was also a vocal supporter of the Qatar 2022 World Cup bid that toppled Blatter and has so far killed hundreds of the guest workers building stadiums and other infrastructure for the tournament.

Months after the vote, Platini’s son, Laurent, was made chief executive of a Qatari sports equipment company called Burrda; Platini denies any links between the vote and his son’s job.

Yet the UEFA head hasn’t backed off of his support of the tournament. “I have no regrets at all,” Platini said last year to French sports newspaper L’Equipe. “I think it was the right choice for FIFA and world football.”

As Philippe Auclair pointed out in 2013 in soccer magazine Eight By Eight, such statements make Platini “the only FIFA executive-committee member to go on the record defending his choice.”

Other great moments from Platini’s time in office include soft-pedaling his own policies aimed at reining in rich clubs—one of them a Qatari-owned Paris juggernaut—and warning players not to leave games in protest against the racist chants that plague games in numerous European countries—including Russia, the host of the next World Cup.

After Blatter resigned on Tuesday, FIFA said it would elect his replacement at special congress to be held a minimum of four months from now. That gives soccer officials ample time to find a real reform candidate from outside the sport’s usual suspects—but don’t hold your breath.