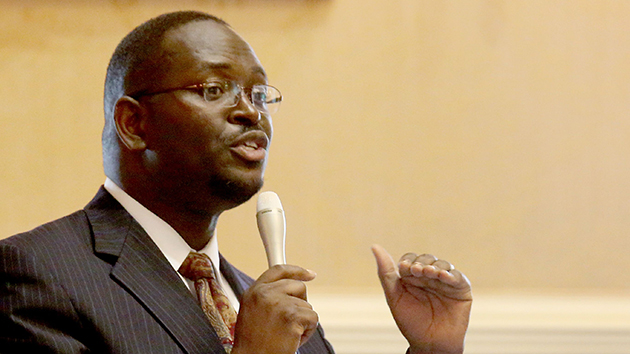 One of the victims of Wednesday’s horrific shooting at the Emanuel AME Church in Charleston, South Carolina, was state Senator Clementa Pinckney, the church’s pastor. Much has already been written about Pinckney’s dedication to public service from a young age, and his rich life in the church. My colleagues are updating a full list of the nine victims as more information becomes available. In the meantime, here’s another memorable moment from Pinckney’s leadership in the South Carolina Senate.

Back in May, the senator delivered this stirring (and now haunting) call to action following the death of Walter Scott—the unarmed black man who was shot and killed by a white police officer in North Charleston, just six miles north of where Pinckney and others were murdered. Here’s Pinckney on the Senate floor, rallying support for the adoption of police body cameras. Watch and read below:

Today, the nation looks at South Carolina and is looking at us to see if we will rise to be the body, and to be the state that we really say that we are. Over this past week, many of us have seen on the television, have read in newspapers, and have seen all the reports about Walter Scott, who, in my words, was murdered in North Charleston. It has really created a real heartache and a yearning for justice for people, not just in the African American community, but for all people, and not just in the Charleston area, or even in South Carolina, but across our country.

Ladies and gentlemen of the Senate, when we first heard on the television, that a police officer had gunned down an unarmed African American in North Charleston by the name of Walter Scott, there were some who said, “Wow. The national story has come home to South Carolina.” But there were many who said, “There is no way that a police officer would ever shoot somebody in the back 6, 7, 8, times.” But like Thomas, when we were able to see the video, and we were able to see the gun shots, and when we saw him fall to the ground, and when we saw the police officer come and handcuff him on the ground, without even trying to resuscitate him, without even seeing if he was really alive, without calling an ambulance, without calling for help, and to see him die face down in the ground as if he were gunned down like game, I believe we all were like Thomas, and said, “I believe.”

…We have a great opportunity to allow sunshine into this process. It is my hope that as South Carolina senators, that we will stand up for what is best and good about our state and really adopt this legislation and find a way to have body cameras in South Carolina. Our hearts go out to the Scott family, and our hearts go out to the Slager family, because the Lord teaches us to love all, and we pray that over time, that justice be done.