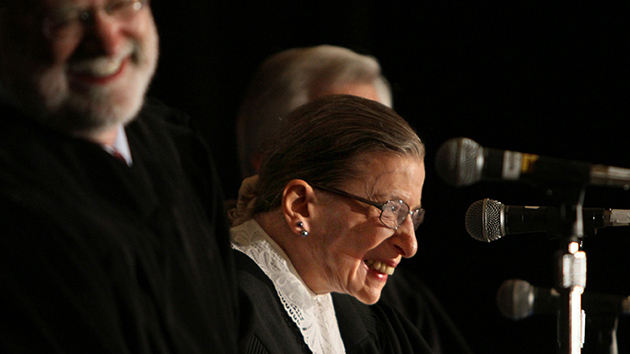 In a victory for opponents of partisan gerrymandering, the Supreme Court on Monday upheld the use of an independent commission to draw Arizona’s congressional districts. Writing for a narrow majority in the 5-4 ruling, Justice Ruth Bader Ginsburg touted the importance of direct democracy and making sure the power of the people is not hijacked by its elected representatives.

“The people of Arizona turned to the initiative to curb the practice of gerrymandering,” Ginsburg wrote. “In so acting, Arizona voters sought to restore ‘the core principle of republican government,’ namely, ‘that the voters should choose their representatives, not the other way around.'” Ginsburg’s opinion was joined by the three other liberal-leaning justices and Justice Anthony Kennedy.

The case hinged on the meaning of the word “legislature.” According to the Constitution, the “times, places and manner of holding elections for Senators and Representatives, shall be prescribed in each state by the legislature thereof.” The Arizona legislature argued that this should be read to imply that the independent commission is unconstitutional because it cut the legislature out of the process of drawing districts. The legislature was represented by superstar lawyer Paul Clement, a former solicitor general under President George W. Bush and a go-to for Republicans in big cases, including the 2012 case that upheld the Affordable Care Act’s individual mandate, the 2013 case that invalidated part of the Defense of Marriage Act, and the 2014 Hobby Lobby case.

The commission, represented by another former solicitor general, Bill Clinton appointee Seth Waxman, argued that at the time the Constitution was written, the word “legislature” was more broadly interpreted to mean “the body that makes the laws.” And since the people can also constitute a body that makes laws, he argued, they have the power to create an independent commission through a ballot initiative. Justice Sonia Sotomayor took this view during oral arguments. “If a state constitution says that the people hold the power and they can choose a commission or however else they want to do it, isn’t that the legislative process?” she asked.

Ginsburg and the others in the majority agreed. “It would thus be perverse to interpret ‘Legislature’ in the Elections Clause to exclude lawmaking by the people, particularly when such lawmaking is intended to advance the prospect that Members of Congress will in fact be ‘chosen . . . by the People of the several States,'” Ginsburg wrote, noting that congressional maps drawn by legislatures are often rigged to keep one party in power.

Ginsburg’s opinion sparked strongly worded dissents from three of the court’s four conservatives: Chief Justice John Roberts, Antonin Scalia, and Clarence Thomas, who accused the majority of ignoring the plain text of the Constitution and the historical context in which it was written. Good government groups, meanwhile, hailed the opinion as a triumph against partisan takeover of elections.

In his dissent, Roberts accused the majority of performing a “magic trick” with the wording of the Constitution. His dissent begins with an account of Arizona’s passage of the Seventeenth Amendment to the Constitution, providing for the direct election of US senators. “What chumps!” the chief wrote. “Didn’t they realize that all they had to do was interpret the constitutional term ‘the Legislature’ to mean ‘the people’? The Court today performs just such a magic trick with the Elections Clause.”

Scalia signed on to Roberts’ dissent and also wrote his own passionately worded one. “[T]he majority’s resolution of the merits question (‘legislature’ means ‘the people’) is so outrageously wrong, so utterly devoid of textual or historic support, so flatly in contradiction of prior Supreme Court cases, so obviously the willful product of hostility to districting by state legislatures, that I cannot avoid adding my vote to the devastating dissent of the Chief Justice.”

Though the case was about Arizona, numerous election laws across the country that were passed by ballot initiative were at risk. As Justice Elena Kagan noted during oral arguments in March, there are “zillions” of laws regarding elections that were passed by voters without the involvement of the legislature, including those requiring photo IDs to vote and allowing voting on machines and voting by mail. “So would all these be unconstitutional as well?” she asked.

By siding with Arizona’s commission, the court acknowledged the problem of partisan gerrymandering. “[W]hen the district-drawing process is controlled by elected officials, the result too often is a process dominated by self-interest and partisan manipulation,” political scientists Thomas Mann and Norman Ornstein wrote in an amicus brief supporting the independent commission in the case. “By insulating redistricting decisions from direct partisan influence, commissions like Arizona’s offer a crucial first step toward breaking the cycle of partisanship and dysfunction perpetuated by legislative gerrymandering. The States’ efforts to use such commissions to tackle one of America’s most intractable political problems have great potential and are fully consistent with the States’ traditional role as laboratories of democracy.” The Supreme Court agreed.