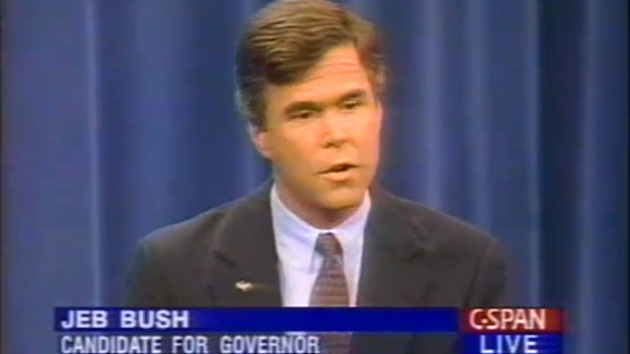 It was Jeb Bush’s first campaign. In 1994, the 41-year-old son of the former president was the Republican nominee challenging Democratic Gov. Lawton Chiles. The race was close, with several political handicappers predicting Bush would dethrone Chiles. Then in the final days, Bush released what his campaign considered to be a game-changing ad. The TV spot featured a Florida woman named Wendy Nelson, who happened to be a Bush campaign volunteer. Fourteen years earlier, her 10-year-old daughter had been kidnapped on her way to school and then murdered. Her murderer was apprehended and in 1981 sentenced to die. Yet all these years later, he remained on death row. In the Bush ad, Nelson said, “Her killer is still on death row, and we’re still waiting for justice. We won’t get it from Lawton Chiles because he’s too liberal on crime.”

The ad ignited a firestorm. Chiles and his camp decried Bush for brazenly exploiting this horrific crime, noting that a previous governor had signed a death warrant for the murderer (but an appeal was pending) and that on Chiles’ watch as many convicted killers had been executed as had been put to death during the stints of previous Republican and Democratic governors (eight or nine a term). Chiles’ team also noted that he had moved to expedite the death penalty appeals process.

As Stephen Marks, a press aide for Bush’s 1994 gubernatorial campaign, later recalled in his book, Confessions of a Political Hitman,

At the time, the Orlando Sentinel reported, “Bush has admitted that Chiles could not have accelerated Mann’s execution by signing a warrant, but he will keep airing the Nelson ad.” And Chiles compared the ad to the infamous Willie Horton ad that had been aired during the 1988 presidential contest to help Bush’s father defeat Michael Dukakis. The Sun Sentinel newspaper published a scathing editorial that blasted Bush for “running a shamelessly false, irresponsible and tasteless 30-second TV ad.” The editorial denounced Bush’s “utter contempt for the truth,” noting, “If any politician should be criticized for his involvement with this tragedy, it is Jeb Bush, who is using the pain and suffering of a mother’s loss to smear and distort Chiles’ record on the death penalty.” The newspaper called him a “demagogue.”

The ad was the hot topic when Chiles and Bush faced off for a televised debate on November 1, 1994. Tossing out the first question, moderator Tim Russert noted that Bush had conceded that Chiles could not have accelerated the execution process for this criminal and asked Bush, “Why do you continue to air the commercial, which is, by your own admission, misleading?” Bush responded by saying the commercial was no longer being aired “because it completed.” But, Bush added, “I would have kept it on for longer.”

Bush did not explain why he would have stuck with an ad that his own press aide later called an untruth or a lie. Instead, he went on the attack and slammed Chiles for somehow not speeding up the execution process. He said the ad was “appropriate” because “a symbol of crime needs to have a human face on it…I do believe [Chiles] has been a liberal on crime and soft on crime.”

Chiles replied that he had long supported capital punishment and had overseen eight executions. He then turned toward his foe and said: “You put on this ad, Jeb. You knew it was false. You even admitted it was false…I’m ashamed that you would use the agony of a mother and the loss of her daughter in an ad like this. It’s demagoguery, pure and simple. Every paper in the state has looked at that ad; everyone of them has said it is a new low. Your father had the record with the Willie Horton ad, but you’ve outdone that.” Chiles’ supporters in the audience cheered loudly.

Bush held fast and would not admit the ad was an error.

On Election Day, Bush went from once holding a 10-point lead over Chiles to losing by 2 points, even as Republicans nationwide were sweeping other contests and gaining control of the US House of Representatives for the first time in decades. Years later, Marks would cite the commercial that Bush refused to disavow as a “critical mistake” and the “nail in Bush’s coffin.” Perhaps if Bush had eschewed this attack ad or renounced it, he might have won and entered the governor’s mansion four years earlier than he eventually did. Which could have positioned him for a presidential run in 2000. Instead, the Bush who entered that contest was George W., who in 1994 had won his governor’s race in Texas. That year, W. also pummeled the Democratic incumbent—Ann Richards—for being soft on capital punishment, though she had presided over 45 executions as governor. But George, unlike Jeb, managed to do so without sparking a backlash. What a difference that made.